This Day in History: March 25th 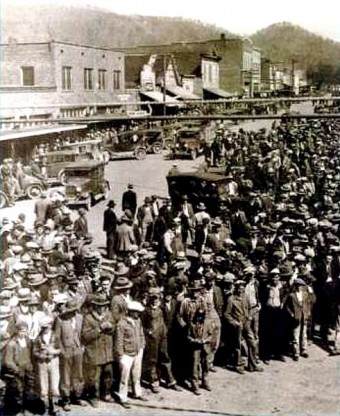 On March 25, 1931 a group of black and white young people “hoboed” their way on a freight train in search of work during the Great Depression. There was an altercation between the youths, and the white kids were put off the train.

The white youths reported this “outrage” to a local sheriff, who rounded up a posse to meet the train at the next stop to arrest the black teenagers. As they were searching the train, they also happened upon two young white women who accused the black youths of raping them. In truth, the girls had had sex with a couple of the white boys, and, afraid of being found out, made up a story that the black kids had sexually assaulted them.  As one of the girls, Ruby Bates, later testified when asked if the girls had been raped or harassed in any way by the black youths:

No sir. I told it just like Victoria did because she said we might have to stay in jail if we did not frame up a story after crossing a state line with men. [Victoria said] she “didn’t care if all the Negroes in Alabama were put in jail.”

The trial of the nine young defendants was held in Scottsboro, Alabama. All were found guilty by the all-white jury, and, save for the youngest defendant who was aged 12, all were sentenced to death, the standard punishment for a black man who raped a white woman in Alabama.

The announcement of the verdicts sparked outrage from the north. The Communist Party U.S.A. began handling the case, and in 1932 the Supreme Court over-turned the convictions on the grounds that the defendants were denied sufficient legal representation in a capital case.

One of the accused, Haywood Patterson, was given a new trial by the state of Alabama, but the end result was the same as before. But this time the trial judge, James Horton, chose to set aside the verdict, as he did not believe that Patterson had committed the crime he was accused of. The decision to follow his conscience cost the judge his job in the next election.

Defendant Clarence Norris was also re-tried and again sentenced to death, but once again the Supreme Court stepped in, over-turning his conviction in 1935, pointing out that black people had been excluded from serving on the juries.

Alabama put Haywood Patterson on trial for a third time, won a conviction and sentenced him to 75 years in prison. A seemingly endless loop of re-trials of the defendants led to more re-convictions and the inevitable appeals, until common sense finally prevailed and the four youngest defendants were freed, and all the others, save Patterson, were later paroled. Patterson escaped from prison in 1948, and was convicted and imprisoned for manslaughter three years later. He died in prison.

Clarence Norris, the last surviving member of the group, went north after he was paroled in 1946, and the governor of Alabama granted him a full pardon in 1976.