February 3, 2014 Emily Upton
Shany asks: Why is there no E in the grading scale? 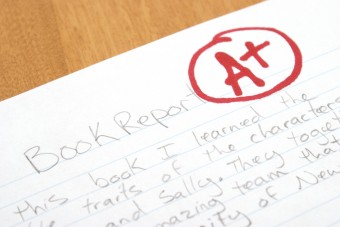 Some schools do hand out E letter grades instead of an F, but they are in the minority. A majority of schools in the United States, particularly beyond primary age, give grades of A, B, C, D, or F.

Rather than a failure on the part of academic institutions to know the alphabet, the simple answer is that “F” stands for “fail.” The other four grades are more or less considered “passing” (though in some districts a D is also a failing grade), which is why they go in alphabetical order. The F is considered separate as it denotes a failing grade, and does not need to go in alphabetical order. It just so happens that “fail” starts with a letter that skips one letter alphabetically on the scale.

That said, E was used at one point. The first college in the United States to use a grading scale similar to the one we know today was Mount Holyoke College, an all-women’s university in Massachusetts.

Before that, Yale used a ranking system in 1785 where “optimi” was the highest mark, followed by second optimi, inferiore (“lower”), and pejores (“worse”). William and Mary ranked students by number, where No. 1 was the first in their class and No. 2 students were “orderly, correct and attentive.”

In 1883, there’s a single reference to a student earning a “B” at Harvard, but historians haven’t found additional documentation to back up the idea that a letter grade system was actually in place at that point. It is known that just a few years later, Harvard had a system of Classes in place—students were either Class I, II, III, IV, or V, with V being failing.

That brings us back to the 1887 Mount Holyoke system, which looked something like this:

Over the years, the letter grading scale became popular across colleges and high schools alike. A lot of schools skipped E and went straight to F. Apparently, some teachers were concerned that students and parents thought E stood for “excellent,” though there is no evidence suggesting that they thought A stood for “awful,” so it’s possible that schools were just trying to simplify the scale. After World War II, some schools—many in the Midwest—decided to go back to E, getting rid of F.

In truth, any letter could stand in for E or F and still mean the same thing. Some schools use “U” for “unsatisfactory” or N for “no credit.” Educators could use just about any letter and it would amount to the same thing. It is simply an indicator of a non-passing grade.

The grading scale itself has been marked with an F (or E, or U, or N) by some people who believe it is no longer a relevant way to judge students’ work. For one thing, there are variations across institutions. Some schools use + and -; some don’t. Some say an A is 90% and up, or 93% and up, or 95% and up. Some consider a D to be a failing grade rather than a passing one.

Critics of the grading scale believe a written analysis of students’ work would be more effective in terms of feedback, but they recognize that students and parents probably wouldn’t read them and teachers, who are often overworked as it is, don’t have time to write them anyway. Letter grades are just an easy way to generalize a student’s performance; so despite the discrepancies between schools, they’ll probably be around for a long time.