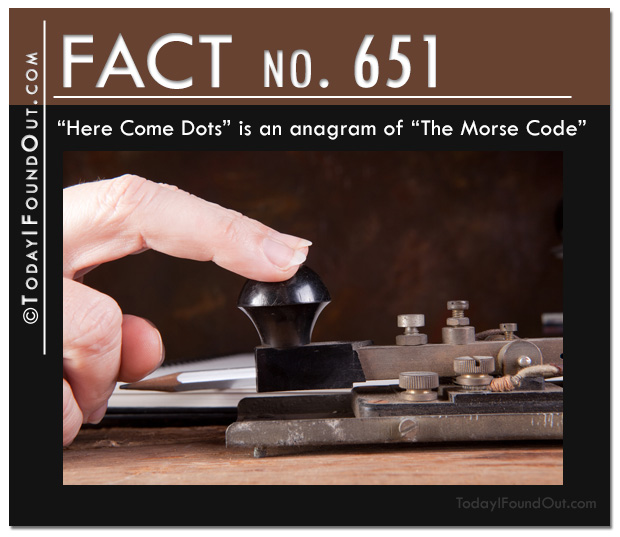 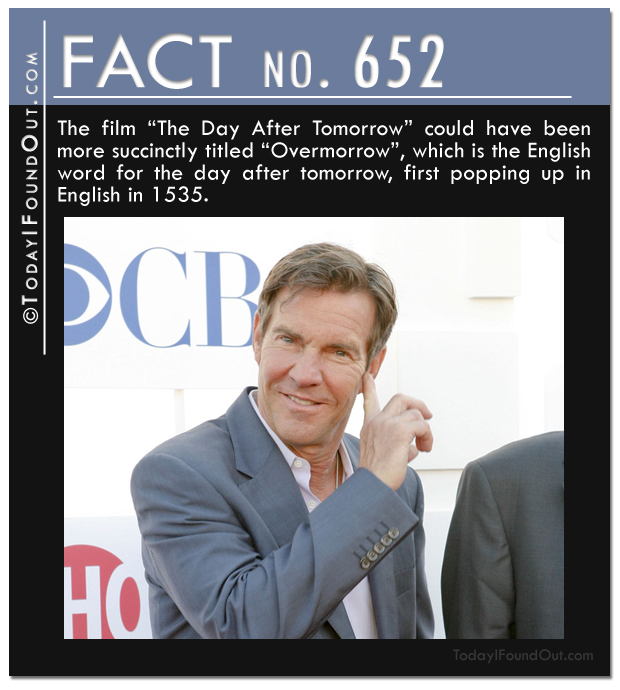 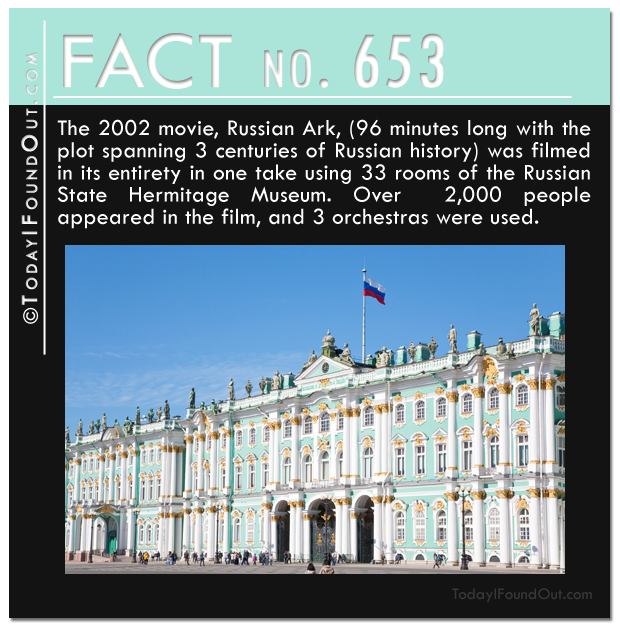 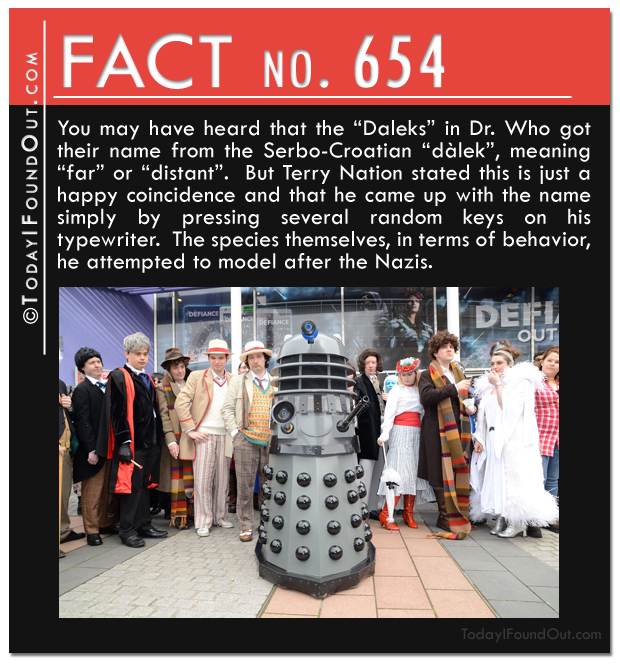 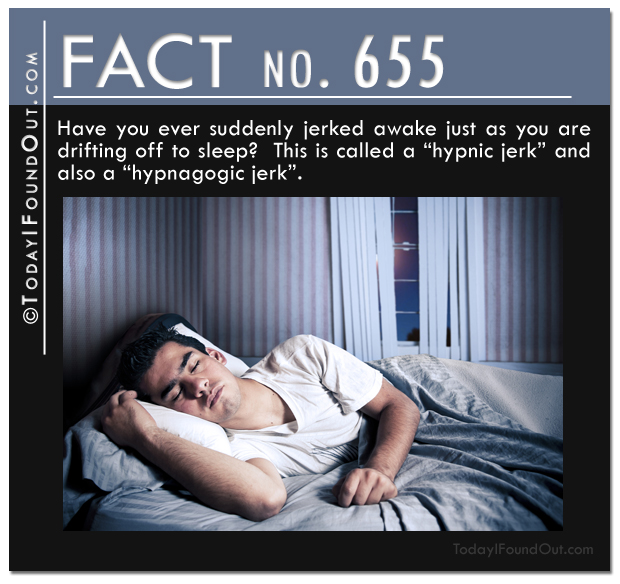 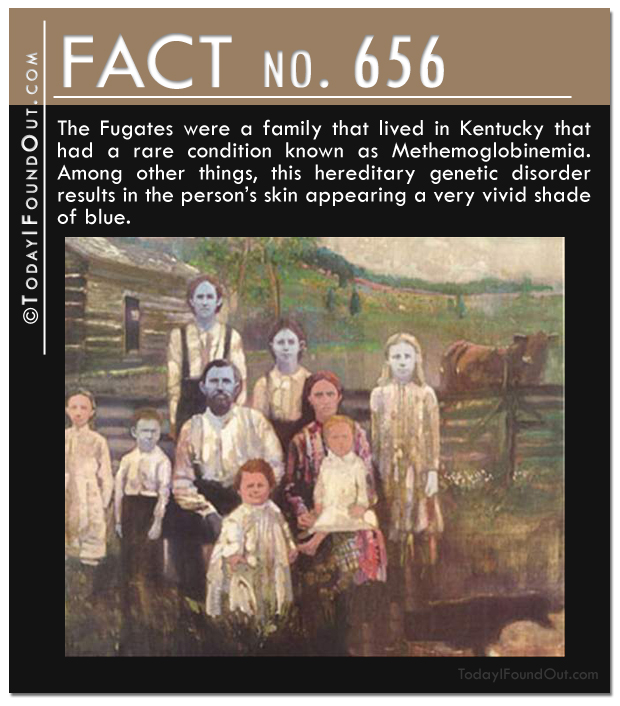 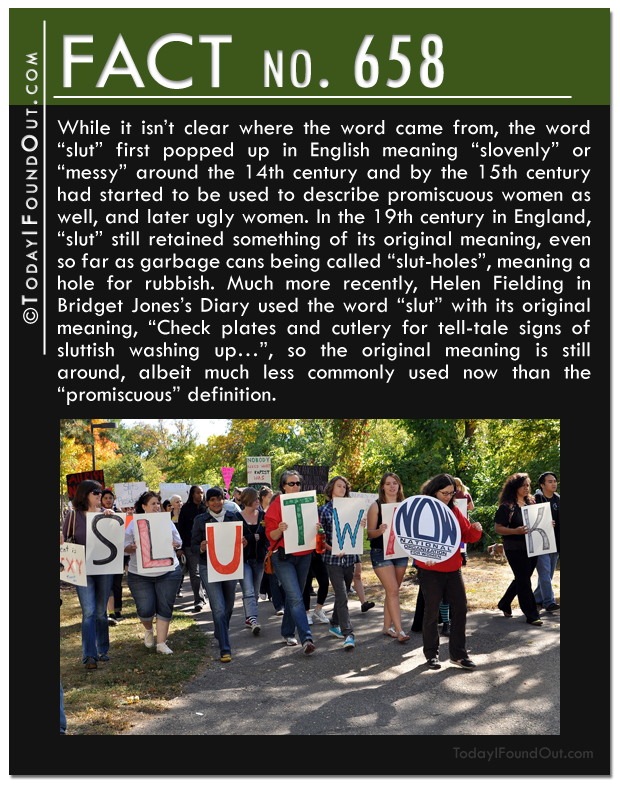 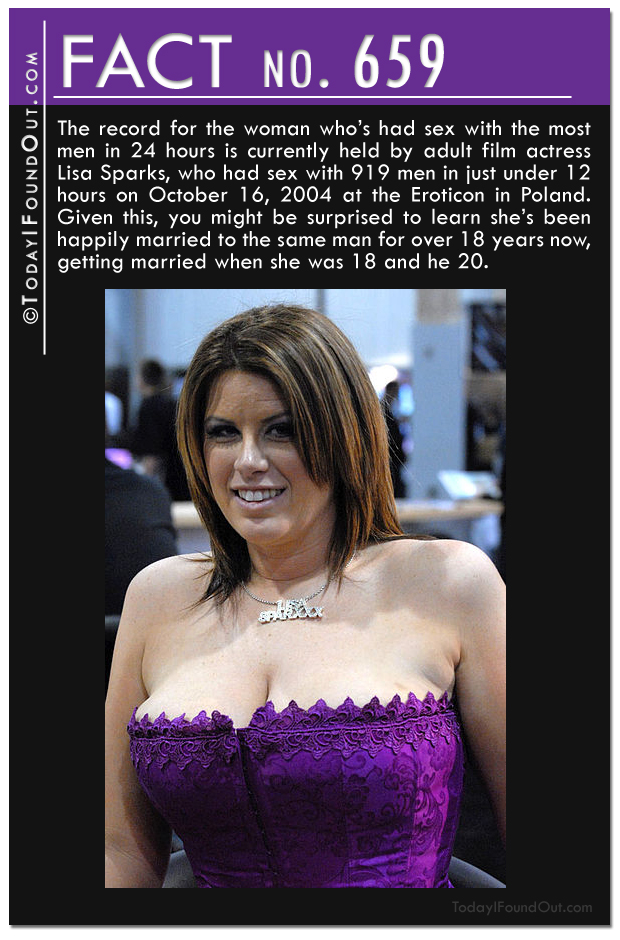 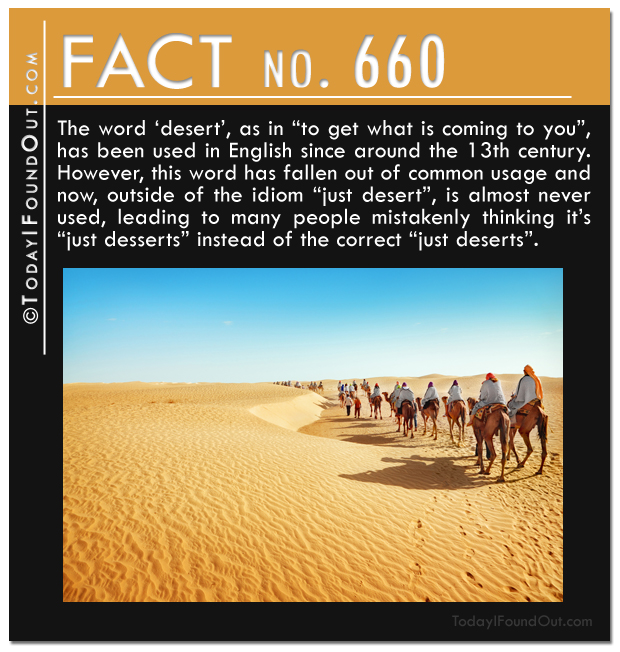 Text Version-
Fact 651: “Here Comes Dots” is an anagram of “The Morse Code”

Fact 652: The film “The Day After Tomorrow” could have been more succinctly titled “Overmorrow”, which is the English word for the day after tomorrow, first popping up in English in 1535.

Fact 653: The 2002 movie, Russian Ark, (96 minutes long with the plot spanning 3 centuries of Russian history) was filmed in its entirety in one take using 33 rooms of the Russian State Hermitage Museum. Over 2,000 people appeared in the film, and 3 orchestras were used.

Fact 654: You may have heard that the “Daleks” in Dr. Who got their name from the Serbo-Croatian “dàlek”, meaning “far” or “distant”. But Terry Nation stated this is just a happy coincidence and that he came up with the name simply by pressing several random keys on his typewriter. The species themselves, in terms of behavior, he attempted to model after the Nazis.

Fact 655: Have you ever suddenly jerked awake just as you are drifting off to sleep? This is called a “hypnic jerk” and also a “hypnagogic jerk”.

Fact 656: The Fugates were a family that lived in Kentucky that had a rare condition known as Methemoglobinemia. Among other things, this hereditary genetic disorder results in the person’s skin appearing a very vivid shade of blue.

Fact 657: The two women behind “Ask Ann Landers” and “Dear Abbey” were feuding twin sisters- Esther Lederer and Pauline Phillips respectively. The source of their dispute was reportedly the fact that after Esther took over the Ann Landers column in 1955 (with the original writer being Ruth Crowley from 1943-1955), Pauline decided to start up her own competing column with the same theme, “Dear Abby”. However, they supposedly settled their differences shortly before Esther died in 2002.

Fact 658: While it isn’t clear where the word came from, the word “slut” first popped up in English meaning “slovenly” or “messy” around the 14th century and by the 15th century had started to be used to describe promiscuous women as well, and later ugly women. In the 19th century in England, “slut” still retained something of its original meaning, even so far as garbage cans being called “slut-holes”, meaning a hole for rubbish. Much more recently, Helen Fielding in Bridget Jones’s Diary used the word “slut” with its original meaning, “Check plates and cutlery for tell-tale signs of sluttish washing up…”, so the original meaning is still around, albeit much less commonly used now than the “promiscuous” definition.

Fact 659: The record for the woman who’s had sex with the most men in 24 hours is currently held by adult film actress Lisa Sparks, who had sex with 919 men in just under 12 hours on October 16, 2004 at the Eroticon in Poland. Given this, you might be surprised to learn she’s been happily married to the same man for over 18 years now, getting married when she was 18 and he 20.

Fact 660: The word ‘desert’, as in “to get what is coming to you”, has been used in English since around the 13th century. However, this word has fallen out of common usage and now, outside of the idiom “just desert”, is almost never used, leading to many people mistakenly thinking it’s “just desserts” instead of the correct “just deserts”.