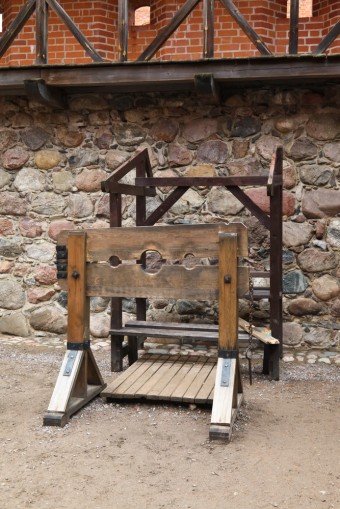 For a few centuries ending in the late 1800s, stocks were common in town centers in the United States and Europe. The device, used as a way to humiliate those who violated cultural norms or laws, was typically reserved for relatively minor infractions otherwise punishable by a fine. The offenders’ arms were placed between the two slabs of wood, which in turn were locked. Their legs were often shackled at the ankles, and in some cases, the stocks themselves had a third hole for the offender’s neck. Regardless, the stocks immobilized the offender, allowing townsfolk to hurl garbage (and worse) at them and generally shame those subjected to such punishment.

Stocks, while common in colonial America, were not the end goal, though — they were simply a means to the end desire of being able to subject a ne’er-do-well to public ridicule. In early colonial Boston, for example, the city’s magistrates used something called bilboes – iron ankle restraints which, like stocks, prevented the shamed person from moving much. But in Boston’s case, the bilboes became unusable, according to History.org, so the town went to replace them. Iron was expensive, so Boston hired a carpenter named Edward Palmer to fashion a set of wooden stocks. He delivered, as promised, charging the town one pound, 13 shilling, and seven pence.

But that price? Exorbitant by the standards of the day. The pound-shilling-pence system was not base-ten; rather, there were 12 pence in a shilling and 20 shillings in a pound. Palmer’s stocks, therefore, cost the equivalent of 403 pence. But according to a North Carolina authority on the value of money during colonial times, a wood bed frame would run about eight shillings, or about 96 pence. Palmer’s stocks were overpriced. And that wasn’t looked kindly upon by Boston’s magistrates.

So what did the magistrates do? They gave Palmer the honor — or, dishonor — of being his creation’s first user. The high price of the stocks was deemed to be extortion. Boston fined Palmer five pounds, much more than he had billed them for, and sentenced him to an hour in the stocks he had just created.

Bonus Fact: The British transition from the pounds-shilling-pence system to the current base-ten system occurred on February 15, 1971, now known as Decimal Day. Both the United Kingdom and Ireland switched on that day. In the UK, television stations aired an advertisement, seen here, explaining the new system and the three new coins to the population at large.