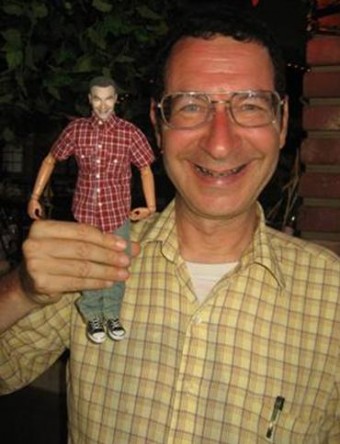 O.K., I know you might be asking yourself, “Who the devil is Eddie Deezen?”  And if you do happen to know who I am, the question might be, “Who cares?” 😉  Look, I know I usually write these “10 things you may not know about” articles on Frank Sinatra or Elvis or Abraham Lincoln or some such august cultural icon.  Well, I’ll fill you in, I am an actor who has done several movies, mostly bad, but a few good ones, including “Grease”, “The Polar Express“, “Wargames“, “1941”, and “I Wanna Hold Your Hand”.  Today besides writing “interesting fact” style articles in my free time, I also still do a lot of voice acting work among other things.  Many often think I was in the “Revenge of the Nerds” film series, but in fact I was not.

So why am I writing this?  Well, I am doing it as a favor and in response to a request from the editor here on Today I Found Out, Daven, who is a very nice guy.  So, that said, here are 10 interesting facts you may not have known about Eddie Deezen, i.e. Me:

1) I once threw up in Steven Spielberg’s toilet.  During the filming of “1941” in 1979, I spent the whole movie up on a Ferris wheel with my partner, Murray Hamilton, and my dummy. (I played a ventriloquist in the film.)  One day, Steven, the film’s director, was whipping us around very fast and for a long time.  As a result, I got very motion sick.  I was taken by Steven’s assistant into his dressing room.  There I lay, on Steven Spielberg’s bed, until I got sicker and more nauseous and then finally I went into the bathroom and threw up in Spielberg’s toilet.  (A definite career highlight.)

2) I got to have lunch with Steven Spielberg, John Belushi and Dan Aykroyd.  One day while shooting “1941”, Steven said to me, “Eddie, do you want to join us for lunch?”  The “us” was him, Belushi and Aykroyd.  I was a naive, innocent 22-year-old kid, and as scared as I was, of course, I said yes.  We dined at the studio commissary.  I sat, trying not to let my jaw hang open, sitting there like a stuffed idiot and listened to the happy banter of these three brilliant artists.  I had no money in my pockets;  as our meal ended, I was nervous about that, but luckily, Steven picked up our tab.  Coolest lunch of my life.

3) I once played Harpo Marx’s harp.  I went to a one-man show on one of my idols, Harpo Marx, in L.A. many years ago.  My pal, Les, starred as Harpo.  After the show, I went to see Les in his dressing room.  He had in his room a real harp once owned by Harpo Marx himself.  Les let me strum and “play” on it for a few minutes.

4) I touched Paul McCartney, but not in a weird way. 😉  I saw one of my greatest heroes, Paul McCartney, on “The Tonight Show” in October of 1984.  After the show, Paul was driving away in his car and a crowd of us Beatle fans ran up to his car as he was pulling out.  Paul opened his window and I reached in and I got to touch him.  Paul proceeded to leave and as he left, he drove his car over the tip of my shoe…

5) I made out with Tonya Harding.  I did a signing show at Chiller Theatre in New Jersey in 2005.  Tonya Harding was there at the show, signing too.  Tonya didn’t get a lot of customers; I think people thought of her as a “villain” at the time. I saw she was a bit lonesome and I went over and talked to her and we became great pals.  We actually started making out together at the show. (She was not only very attractive, but she was a great kisser too!)  I liked Tonya very much and I hope she is doing well now, wherever she is.

6) I played Santa Claus at Christmas and saw George Harrison.  On December 22, 1987, I got asked to play Santa Claus at the Beverly Center in L.A.  Of course, I happily said yes.  I talked to hundreds of kids as Santa (many were scared of me, but I tried to be friendly.)  During my break, I took off my thick Santa padding, and I was hanging around and I saw George Harrison leaving a book store at the Beverly Center.  Like a real idiot (and completely star struck fan), I followed George all the way down the level; he had a bodyguard on each side of him. (At least these two guys looked like bodyguards.)  No one else, to my surprise, noticed George, just me.  I followed him all the way down the aisle, parallel to him, until he and the two guys disappeared.  This wonderful night was the happiest Christmas of my life. 😉

7) I went to the first-ever night World Series game.  When I was 14, my dad took me to the first night game in World Series history in Pittsburgh at Three Rivers Stadium.  This was October 17, 1971.  The Pirates, my team, happily won. (Beating the Baltimore Orioles.)

9) I sang on the “Grease” soundtrack.  “Grease” was my first movie. We filmed it in the summer of 1977.  I actually sang on one song, “We Go Together”, which was in the movie and on the “Grease” album.  But I signed away my rights to any residuals, so I didn’t make any money from it.

10) I shook hands with Jack Nicholson on the “Grease” set.  When we were filming “Grease”, we blasted the music really loud on our soundstage.  Jack Nicholson was filming on an adjacent stage and he would yell out to us to “shut up” and “turn that %&$%#** Music down!”  Finally, one day, Jack came over and visited us on our stage.  I ran up to him and shook his hand.  He was a real nice guy and he seemed to have a great sense of humor.