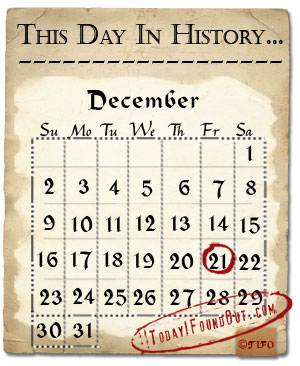 On this day in history, 1898, Marie and Pierre Curie discovered the radioactive element radium (in the form of radium chloride), extracting it from uraninite. They first removed the uranium from the uraninite sample and then found that the remaining matter was still radioactive, so investigated further. Along with the barium in the remaining substance, they also detected spectral lines that were crimson carmine, which no one had yet documented or, apparently, observed. These spectral lines were being given off by radium chloride, which they managed to separate from the barium. Five days later, they presented their findings to the French Academy of Sciences.

Five years after that, they together won a Nobel Prize in physics for their discovery, making Marie Curie the first woman to win a Nobel Prize. She went on to win a second Nobel Prize in 1911; this time in chemistry, for successfully managing to isolate radium through electrolysis of radium chloride. She did so with the help of André-Louis Debierne. Specifically, they distilled a solution of radium chloride using a mercury cathode cell with a hydrogen gas atmosphere. This second Nobel Prize made her the first person to ever win two Nobel Prizes (to date, there have been three others besides herself who have also accomplished this).

Interestingly, Curie’s notes from the 1890s are still considered too dangerous to handle without protection, due to the high levels of radioactivity. They are even stored in lead-lined boxes. Neither she nor her husband, of course, knew anything about that and handled radioactive items all the time in their research. She eventually paid the price for this, dying from aplastic anemia in 1934, resulting from long-term ionizing radiation exposure. Her husband was killed after being run over by a horse drawn carriage just a few years after Marie and Pierre had won their Nobel Prize together. Pierre Curie had been walking across the street during a very heavy downpour when he was hit by the carriage, resulting in his skull being fractured under the carriage’s wheel.

The other three people to have won a Nobel Prize twice were: John Bardeen (1956 and 1972, for invention of the transistor (physics) and for coming up with the theory of superconductivity(physics)); Linus Pauling (1954 and 1962, for research into the chemical bond in terms of complex substances (chemistry) and for anti-nuclear activism (peace)); and Frederick Sanger (1958 and 1980, for discovering the structure of the insulin molecule (chemistry) and inventing a method to determine base sequences in DNA (chemistry)).

A couple of Marie Curies’ children have also been involved in the winning of a Nobel Prize. Her daughter, Irène Joliot-Curie, won a Nobel Prize in Chemistry in 1935 with her husband. She also had another daughter who was the director of UNICEF when it won the Nobel Peace Prize in 1965.