This Day In History: November 6 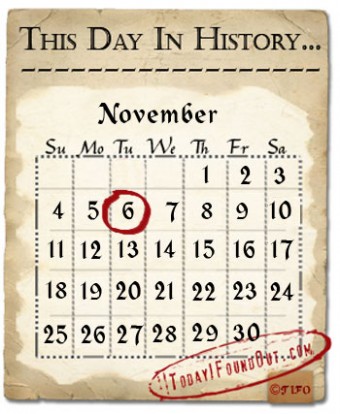 On this day in history, November 6th…

1572 : Wolfgang Schüler observed a Supernova (i.e, a burst of radiation that often briefly outshines an entire galaxy, caused by a star exploding) in the constellation ‘Cassiopeia’. Although it’s hard to say if the astronomer Schüler was actually the first to observe this phenomenon, dubbed one of the most important events in astronomy, he published Stella Nova (Latin: “New Star”) which gained him some measure of fame. A few days later, on November 11th, Tycho Brahe’s observed the phenomenon.  His observations of the supernova, along with his analysis of others observers, resulted in the supernova being called “Tycho’s Nova”. The light emitted by the star, that was estimated to have first reached Earth sometime between November 2nd and 6th, was so bright that it could be seen in broad daylight for about 2 weeks and remained faintly visible to the naked eye till March 1574 (about sixteen months).

1905 : Peter Pan made his Broadway debut at the Empire Theater in New York. Written by James Matthew Barrie, ‘Peter Pan’ or ‘ the boy who wouldn’t grow up‘ was the central character in the famous stories by the Scottish novelist. The fictional character first appeared in print, in Barrie’s 1902 novel titled ‘The Little White Bird‘. The story revolved around a boy from the fantastical isle of NeverLand, who never grew up and the effect he had on  three children from a “proper” British family. In 1904, ‘Peter Pan’ was made into a play, appearing for the first time on the London stage. From there producer Charles Frohman brought the production to the United States, launching it on Broadway with actress Maude Adams playing the lead role of ‘Peter Pan’.

1913 : Gandhi was arrested in South Africa for leading a protest of Indian miners. Commonly known as Mahatma Gandhi, Mohandas Karamchand Gandhi is best known for his non-violent approach to fighting for civil rights and freedom across the world, especially in India. In 1893 when he first went to South Africa, he noticed the discrimination against people of color. In a matter of a few years, he took up political leadership to fight for the rights of Indians in the country and even founded a newspaper called  “The Indian Opinion”, to spread his philosophies on passive resistance. In 1913, the government passed a bill (Indian Relief Bill), imposing a tax on all former indentured laborers. To protest this, Gandhi initiated a march on the 6th of November, and was supported by thousands of Indian mine workers and their families. He was immediately arrested, but was released on bail, only to re-join the march. He was subsequently re-arrested and detained. Ultimately the government scrapped the Indian Relief Bill.

1984 : President Ronald Reagan was re-elected as President of the United States with the highest total electoral votes by a presidential candidate, an astounding 525 out of 538. The Republican and former actor, who has appeared in over 50 Hollywood movies, first entered politics in 1966 when he was elected Governor of California. In 1980, Ronald Reagan won the Republican Presidential nomination and went on to become the 40th President in 1981 beating, out President Jimmy Carter with 489 electoral votes to 49.  In 1984, he won a second term as President, competing against former Vice President and Democratic candidate, Walter Mondale. It was one of the biggest presidential victories in the U.S. history. He won 49 of the 50 states.

1999 : Australians voted against changing their constitution to a Republic, keeping the British monarch as the head of state in Australia. On this day, the Australian Republic Referendum was held for 2 main reasons. Firstly, to change the Constitution of Australia adopted in 1901 from a constitutional monarchy to a republic with a President appointed by Parliament. Supporters argued that Australia is an independent country and that it was rather pointless that the British monarch, residing in another country altogether, be their Head of State. The monarchist supporters argued that the Governor-General of Australia was as good as the Head of State and that there was no need to change the existing system. The second item put to vote was simply a proposed law to alter the Constitution to insert a preamble recognizing Australia’s indigenous people in the nation’s founding document. Both propositions failed with 55 percent of Australians voting against the republic, compared to 45 percent in favor of it and 60 percent voting no to the preamble.  The leader of the  monarchist campaign, Kerry Jones, made headlines after the victory stating: “The Australian people have had their say, and they said ‘No’ to dumping the queen.”