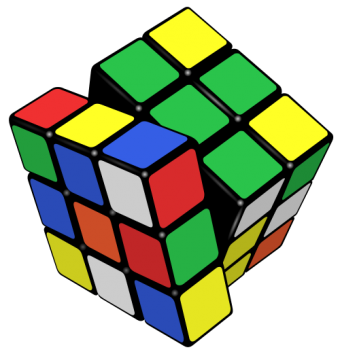 Anyone who is serious about solving a Rubik’s Cube uses some sort of algorithm, or sequence of steps to help them solve the puzzle. There are many different algorithms, varying in complexity and number of moves required, but those that can be memorized and used by a human typically require more than forty moves.  It turns out though, this number is a bit high, in terms of actually using the most efficient solution for a given position on a standard Rubik’s Cube. This was proved in July of 2010 by Tomas Rokicki, Herbert Kociemba, Morley Davidson, and John Dethridge who used 35 “CPU years”* worth of computing time, donated by Google, to prove that one only needs a maximum of 20 moves to solve any position on a standard Rubik’s Cube.

Interestingly, the researchers did not solve every position by its optimal solution.  Rather, once they discovered one position that definitely needed 20 moves to solve in the most efficient manner, they then did not try to solve the other positions for their optimal solution.  They only required that it be solved in 20 moves or less, to make sure it was below the now known upper bound.  As long as all the other positions could be solved in under this amount, they knew this number had to be the upper bound on moves needed to solve any position on the standard Rubik’s Cube.  The benefit to doing it this way was that it drastically decreased the number of calculations required to prove that no position on the standard Rubik’s Cube needed more than 20 moves to solve.

*note:  One “CPU Year” is typically referred to as the work potential able to be done by one Giga-FLOP machine in one year.  For those who aren’t familiar, a “FLOP” just means “Floating Point Operations Per Second”. Thus, a one FLOP machine can do one operation per second.  A one Giga-FLOP machine, usually abbreviated as a GFLOP, can do one billion operations per second.  So to prove the above, the researchers used 35 CPU Years or around 1,103,760,000,000,000,000 operations, which, you’ll note, is less than the number of possible Rubik’s Cube positions.  For more on how exactly they managed to reduce the problem so drastically to be able to do it in so “few” operations, click here.