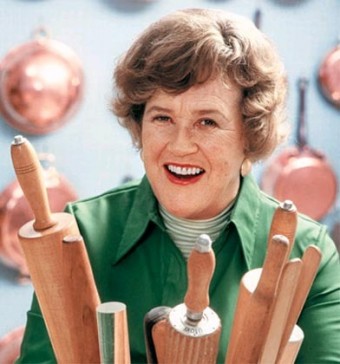 Today I found out, before becoming one of the world’s most famous TV chefs, Julia Child was a top secret research assistant for the Office of Strategic Services, the predecessor of the CIA.

After graduating from college with a degree in English, Julia Child, then named Julia McWilliams, worked in the advertising department for W. & J. Sloane in New York City as a clerk.  She later moved to California and continued to work in advertising in more or less the same position.  When the U.S. entered WWII, Child tried to volunteer for the Navy’s Women Accepted for Volunteer Emergency Service (WAVES), but was rejected due to her height (6 feet 2 inches, which was 2 inches above the maximum for WAVES). This turned out to be a good thing as, had she been accepted to WAVES, she never would have met her husband who got her interested in cooking and was her first teacher in the culinary arts.  Rather, she eventually found her way to the Office of Strategic Services (OSS) under General William J. Donovan.

She began there as a low level clerk and, within a year, had risen to senior clerk before volunteering with the Emergency Rescue Equipment department of the OSS as a research assistant, where she worked on such projects as research into whether soldiers lost at sea could survive on drinking liquids from a fish’s body, which Child referred to as “the fish-squeezing unit”.  On a similar vein, the navy was having trouble with sharks eating soldiers from downed ships before rescue operations could be carried out.  Child was then on a team assigned to come up with a shark repellant, which they did.

After finding out they were recruiting people in the OSS to travel to India and China, Child volunteered and was selected to go in 1944.  While in the Far East, she became the head of the Registry of the OSS Secretariat and was granted high security clearance with her primary job being to organize, relay, and track various sensitive documents and information funneled to and from the O.S.S.  As Air Force Intelligence officer, Byron Martin, stated about Child: “She was privy to every top secret … a person of unquestioned loyalty, of rock-solid integrity, of unblemished lifestyle, and of keen intelligence.”  According to her husband, Paul: “Julia was privy to all messages, both incoming from the field, or Washington, etcetera, and outgoing to our agents and operatives all over China-Burma-India.”

Near the end of the war, Child was targeted to actually become a spy herself, as she had a particularly adventurous spirit and had proven herself exceptionally trustworthy.  But before she could be used as such, the war ended abruptly, shortly after the dropping of the nuclear bombs on Hiroshima and Nagasaki.

Interestingly, before getting married, Child was a very poor cook, having lived most of her life with a cook at her home.  As she described it, back then, you didn’t need a lot of money to afford a maid and a cook as you could just hire an immigrant for a small amount of pay and room and board.  So most middle class and above households had their own maid and cook.  It wasn’t until she and her husband Paul, a noted connoisseur of fine foods and also a member of the O.S.S., where the two met, moved to Paris after WWII that she became interested in cooking and began attempting to learn.  According to Child, many of her early attempts ended disastrously.  Despite her early failures, her husband, an accomplished cook himself at the time, began teaching her to cook and to appreciate fine French cuisine.  She eventually enrolled in the famed Cordon Bleu cooking school where her skills started to blossom and she began to master the trade that would eventually make her famous.