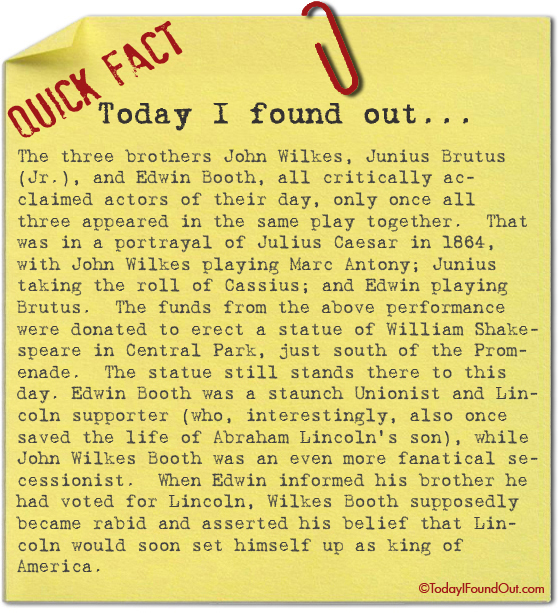 The three brothers John Wilkes, Junius Brutus (Jr.), and Edwin Booth, all critically acclaimed actors of their day, only once all three appeared in the same play together.  That was in a portrayal of Julius Caesar in 1864, with John Wilkes playing Marc Antony; Junius taking the roll of Cassius; and Edwin playing Brutus.  The funds from the above performance were donated to erect a statue of William Shakespeare in Central Park, just south of the Promenade.  The statue still stands there to this day. Edwin Booth was a staunch Unionist and Lincoln supporter (who, interestingly, also once saved the life of Abraham Lincoln’s son), while John Wilkes Booth was an even more fanatical secessionist.  When Edwin informed his brother he had voted for Lincoln, Wilkes Booth supposedly became rabid and asserted his belief that Lincoln would soon set himself up as king of America.