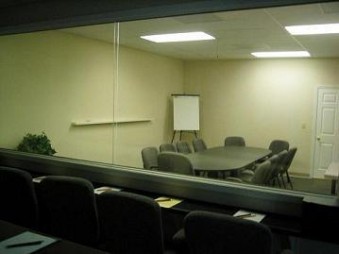 Today I found out how one-way mirrors work (also known as “two-sided” mirrors).

Interestingly, there is no such thing as a true one way mirror.  This would actually violate the laws of physics (for more on that see the Bonus Factoids below).  What’s actually going on here with one-way mirrors is that we have a piece of glass with an extremely thin coating of some reflective material like silver (as is often used on normal mirrors).  Unlike normal mirrors though, the silver layer is so thin that it only actually reflects about half the light back.  The other half passes through the glass.  This layer is actually so thin, that if you were to look at it at a molecular level, you’d see that only about half the glass was actually coated with the silver; the silver would appear to be speckled on the glass more or less evenly.

The problem with allowing half the light through though is that you would normally still be able to see either way through the glass; it would just appear tinted.  Not only that,  the half of the light being reflected is being reflected back on both sides.  So either side could be the reflective side or the “see through” side.  The variable here is only the light levels in the two rooms which determines which side seems see-through and which side seems reflective.

If the lighting in both rooms is close to equal, the strong mirroring effect won’t happen because the light being passed from one side to the other is roughly equal.  It will then just be very similar to a normal window, though with the windows seeming slightly tinted.  However, if you turn off the lights on the one side and make the lights on the other side very bright, then the mirroring effect will kick in quite strongly, effectively stopping someone from seeing what’s on the other side of the window.  What you’ve done here is create an imbalance of light traveling between the rooms.

If it seems confusing why creating this imbalance should make a difference, think about if you had the volume of your radio turned up really loud in one room and another radio set really softly in an adjacent room.  The person in the loud room would not be able to hear the quite radio in the adjacent room as it is drowned out by the loud radio.  If your volumes are set at roughly equal decibel levels, then you’ll both be able to hear each others radios.

You can see a similar effect even with a normal window in your house that contains no reflective coating.  When it is dark outside and bright in the room you are in, the window ends up showing a strong reflection on the light side while people on the dark side can see inside just fine.  The same type of thing is happening with one-way mirrors, except they’ve added a thin reflective coating in order to make the effect even stronger.

Of course, an easy way to get around this problem is to simply approach the window and block out the light on the bright side with your hands.  You’ll then be able to see through the window or one-way mirror just fine.