The Japanese Earthquake On March 11th, 2011 Moved the Earth On Its Axis 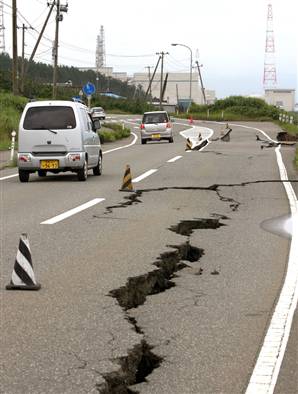 Today I found out that the earthquake in Japan on March, 11, moved the Earth on its axis by about 4 to 6 inches, which resulted in shortening of a day by around 1.8 microseconds.

Massive earthquakes typically affect the Earth’s rotation with the impact of every individual earthquake depending on its magnitude, location, and the details of how the fault slipped.  The 8.9/9.0 magnitude earthquake which hit the Pacific Ocean near Northeastern Japan at around 2:46 pm on March, 11 caused extreme damage and unleashed a devastating tsunami a day after, when waves crashed 10 kilometers inland.

This was the largest earthquake ever recorded in Japan and the subsequent tsunami traveled across the Pacific Ocean, reaching as far as the western coasts of Canada, the U.S. and Chile.  In addition to this, during the first 24 hours, the initial earthquake triggered more than 160 aftershocks.

Reports from the National Institute of Geophysics and Volcanology in Italy estimated that this recent earthquake shifted the planet on its axis by nearly 4 inches (10 centimeters). Other scientists put that figure at closer to 6.5 inches (17 centimeters).

When the axis on which the planet’s mass is balanced slightly shifts, it causes changes in the length of time for the Earth to make a complete rotation. The Japanese earthquake changed the distribution of Earth’s mass shifting it towards the center. This resulted in the planet spinning a tiny bit faster, shortening the length of the day by about 1.8 microseconds (a microsecond is one millionth of a second). For reference, one Earth day is approximately 86,400 seconds long.

Experts say that this earthquake was caused when the Earth’s crust shifted along an area about 250 miles long by 100 miles wide. The Pacific tectonic plate dove under the North American plate deep underwater, with the plates slipping more than 18 meters overall.