It’s Possible to Briefly Remain Conscious After Being Beheaded

December 16, 2010 Jon
Note: This is a guest article contributed by frequent TIFO visitor and owner of DumpADay, Jon. 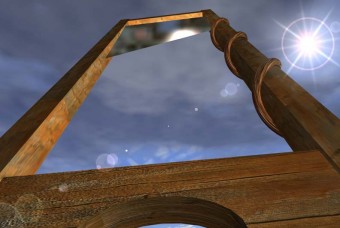 Today I found out that it is possible for a person to briefly remain conscious after being beheaded.

When I first started to research this topic, I found it hard to believe.  However, after sifting through numerous reputable sources saying that the beheaded person can continue to remain conscious anywhere from 2 to 15 seconds after being beheaded, I started to think that maybe it was true.  So, I was all set to write this article when I came across another article concerning hangings, which stated that if the neck is snapped, then death is instant.

This had me curious, how does a person remain conscious after he loses his head and having his neck severed, yet is killed “instantly” when having his neck just snapped from being hung?  After several hours of research online, it was clear I would need expert medical advice.  So I emailed a close friend, who happens to be a brain surgeon.  (I always knew staying friends with him would payoff someday, despite his personality… just kidding Scott)  This is was his reply:

“…Well it is true that the brain keeps going after being beheaded, it’s really just about blood  flow and oxygen, and obviously beheading by guillotine is instantaneous and so the brain and thus possibly consciousness still keeps going until the brain stops receiving oxygenated blood, kind of like being suffocated. The good news about this though, for those going through it, is it’s a painless suffocation (though their neck my hurt a bit) ;-), since the pain that comes from holding your breath or being suffocated comes from the buildup of Co2 in the body, slowly turning the blood more acidic than normal (called respiratory acidosis).  This cannot happen in beheading because no acidic blood is returning/circulating through the brain and the time-span to unconsciousness would be too quick to experience this in any event.  So instead of pain, you would just slowly start seeing “stars”, as it were, and then bam! You’re unconsciousness, then dead!
As far as the hanging thing, it’s still the same; what they are saying when they talk about your neck breaking is if you snap C1-C2 vertebrae, that in turn severs the spinal cord at those vertebrae and severs life sustaining functions, including breathing and heart rate, which are controlled by nerves that branch off at that level.
Now if the trauma from dropping pulls on the brain stem hard enough, then you could lose consciousness immediately, similar to hitting your head really hard with something, but as far as the brain itself goes, the cells still only die with a lack of oxygen that happens over the course of several seconds.  However, you would be unconscious while this was taking place unless you did not have your brain stem jarred hard enough, then yes, you would be conscious while you suffocated by hanging. All these things are not theory they are physiologic fact.”

How long one can  remain conscious in either case is then entirely based on oxygen supply.  Harold Hillman, a British scientist and expert in the neurobiology of various execution methods, states that he doesn’t think consciousness could last more than about two to three seconds after beheading and in some cases the jarring of the guillotine should be sufficient to induce unconsciousness.  So while their brain would technically still be alive, they wouldn’t be conscious in that case, much as Scott pointed out above as can happen during hangings.  Many other experts theorize that a person could remain conscious for up to 15 seconds, assuming the head landed correctly so that the blood didn’t just all instantly drain out.

On that happy note, I’ll leave you with a letter sent to the Straight Dope from a U.S. Army veteran who had been stationed in Korea, in June 1989.  He and his friend were in the back seat of a taxi when the taxi collided with a truck; the veteran was pinned in the wreckage, but his friend had been decapitated.  Here is his letter:

“My friend’s head came to rest face up, and (from my angle) upside-down. As I watched, his mouth opened and closed no less than two times. The facial expressions he displayed were first of shock or confusion, followed by terror or grief.  I cannot exaggerate and say that he was looking all around, but he did display ocular movement in that his eyes moved from me, to his body, and back to me. He had direct eye contact with me when his eyes took on a hazy, absent expression… and he was dead.”