How to Survive Being Trapped in Quicksand 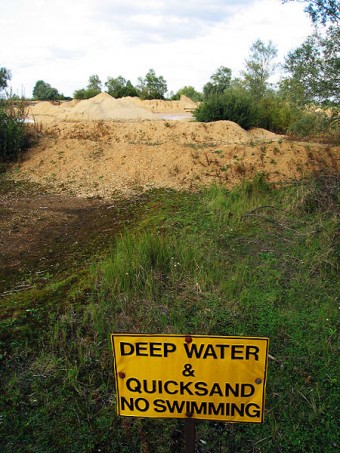 Today I found out how to survive being trapped in quicksand.

First, don’t panic! Panicking in quicksand is pretty much one of the few ways to turn this slightly dangerous situation into deadly.  Second, if you are wearing something heavy attached to yourself like a backpack, unstrap it immediately if you feel it pushing you down.  Outside of having something attached to yourself that is heavy relative to its volume vs. the mass of the quicksand per unit volume, it turns out that it is impossible to sink in quicksand.  If you were simply to stand completely still, the lowest you are likely to sink is to around your waste. Thrashing around however, has been shown to cause the sediment and water to separate somewhat. This will cause you to sink deeper and deeper the more you thrash, to the point where you’re almost completely submersed; then your thrashing, due to some suctioning effects, can pull you under.

Most people who die in quicksand do so for only two reasons: number one, they panic and thrash about causing them to sink;  number 2, they are afraid to move at all and so sit there waiting for help that never comes. This isn’t necessarily a horrible strategy, if you know people will be along, but consider that it won’t need to be very cold out at all for you to get hypothermia in this situation, among other drawbacks to being exposed to the elements.  Plus, saving yourself from quicksand makes a much better story later;  it also turns out that it’s not too terribly difficult, contrary to what Hollywood would have you believe.

Assuming you can’t reach any part of dry land to help aid you in pulling yourself out, all you need to do to get out then is to slowly lean back putting more of your upper body in the quicksand, which may seem scary, but don’t worry, you’ll float significantly better in quicksand than water, so you won’t sink as long as you don’t make sudden movements.  If it makes you feel better take in deep breaths similar to when you back float in water.  Because the quicksand is so much more dense than water by itself, you’ll float well even without this, but it certainly doesn’t hurt.

As you lean back, gently try to bring your legs upwards. Be patient and do everything as if you are doing it in slow motion. You’ve got all the time in the world here unless you act like you don’t and move quickly; then your time on this earth might be ending sooner rather than later.

Once you are on your back, your buoyancy and persistence should allow you to get your legs and mid-section up floating on the surface. Now, ever so gently use your hands to very slowly paddle your way towards the edge using very short slow strokes. Again, everything should be done as if it is in slow-motion. Don’t submerse your hands all the way here.  Also, try to keep part of your arms above the muck so you aren’t paddling with your entire arm. Paddling with your whole arm at too fast a speed will tend to make the sediment and water separate a bit around your body, which will decrease your buoyancy, which is bad.  As long as you work in slow motion with small strokes, you should be fine either way, but good to be extra cautious.

Once again, you should generally be in no hurry here, unless you are stuck in quicksand in a tidal location where water might come up and potentially drown you. But even in this situation, if most of you is floating on the surface, including your legs, enough water coming up, might actually help you.

Depending on how far in you got yourself into the quicksand, it may take several hours to paddle yourself out.  That’s ok in most circumstances.  Feel free to take breaks if you get tired and enjoy the view of the sky and contemplate the kick-butt anecdote you’ll have out of this to tell at cocktail parties.

Now that you’ve got a firm grip on solid land, you may find it difficult to pull yourself out if your legs and feet are still submersed, due to possible suctioning effect.  One thing that can help in this situation is to use a stick to try and get your shoes/boots off.  Shoes with flat, flexible soles will often cause some pretty powerful suctioning effects in quicksand, depending on what exactly the quicksand is made up of.

For obvious reasons, it’s probably not a good idea to try and get your shoes off with your hand.  So if you don’t have a stick handy, another method that works fairly well here, assuming you have a firm grasp on something on dry land, is to move the submersed parts of your body in small circles.  This will help separate the sediment and water around your submersed section and thus pool some water around those bits, allowing you to pull yourself out a few inches at a time.