Duct Tape was Originally Named “Duck” Tape and Came in Green, Not Silver 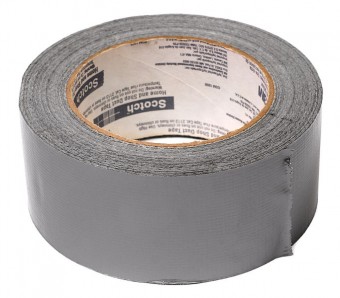 Today I found out Duct tape was originally named “Duck” tape and originally only came in green, not silver.

Duct tape was originally invented by Johnson & Johnson’s Permacel division during WWII for the military.  The military specifically needed a waterproof tape that could be used to keep moisture out of ammunition cases.  This is why the originally Duct tape came only in army green.

Soldiers began noticing it wasn’t just good for waterproofing ammunition casings, but also worked great for repairing things.  They began using it for repairing jeeps, guns, and aircraft.  Due to its waterproof nature, strength, and built in adhesive, they even began using it as a temporary means to close up wounds in emergencies; this is fitting because the closest predecessor of duct tape was also a Johnson & Johnson product used as medical tape.

So how did “Duck” tape eventually come to be known as “Duct” tape and be sold primarily silver in color instead of army green?  When the soldiers of WWII came home, they brought “Duck” tape with them.   Shortly after their return, the housing market was booming.  Some manufacture then got the bright idea to start selling it as a means to connect heating and air conditioning ducts; this idea caught on among home manufacturers and they started using it in many of the new homes being built.  To allow for this usage, the tapes primary color was switched from green to silver, so that it would match the ducts.  Soon the tape began being referred to as “Duct” tape instead of “Duck” tape.

Ironically, researchers at the Lawrence Berkeley National Laboratory, Environmental Energy Division concluded that you should never use Duct tape to seal ducts.  Their tests showed that under typical duct conditions, duct tape becomes brittle and will fail quickly.  Duct tape also can catch on fire or just smolder and produce toxic smoke.  Because of this, it’s usage on ducts has been prohibited by the state of California as well as in building codes in most of the U.S.

Words of Wisdom:  “One only needs two tools in life: WD-40 to make things go, and duct tape to make them stop.”  –G. Weilacher