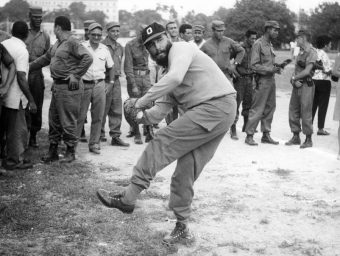 There’s a long history of rulers bragging about their athletic talents. Ancient Egyptian kings sometimes used sporting prowess to show off masculinity and inspire fear. The Roman Emperor Commodus liked to step into the gladiator ring, often asking for already wounded or weakened opponents so he could look superior. (Yes, he was the partial inspiration for the movie Gladiator. Also like in the movie, his sister attempted to have him overthrown after he went off his rocker a bit.) In the 16th century, King Henry VIII jousted to show off to a woman; it also nearly killed him. Even in modern times, Kim Jong-il (real name Yuri Irsenovich Kim) insisted that he had 11 hole-in-ones in a single round of golf and Vladimir Putin intimidates with a judo black belt  (not to mention the whole-shirtless-on-horseback thing).

Cuba’s Fidel Castro was no different. For years, there’s been a legend that this long time ruler (who up until his death was still consulted on major decisions) had such a blazing fastball and wicked curve that Major League teams were all drooling over him. The reason he never accepted lucrative offers from these teams, at least according to the legends, was because he believed he had better things to do – you know, like start a revolution. So, was there any truth to these claims? Was Castro actually a Cuban Koufax?

Born 1926, Fidel Castro was a son of a wealthy Spanish sugarcane farmer who came to the country during Cuba’s War of Independence. His mother was a domestic worker on his father’s farm. Castro grew up at a time when professional baseball leagues were starting to get a foothold in Cuba. Similarities existed with American leagues, but unlike the US, Cuban professional leagues were not divided by race (at least after 1900). Black, Latin and white players all took the field together. The Negro Leagues sometimes recruited players from the Cuban Leagues, like Baseball Hall of Famers Cristóbal Torriente and Rube Foster. In turn, many Negro League players – legends like Josh Gibson, Satchel Paige and Cool Papa Bell – regularly went to Cuba for winter ball. In fact, in the 1930s the star talent was so great in the Cuban Leagues that some baseball historians believe that it rivaled the level of play in Major League Baseball.

As for Castro, he was indeed a pitcher in high school, but he was more of a stand out in other sports, such as basketball, running, and ping-pong. In fact, there’s documented evidence that he was recognized as one of the best school-aged athletes in Havana during his junior year. As for baseball, he was good enough to survive pitching at the high school level, but not beyond. 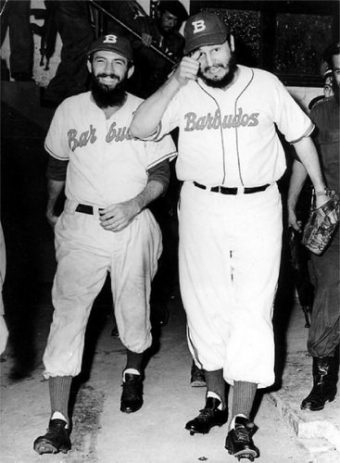 Nevertheless, there are several tales, widely reported as fact, that have been used as evidence that Castro was actually an elite pitcher. The first yarn involves legendary Washington Senator’s Cuban scout Joe Cambria, who was supposedly so impressed with Castro’s curveball that he insisted on signing him on the spot. Castro purportedly said no thank you, opting to go to law school instead.

A 1989 Harper’s Magazine article also noted that the New York Giants saw great potential in the future dictator while he was at the University of Havana. In their article, a scout recalled that Castro was a “big kid who threw a wicked bleeping curveball… nothing amateur about his pitches” and was a “good prospect because he could throw and think at the same time.” After taking a few days to consider, the Giants extended Castro an offer with a supposed signing bonus of  $5,000 or about $65,000 today (an unheard of bonus for a Cuban player of the day); it was reported that Castro stunned Giants officials by rejecting the deal.

Unfortunately for those who like a good “What if?” story, documented evidence simply doesn’t support any of these legends. There is evidence that Castro was watched by Major League Baseball scouts, but that was because of Castro’s own persistence. He had a habit of showing up uninvited to tryouts for a laugh. He would pitch, but scouts paid little attention to him and he doesn’t seem to have seriously considered ever pitching professionally, even if they had been interested.

Years later, the aforementioned scout Cambria, who the legends generally say was enamored with the young Cuban, would actually say he remembered Castro as someone with a “good curve”, but “not much of a fastball” and he was not considered someone the Senators wanted to sign.

As for the story about the Giants, there are a couple of major inaccuracies that should put this story in the myth pile. First, Castro never actually pitched in college, contrary to what many different Castro/baseball legends state. (He did play basketball as a freshman at the University of Havana.) Second, and most importantly, the scouting reports Harper’s Magazine cited were made up.

About the only part of these stories that does make sense is Castro turning down supposed offers to play in the Majors. That would have actually been pretty likely, if he’d had such offers.  You see, this was long before the age when most players were making enough in their careers to set them up for life. While today the average Major League Baseball salary is just under $5 million per year and rising fast, in the mid-1940s even the highest payed player in baseball was only earning about $27,000 per season (about $360,000 today). Baseball was arguably a fun way to make a living, but for the average player, it wasn’t exactly a way to get rich, and for many wasn’t even that good of a living. Further, one only had a short window of opportunity to play and the risk of a career ending injury or some young upstart taking your spot was always looming.

On the other side of things, Castro came from a very wealthy family and had great prospects in politics and law- a career path that was, at this time, far more prestigious and likely to earn him drastically more in the long run, even without eventually leading a revolution. Going with something like baseball in this era would have been a major step-down for him.

In any event, beyond myths about Castro being amazing at pitching and snubbing his nose at the Major Leagues, one rather famed and apocryphal story about Castro’s baseball exploits that continues to make the rounds today, even in many otherwise reputable publications, involves an actual Major League Baseball player claiming he once faced Castro in the batter’s box. The legend first appeared in a June of 1964 issue of Sport Magazine, about a decade and half after the events supposedly took place.

In the article, a journeyman MLB infielder named Don Hoak claims that he was playing in a Cuban Winter League game when a protest broke out and students rushed the field. Leading those students was Castro. He stormed the mound and took the ball from the pitcher, eventually throwing fastballs for Hoak to try to hit, several narrowly missed his head. Finally, with no one doing anything about this baseball saboteur, Hoak yelled for the police and the intruder was taken off the field. While Hoak makes it clear in the article that he didn’t agree with Castro’s politics, there’s certainly aspects of him being impressed with Castro’s natural pitching talent.

Of course, despite that this story has long been considered true with pretty much no one questioning it until relatively recently, it never actually happened. Whether by just having a false memory (we all have a shocking amount of these, though we never like to admit it), mistaken identity, or intentionally making the story up,  we know definitively that Hoak was incorrect here thanks to baseball historian Everardo Santamarina who did a deep dive into the matter. You see, beyond a boatload of other problems Santamarina found with the story, the smoking gun comes in the fact that Hoak played in Cuba during the 1953-1954 winter season. What was Castro up to at this time? He was in jail, having been arrested the summer previous; he wouldn’t be released until May 15, 1955.

Four years later, the Castro-led rebels ousted Fulgencio Batista. During Castro’s reign to consolidate power, he banned professional baseball from the island, believing that it corrupted. Baseball was to be only an amateur game.

Many people think of Castro’s “almost” baseball career as one of history’s great “What ifs?”- akin to “What if the Academy of Fine Arts Vienna had accepted Hitler’s application?” allowing him to continue his original life’s ambition of becoming a professional artist, instead of ultimately joining the army. In this case, “What if Castro played Major League baseball instead of helping to incite revolution and becoming a dictator?” While we will never know, one thing is for sure – Castro was never even close to good enough to play in the Major Leagues and there was never any interest by scouts to see him try.