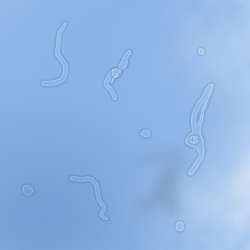 Today I found out what causes “eye floaters”.

For those who’ve never experienced this phenomenon, eye floaters are little oddly shaped objects that appear in your vision, often when one looks at bright light such as a blue sky.  Their shapes vary greatly, but will often appear as spots, cobwebs, or randomly shaped stringy objects.  These are not optical illusions, but rather something your eyes are actually perceiving.  There are a few different things that can cause this, but in most cases these eye floaters are caused by pieces of the gel-like vitreous breaking off from the back portion of your eye and then floating about in your eye ball.

The vitreous humor, or often just “vitreous”, is a clear gel that fills the gap between your retina and lens, helping maintain the round shape of your eye in the process.  This gel is about 99% water and 1% other elements; the latter of which consists mostly of a network of hyaluronic acid and collagen.  Hyaluronic acid ends up retaining water molecules.  Over time though, this network breaks down which results in the hyaluronic acid releasing its trapped water molecules.  When this happens, it forms a watery core in your vitreous body.

As you age then, pieces of the still gel-like collagen/hyaluronic acid network will break off and float around in this watery center.  When light passes through this area, it creates a shadow on your retina.  This shadow is actually what you are seeing when you see the eye floaters.

Children and teenagers almost never experience these types of eye floaters as there must first be some deterioration of the gel-like substance in their eye, creating the watery core, for these floaters to appear.  However, they do still sometimes experience a certain type of eye floater that often appears more like a crystallized web across their vision.  These floaters aren’t found in the vitreous humor like the above floaters.  Instead, they are found in the Premacular Bursa area, right on top of the retina.  These floaters are microscopic in size and only appear as big as they do because of their proximity to the retina.  Unfortunately, their microscopic nature makes them almost impossible to treat in most cases.