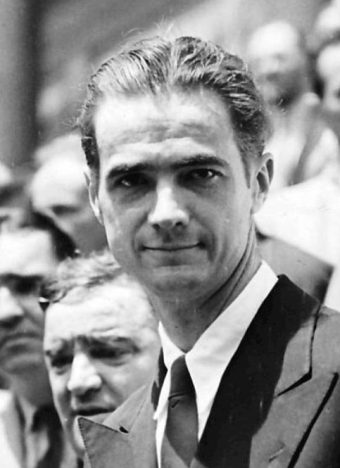 Howard Hughes, the legendarily reclusive billionaire business magnate, is a man about whom much has been written and most people know at least a little bit about. However, as we did when we covered JP Morgan’ giant, purple, knobbly nose that he largely managed to keep hidden from the world, today we’re going to focus on a lesser known aspect of the life of Howard Hughes-specifically the time he bought an entire TV station so that he could watch his favourite movies whenever he wanted.

Known for his eccentricity as much as he is his countless achievements in the fields of business, aviation and entertainment, towards the end of his life Hughes famously moved to Las Vegas and effectively became something of a hermit.

As the story goes, in 1966 under cover of darkness, Hughes rolled into Las Vegas in his private train wearing his favourite pair of pajamas. He immediately had his personal assistants whisk him to the Desert Inn hotel where they had booked out the top two floors for him. This sudden relocation, while seemingly just one of his many eccentric acts, as with so many others in that vein, was later revealed to be a calculated move by the billionaire. In this case, he was looking to avoid a rather large tax bill in California upon receiving a massive sum of $500 million ($3.6 billion today) for his shares of TWA (approximately 1/4 of his net worth at the time).

Hughes could have accomplished the same thing relocating to many places, so why’d he choose Las Vegas? It had great investment potential. According to one of Hughes’ top personal aides, Robert Maheu, Hughes’ intention was to use this massive cash influx to buy every piece of property in Las Vegas he could get his hands on, with the plan being to then fix the city’s reputation (at the time it was a hotbed of organised crime) to attract more people. To quote the man himself concerning his vision of Las Vegas: “I like to think of Las Vegas in terms of a well-dressed man in a dinner jacket and a beautifully jeweled and furred female getting out of an expensive car.” 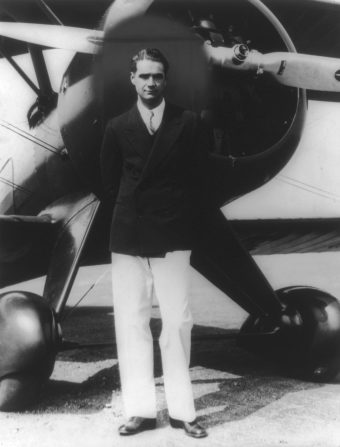 After several weeks of living at the Desert Inn, the general manager of the hotel, Moe Dalitz, asked Hughes in no uncertain terms to leave. While Dalitz was partly annoyed at the fact that Hughes was taking up a significant amount of valuable rooms in the hotel that could have potentially been rented to more lucrative high rollers, another problem was Hughes’ eccentric behaviour. A recluse for most of his later life, Hughes suffered from crippling OCD, germaphobia, chronic pain (and subsequent addiction to painkillers) as a result of multiple serious airplane accidents, and allodynia that made even having his hair or nails cut an excruciatingly painful affair. As such, Hughes refused to let any hotel staff, including cleaners visit his floor or see him. In the rare occasion people did physically meet with Hughes, he could often be found sitting naked (it is speculated that wearing clothing may have been painful for him due to his CRPS/RSD), in total darkness, watching movies, reportedly as a coping mechanism to distract him from the constant pain. As a result, Hughes’ room was reportedly filthy and the billionaire had a rather unusual habit of urinating in mason jars, which he kept sealed in his closet.

When Dalitz told Hughes (through an aide) that he had to leave, Hughes responded that he’d do no such thing. In a move straight out of Hollywood, he simply offered to buy the hotel. Ultimately a price tag of $13 million (about $93 million today) was agreed upon. This solved his housing situation, while simultaneously progressing his plans to buy up as much valuable property in Las Vegas as he could.

Directly following this, Hughes purchased a significant amount of land around the McCarran International Airport and the North Las Vegas Airport, along with a huge amount of residential land in Las Vegas, quickly making himself the largest landowner in all of Nevada.

In the latter case of the Silver Slipper, it is often claimed he bought this simply because the light from the hotel sign, which was right across from his room, was keeping him up at night; after buying it, he supposedly had the sign moved so it didn’t disturb him. However, it should be noted that Hughes kept his very thick curtains closed the entire time he lived at the Desert Inn, eventually even taping them shut. So while it’s possible he may have told his assistants that the sign was bothering him, giving rise to the story, it’s probably more likely the real reason he bought the hotel was the same as why he bought up so much other valuable Las Vegas property- he was set on remaking Las Vegas into a respectable city, all for a very large profit to himself.

This all brings us back to the main subject of this article. Perhaps as a result of Hughes’ other ailments, he suffered from chronic insomnia and would frequently watch television when he couldn’t sleep. The problem was that at the time, no TV station in Las Vegas aired programs 24 hours a day. Not only that, but even when they were on the air, they often had the audacity to not show things that Hughes wanted to watch.

In keeping with his occasional practice of looking for long term investments while also satisfying his whims, Hughes decided to buy channel 8, KLAS-TV, for $3.6 million (about $24 million today) in September of 1967. He then made a few changes to the station, primarily ordering that they now broadcast 24 hours a day and at night show a selection of his favourite movies, without ads.

As noted by a former employee of KLAS-TV in Howard Hughes: The Las Vegas Years: The Women, the Mormons, the Mafia:

My job at the station was to direct the five, six, and eleven o’clock news, but I was also in charge of Hughes’ films… Each day I would write a synopsis of the shows and movies he wanted so see… and send it to him at the penthouse. Sometimes he would change his mind and call the studio or have an aide call the studio to change a movie we had scheduled to run. Indecision from the penthouse seemed to be the only course of action, in those days.

The station in question was able to get around some of the legal issues that can pop up when broadcasting movies they wouldn’t otherwise have the rights to because Howard Hughes also owned one of the “Big Five” Hollywood studios, RKO films, that had a very large catalogue of movies available.

The funny thing about all this was that Hughes didn’t just change the movie schedule before the broadcast, as the KLAS-TV employee referenced above. You see, he would frequently zone out when watching movies, either because he was catching a rare moment of sleep, distracted by something or simply because he got up to do something else. When this happened, Hughes was known to call the station and make them play the scene he missed again, sometimes doing this multiple times.

Other times if he’d get bored with a particular film, he’d ask them to put on a different movie entirely, even in the middle of another film- basically treating the entire station like a very expensive 1960s version of a personal Netflix account.

Of course, Hughes wasn’t the only person who was watching. In a time before home video, such a station showing full movies without ads when no one else was showing anything was a great boon to the populace of the “city that never sleeps”.  Needless to say, irate viewers would regularly call asking what was going on with the broadcast when Hughes would request impromptu changes, only to be told that the owner had decided to show something else and there was nothing they could do about it.

After four years of living in Las Vegas and countless investments in the city, Hughes moved out of the Desert Inn, leaving behind a room that was practically rendered unlivable through years of neglect. Not just moving to another hotel in the city, he left Las Vegas for good, leaving management of his countless properties and businesses there to an aide.

From here, he moved around to a number of other hotels across the world, even briefly cleaning himself up and getting off painkillers before a serious fall in London put him right back on them. He died in 1976 at the age of 70 of kidney failure.

So the next time you find yourself binge watching Netflix or Prime into the wee hours of the morning, be happy in the fact that you’re doing something that just a few decades ago only eccentric billionaires could do. And if at the same time you happen to be wirelessly surfing the electronic compilation of nearly all human knowledge known as the web on your portable super computer bizarrely still called a “phone” (given people comparatively rarely use it for that), maybe stop for a minute and realize the world of 2016, while lacking commercially available flying cars and hoverboards, is still pretty mind-blowingly amazing.