The Origin of the @ Symbol and the First Email Message 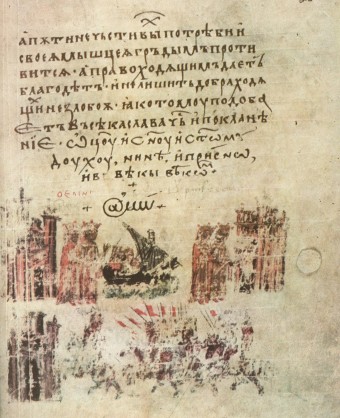 Ubiquitous today, until its use in email addresses, the @ symbol was never really all that popular, with this very fact being one of the reasons it was chosen to be used in electronic message addresses in the first place. So where did the @ symbol come from?

The earliest known example of @ is found in the 1345 Bulgarian translation of the 12th century Manasses Chronicle, which gives a brief synopsis of the history of the world up to the end of the 11th century. In it, @ was used as the symbol for “amin” (amen). No (presently) known surviving instance of @ occurred again for a little over two centuries.

Seemingly independently “invented,” yet another early example, this time of a [email protected] (with just the outside swoosh, but lacking a defined center a), was used on a 1448 Spanish registry, Taula de Ariza, referencing a shipment of wheat from Castile to Aragon.

The earliest example of a full @ used in such a commercial setting was discovered in 2000 in a letter written by a Florentine merchant, Francesco Lapi, on May 4, 1536. In this letter, Lapi used @ to denote a unit of measure – an amphora (clay jar) of wine, which is equivalent to about 1/13th of a barrel. (See: How Large is a Barrel of Oil and Why Do We Measure It That Way?)

According to professor Giorgio Stabile of Sapienza University of Rome, the discoverer of the letter in question, the flourish around the a for amphora was just one of many examples of such embellishment of script found in Florence at the time.

From here, Dr. Stabile theorized it was Italian merchants who popularized the symbol, with it traveling along with traded goods invoices and receipts throughout Europe.

However, whether it really was the Italians who popularized the symbol isn’t clear. For instance, also during the 16th century the @ symbol in Spain had progressed beyond the aforementioned 1448 [email protected] into the fully developed one, being used as the shorthand symbol for the unit of measure called an arroba, then equivalent to about 25 pounds or 11.3 kg. (The arroba is generally thought to have derived from the Arabic الربع pronounced ar-rub, which meant “a quarter.”)

Whatever the case, from here @ evolved to mean in a commercial setting “at the price of”- i.e. 26 bags of flour @ $1 (so a total of $26 for the purchase). The symbol was also occasionally used in other contexts, such as used to signify the French à at least as early as the 17th century.

It should be noted here that before the discovery of the 1345 and 1536 instances, it was generally thought (and many still posit, including the Oxford English Dictionary) that medieval monks were the ones that invented the symbol to use in place of the Latin ad, which meant at, toward, by and about. Lacking in any hard documented evidence pre-dating the preceding instances, the idea behind this theory is that the simple expedient of combining the two letters (essentially an a with the older ∂ form of the letter d) into a single, smaller mark would have saved time and materials during a period in history where every copy of every book had to be written out by hand.

Many other such shorthand symbols were created for just this reason. For instance, the ampersand (&) is shorthand for the Latin “et,” meaning “and.”  Another such classic shorthand was using “X” for “Christ.” The “X” in this case is actually the Greek letter “Chi,” which is short for the Greek

, meaning “Christ”. Scholars began using this particular shorthand about a millennium ago.

In any event, the @ symbol labored in relative obscurity for several hundred years until one fateful day in 1971. In that year, engineer Ray Tomlinson was implementing his own version of a little program called SNDMSG. SNDMSG ran on the TENEX operating system and was, essentially, just one of many flavors of single-computer email- in other words, an electronic mail system only capable of sending messages from one user to another on the same computer.

While this might seem absurdly useless given the way people often use computers today, back then programs like this were incredibly handy.  For instance, the AUTODIN system created in the early 1960s had a facility for sending messages between users and, at its peak, handled nearly 30 million electronic messages per month. MIT’s Compatible Time-Sharing System (CTSS), also created in the 1960s, had a similar system that allowed its numerous users to login from some terminal and, among other things, exchange messages stored on this single machine.

Tomlinson thought it would be interesting to improve SNDMSG such that it could not only be used for sending messages to other users who could login to the same machine, but also be used to send messages from one computer to another via the budding ARPANET. Tomlinson stated he just thought this tweak to SNDMSG “seemed like a neat idea. There was no directive to ‘go forth and invent email’. The ARPANET was a solution looking for a problem. A colleague (Jerry Burchfiel) suggested that I not tell my boss what I had done because email wasn’t in our statement of work. That was really said in jest because we were, after all, investigating ways in which to use the ARPANET.”

While writing the code for this, Tomlinson had to decide how to designate that a message should be sent to another computer on the network, rather than a local account. He fatefully settled on @, a symbol that only made it on the standard keyboard in the first place because of its usage in commerce.

Why did he choose @ over some other symbol? For starters Tomlinson stated, “I looked at the keyboard, and I thought: ‘What can I choose here that won’t be confused with a username?’ If every person had an ‘@’ sign in their name, it wouldn’t work too well. But they didn’t. They did use commas and slashes and brackets.”

That left just a few symbols to choose from that weren’t being commonly used. He noted that, at the time, “The purpose of the at sign (in English) was to indicate a unit price (for example, 10 items @ $1.95).” So,

it made sense. [@] didn’t appear in names so there would be no ambiguity about where the separation between login name and host name occurred… [@] also had no significance in any editors that ran on TENEX. I was later reminded that the Multics time-sharing system used [@] as its line-erase character. This caused a fair amount of grief in that community of users…

The resulting format was [email protected] (and later [email protected] once the DNS system was developed). And so it was that what is generally credited as being the first true network email, at least as we think of it, was sent in late 1971 by Tomlinson.

Of this momentous occasion, Tomlinson said, “The first message was sent between two [DEC-10] machines that were literally side by side. The only physical connection they had (aside from the floor they sat on) was through the ARPANET. I sent a number of test messages to myself from one machine to the other. The test messages were entirely forgettable and I have, therefore, forgotten them. Most likely the first message was QWERTYUIOP or something similar. (Essentially quickly randomly typing gibberish on the keyboard.) When I was satisfied that the program seemed to work, I sent a message to the rest of my group explaining how to send messages over the network. The first use of network email announced its own existence.”