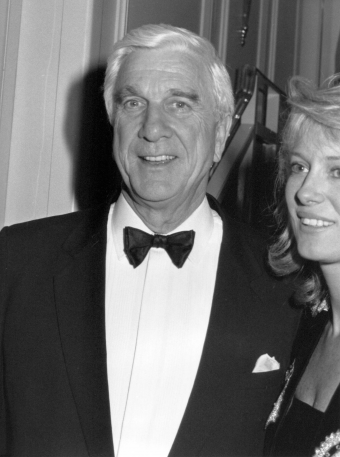 Despite spending the first 30 years of his career almost exclusively a prolific dramatic actor, today Leslie Nielsen is generally remembered as one of the greatest comedic actors of all time for his roles in films like Airplane! and The Naked Gun series. As it turns out, these two factors are more closely linked than you might think and Nielsen’s career as the “the Olivier of spoofs” would likely have never taken off if he’d not spent the first half of his career primarily only taking serious character roles.

According to Nielsen, his early acting career in the 1950s provided him with a “little gold”, recalling that he only got about “$75 or $100 per show” (about $700 – $950 today), necessitating him appearing in many dozens of shows every year to make ends meet. Lucky for him, thanks to his uncanny good looks and charm, he was never short of work, even managing to appear in 46 different television shows in 1950 alone, his first full year as an actor.

Nielsen’s big break came in 1956 when he was cast as the leading man in the landmark science fiction film, Forbidden Planet. This was his second feature film appearance after a poorly received musical called The Vagabond King that Nielsen jokingly referred to as “The Vagabond Turkey” in later interviews. Although the Forbidden Planet went on to become one of the most significant films in science fiction history, among other things partially inspiring Star Trek according to Gene Roddenberry, Nielsen was skeptical of the film’s overall quality, wryly stating in a 1994 interview that all he did was “wear a tight costume and make eyes at Anne Francis”.

The combination of the success of Forbidden Planet and Nielsen’s stunningly handsome face ensured that he continued to get steady work, being cast in various dramatic or serious roles for the next two decades, with the notable exception of the early romantic comedy, Tammy and the Bachelor, in which he had a leading role.

According to the creators of the film, Jim Abrahams, David Zucker, and Jerry Zucker, when they were deciding who to cast, a conscious decision was made to only hire actors who, up until that point, were known for dramatic roles. According to Abrahams, they felt “the key to the whole Airplane! concept and to our shared sense of humor was to do everything straight, so we did”.

This apparently didn’t go over well with Paramount who repeatedly tried to suggest seasoned comedy actors like Bill Murray and Chevy Chase for the leading roles, only to have the directors ask their “increasingly annoyed” casting director to hound actors like Robert Stack, Peter Graves and Lloyd Bridges, all actors known for serious, fundamentally unfunny roles, instead.

In regards to Nielsen specifically, the casting director was initially incredulous about casting Nielsen due to his reputation as “the big, handsome, staid leading man”. Critics at the time were likewise unenthusiastic, not being shy about stating that Nielsen was a poor choice for the part. As for Nielsen, he stated that he was more than a little irked about all of this at the time as he felt “comedy was what I intended to do all along”.

While up to this point Nielsen hadn’t really dabbled in comedy in front of the camera, his love of absurd, deadpan humor was well known to all his friends and colleagues and had been for years. For example, David Leisure, who played a minor role in the film as the Hare Krishna practitioner described Nielsen as the “goofiest motherf****r you’ve ever met in your life”. It’s also noted that Nielsen was constantly playing practical jokes on the cast and crew, with his favorite running gag being to use a device he had specially constructed by a member of the prop department. What did this device do? Nothing but make very loud, realistic sounding fart noises.

Nielsen began carrying this device with him everywhere and he liked using it in tandem with his now iconic deadpan delivery to mess with people. To quote Robert Hays, who played Ted Striker in the film, about the many ways Nielsen used the machine on set:

He’d lean against the wall and start talking with that voice of his, saying something really profound, and then [Fart noise.]. And then he’d play like he had an attack of it, so he’d start making faces and putting his hands or his fists on his stomach, groaning and stretching his neck out, and then [Repeated fart noises.].

When it was ultimately discovered by cast members that Nielsen was using a hidden fart machine to make the noises instead of creating them naturally, he began distributing replicas of the fart machines to the cast and crew to the point that rehearsals were generally filled with the sound of a “cacophony of farts”.

For Nielsen, apparently the joke never got old as even decades later he was still using his fart machine to mess with people and particularly enjoyed using it to ruin television interviews, like this one from 2003. (That’s not to mention what’s written on his tombstone, which we’ll get to in a minute.)

After the success of Airplane!, Nielsen went on to star in a number of other comedy films with varying degrees of success. The most popular of these is arguably the Naked Gun series which itself was based on an earlier TV Series called Police Squad! which was written and directed by the same trio behind Airplane!. The show was functionally the same as the films in the Naked Gun series, featuring Nielsen playing the same character along with the same deadpan jokes and gags, many of which were simply reused for the Naked Gun films.  While Nielsen ultimately won an Emmy for “Outstanding Lead in a Comedy Series” for his role in the show, it got canceled after just six episodes.

The Simpsons creator Matt Groening would later note of this,  “If Police Squad! had been made twenty years later, it would have been a smash. It was before its time. In 1982 your average viewer was unable to cope with its pace, its quick-fire jokes. But these days they’d have no problems keeping up. I think we’ve proved that.” 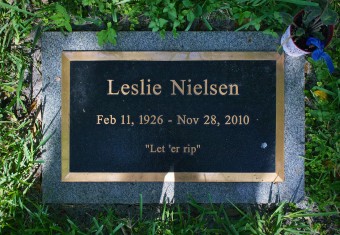 From here Nielsen became a comedy staple for the rest of his life, ultimately dying at the age of 84 in November of 2010. In keeping with his wishes, the epitaph on his tombstone read simply, “Let ‘er rip”- one final fart joke from beyond the grave.