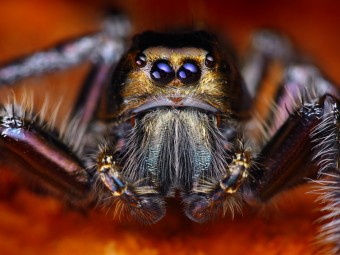 When it comes to spiders, people generally know two facts about them- that you swallow around eight of them per year and that their blood is bright blue. Fortunately, the former is absolutely not true at all, the latter, on the other hand, is mostly correct.

While it’s certainly true that spiders have blue liquid in their veins, the reality is a bit more grounded than is sometimes depicted, with the fluid a much more reserved shade of blue-ish green. Also, thanks to fact that spiders are (generally) so tiny and contain very little liquid, you’re not going to see too much of this after smashing one.

It should also be noted that, unlike humans, spiders have what is known as an “open circulatory system.” Essentially, their blood is allowed to mix with all the interstitial fluids within their bodies.  The scientific term for this mixture is hemolymph, which is a combination of the Greek word for blood (Haîma) and the Latin word for water (Lymph) and it’s defined as: “The circulating fluid in many invertebrates that is functionally similar to the blood and lymph of vertebrates”

So what in this mixture is causing the fluid in the spiders to turn blue? Well, as you may recall, human and indeed all mammal blood is red because of the presence of the protein haemoglobin. The reason haemoglobin makes blood red instead of say, green is because of the presence of iron as an oxygen carrying pigment. (And to quickly debunk another popular blue-blood myth: No-  deoxygenated human blood does not turn blue.  It turns dark red. On a related note, the red juice you see in red meat at the grocery store is not blood.)

Spiders and other arthropods don’t have haemoglobin in their bodies, rather they have a protein known as haemocyanin, which contains copper instead of iron. However, haemocyanin isn’t bound to any cells in the creature’s body like haemoglobin is, instead it just grooves around their circulatory system at its leisure. When an oxygen atom binds itself to haemocyanin, instead of turning a deep shade of red, it will instead turn a pale blue-ish green, as copper is wont to do when it oxidises. The result in spiders is less than impressive because their bodies contain so little hemolymph to start with; in larger arthropods though, this effect can be quite stunning.

For example, the blood of the horseshoe crab is a delicate shade of baby blue thanks to the presence of haemocyanin, as is the blood of lobsters, crayfish and most mollusks like slugs and snails. 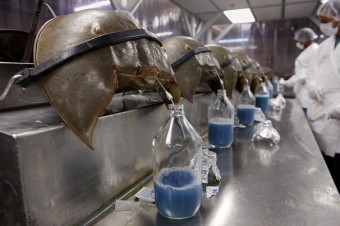 But what’s even more fascinating (and unique) about horseshoe crab blood is a chemical found in the amoebocytes of its blood. When this is exposed to a potentially dangerous foreign bacterium, it will immediately coagulate around the threat, rendering it harmless without actually destroying it. This effect is near instant and the blood can be used to detect a potential threat even if it’s diluted as much as one part in a trillion!

This effect is amazingly useful for detecting bacterial contamination in things like medicines and vaccines, or on medical equipment like needles, pacemakers, and numerous other items that are required to be sterile. In fact, no drug on the market today can be certified by the FDA unless it has been tested using this exact method (known as the Limulus amebocyte lysate test, in homage to the species of the crab- Limulus polyphemus). It’s by far the best way scientists are aware of for detecting whether a batch of medicine or vaccine has been compromised or not. As such, the blood of these crabs is worth a small fortune, selling for around $60,000 per gallon.

If you’re wondering how this blood is harvested, the crabs (over a half a million per year) are carefully picked up when they visit the shore for breeding purposes and taken in cooled trucks to certified labs where around 30% of their blood is drained, after which they’re returned to the sea. The blood cells are then separated using centrifugation. Next, the isolated cells are placed in distilled water where they will eventually burst (see Why Salt Preserves Meat for why this happens), releasing the valuable chemical inside. After being purified, it is then freeze-dried and stored to be used for testing.

Approximately 85%-97% of the crabs harvested for this purpose survive and go on their merry way after, with the crab’s blood levels returning to normal in under a week.

Even with the relatively good survival rates, all of this may sound harsh. But there is one type of animal besides humans that, at the least, is glad this property of horseshoe crab blood was discovered in 1956 by Dr. Frederik Bang- namely, the rabbit.  Before the horseshoe crab blood method (LAL) of detecting microbial contaminants, a much less accurate and time consuming system involving testing on live rabbits was used. (In this rabbit pyrogen test, the rabbits were injected with a sample of the substance to be tested.)

So to sum up, if you’re not too technical in your definition of “blood”, spiders do have slightly blue fluid coursing through their bodies. Also, horseshoe crab blood may someday save your life, if it hasn’t already.