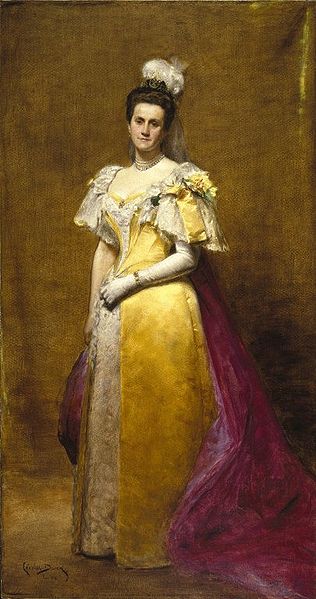 To this day, the Brooklyn Bridge remains a monumental civil engineering feat. Connecting the boroughs of Manhattan and Brooklyn and extending across the East River, the bridge is a New York City icon. When finally finished in 1883, it was the first steel-wire suspension bridge ever constructed. It is said that today over 125,000 motor vehicles cross the 130 year old bridge daily, but few know the real story and history behind this American marvel. Even fewer know who truly was in charge of overseeing its construction and completion – Emily Warren Roebling, the world’s first female field engineer.

Emily was born on September 23, 1843 into an upper middle class home in Cold Springs, New York. Her father was Sylvanus Warren, a New York State assemblyman and well-respected Mason. Her mother was Phebe Lickley Warren, who had eleven children and was very much a woman of the era. From an early age, Emily was encouraged by her family to pursue her interests and education, despite this not being the norm at the time. Many of those encouragements came from her much older brother, Gouverneur Kemble Warren.

Thirteen years her senior, Gouverneur (though his family called him “GK”) made a name for himself at West Point (which was only across the river and a mere 13 miles from his hometown) where he finished second in his class in 1850. Immediately after graduating, he went to work with the Corps of Topographical Engineers and helped create, at the time, the most comprehensive and detailed map west of the Mississippi. When the Civil War broke out in 1861, Warren immediately joined up with the Union Army and quickly rose through the ranks. During the Battle of Gettysburg, he became a Union hero when he and his troops were able to hold off the Confederate Army at Little Round Top. On August 8, 1863, he became known as Major General Warren.

In 1858, when Emily was fifteen years old, Gouverneur enrolled and financed his favorite little sister’s secondary education at Georgetown Visitation Convent in Washington D.C. (which still exists today and is the second-oldest all-girls’ school in the country.) There, she studied history, geography, rhetoric and grammar, algebra, French, as well as more “traditional female pursuits” such as housekeeping, weaving, and piano.

Upon finishing her studies, Emily, now an educated, well-rounded woman, went back to Cold Springs to care for her ailing mother. Sylvanus had passed away during the winter of 1859 and Phebe wasn’t doing well herself health-wise. For the next several years, Emily did what most young woman her age did during this time – tended to the house. War soon broke out and GK was sent to the front, where he, as mentioned previously, rose to the occasion. In the winter of 1864, missing her brother and tired of home life, Emily convinced her family to allow her to pay GK a visit at a Virginia military camp.

She arranged her trip around the glorious Second Corps Officers’ Ball, which was to be held on February 22, 1864 under the supervision of General Warren. That evening, Emily met the man that would help lead her to her destiny, Washington Roebling, a soldier under her brother’s command and the son of John Roebling, who had already become famous due to his cable wire suspension bridges he had built in Pittsburgh, the Niagara Falls region, and Cincinnati. Washington was immediately smitten with Emily, as described in David McCullough’s fantastic book The Great Bridge,

The most prominent ladies of Washington were present from Miss Hamlin, Kate Chase, and the Misses Hale down. Last, but not least, was Miss Emily Warren, sister of the General, who came specially from West Point to attend the ball; it was the first time I ever saw her and I am very much of the opinion she has captured your brother Washy’s heart at last. It was a real attack in force.

From that point forward, they wrote constant love letters to one another, back and forth (supposedly some of those letters are still in the Roebling family archives), until their love was consummated in marriage eleven months later in January of 1865. After the war, they went to live in Trenton and, then, Cincinnati, where Washington helped his father maintain the bridge he had built (later named the John A. Roebling Suspension Bridge.) Soon after, the two newlyweds went to Europe so Washington could study the construction of pneumatic caissons.

The pneumatic caisson was a very important, albeit dangerous, development used in the construction of the suspension bridge. The airlocked enclosed chamber allowed workers to work at great depths to dig out foundations while compressed air kept water and mud out. The French and British were the first to use such a contraption, but Washington soon brought the idea back to the States, developing his own version. David McCullough wrote in his book that Washington, “knew more on the subject of pneumatic caissons than any other American engineer.” The pneumatic caisson would also lead to his extreme illness some years later.

It was no coincidence that Emily joined her husband on these trips of learning and used the knowledge to her advantage when the time came. Additionally, on November 21, 1867, Emily and Washington had their first and only child together,  John A. Roebling II, while in Germany.

When it was announced that John Roebling (the senior) would design and construct “the Great Bridge,” he summoned his chief assistant, Washington, back to the States. The Brooklyn Bridge was to be the longest bridge ever constructed and one of the most expensive. Unfortunately, this barely described how big of a task and dangerous building this bridge was going to be. In the fourteen years it took to construct it, it’s been estimated that 27 people died at the hands of the bridge. On July 22, 1869, it took one of its first victims – John Roebling.

In June, 1869, with Washington by his side, John was doing a final survey of the site when a ferry boat crushed his right foot, forcing his toes to be amputated. He refused additional treatment and died several weeks later from tetanus. The capable Washington Roebling was put in charge of the project, but soon tragedy struck him as well.

Construction got under way in 1870 and Washington installed two pneumatic caissons to allow his workers to dig, reach bedrock, and install the foundations of the Brooklyn Bridge. They were the biggest pneumatic caissons ever created, larger than four tennis courts. For the next two years, Washington spent a lot of time in the caissons directing and designing. Then, in 1872, like at least 110 of his workers (there were also many unreported cases), Washington contracted “caisson sickness” or “decompression sickness” or the “bends.” He didn’t die (like more than a few of this workers), but was bedridden, blind, and nearly paralyzed. Emily, having studied alongside her husband and fully capable of the task hand, took over as chief field engineer of the Brooklyn Bridge.

Of course, few entrusted a woman to do such a job, so she had to keep appearances that she was simply taking orders from her bedridden husband. In fact, the husband and wife worked as a team. She made decisions, took notes, solved problems, and became the face of the Bridge’s construction as Washington suffered at home. Soon, Emily was accepted in construction and engineer quarters as an equal. Again, from McCullough’s phenomenal book,

By and by it was common gossip that hers was the great mind behind the great work and that this, the most monumental engineering triumph of the age, was actually the doing of a woman, which as a general proposition was taken in some quarters to be both preposterous and calamitous. In truth, she had by then a thorough grasp of the engineering involved.

The project wasn’t without its problems; delays, deaths, more “decompression sickness,” and budget issues continued. After all, no matter who was in charge, the building of the Brooklyn Bridge was an enormous task. Finally, on May 17, 1881, Emily became the first person to cross what was dubbed “The Eighth Wonder of the World,” with President Chester A. Arthur looking on and a live rooster for good luck in her lap. A week later, the Bridge was opened to the public and thousands crossed as fireworks went off overhead. Said fellow engineer Abram Hewitt,

The name of Emily Warren Roebling will…be inseparably associated with all that is admirable in human nature and all that is wonderful in the constructive world of art.

He went on to say the Bridge was “an everlasting monument to the self-sacrificing devotion of a woman and of her capacity for that higher education from which she has been too long disbarred.”

Washington and Emily Roebling went on to live a happy life in Trenton, New Jersey after the bridge completion. Washington lived until he was 89 in 1926, though never fully recovered from “the bends.” Emily would go to further success, earning a law degree from New York University. Her final essay was entitled “A Wife’s Disabilities,” a plea for women to be equal to men before the law.

She passed away at the age of 59 in 1903 as a revolutionary and one of the chief field engineers of the greatest civil engineering accomplishments of the 19th century.