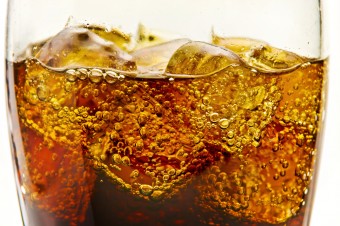 In order to make a diet soda (at least one people would popularly drink), a sugar substitute was needed. The first such artificial sweetener, saccharin, was discovered by accident. In the late 19th century, Constantin Fahlberg, after a long day working at the lab of the famed chemist Ira Remsen in Baltimore, Maryland, was at home eating dinner when he picked up a roll and bit into it. The roll was incredibly sweet. Fahlberg continued with his meal, soon realizing it wasn’t just the roll that was sweet, it was everything his hand touched. He had, quite literally, brought his work home with him, with some compound from that day’s experiments on his hands. (Yes, the first non-toxic artificial sweetener was discovered because a scientist didn’t wash his hands after getting chemicals all over them- not unlike how the effects of LSD were discovered.)

According to his statement to the Baltimore Sun, when he returned to his lab, he “proceeded to taste the contents of every beaker and evaporating dish on the lab table. Luckily for me, none contained any corrosive or poisonous liquid.” Finally, he discovered what had been on his hands: a substance from an overheated beaker “in which o-sulfobenzoic acid had reacted with phosphorus (V) chloride and ammonia, producing benzoic sulfinide.” Fahlberg and Remsen jointly published a paper together describing the “saccharin synthesis” process, but neither of them initially really understood or knew the potential it had for commercial use.

Through the early 20th century, saccharin’s popularity as a sugar substitute grew. It was cheap, easy to make, and very sweet- approximately 200-700 times sweeter than sugar, ounce for ounce. Plus, at least according to initial tests, it had no adverse side effects. In fact, doctors started prescribing saccharin as a catch-all treatment, for things like headaches, nausea, etc.

However, it was not without its detractors. For instance, President Teddy Roosevelt had a row with the Department of Agriculture’s head chemist, Dr. Harvey Washington Wiley, over saccharin.  Wiley was staunchly against the substance, stating it was a “a coal tar product totally devoid of food value and extremely injurious to health.”

Roosevelt reportedly said of this, “Anyone who says saccharin is injurious to health is an idiot. Dr. Rixey (Roosevelt’s personal physician) gives it to me every day.”(Needless to say, Wiley soon lost much of his credibility and his job.)

Due to sugar rationing in both World War I and World War II, saccharin use increased and it became a very common ingredient in various product in both the United States and Europe.

However, by the 1950s, saccharin started declining in popularity. Research began indicating that large doses of saccharin led to bladder tumors and cancer in mice. Later, it was revealed that high PH levels found in mice, and not humans, reacted differently with saccharin than human body chemistry. Once the exact cause of the tumors was determined, exhaustive tests were done to see if the same thing was happening with primates. In the end, the results came up completely and overwhelmingly negative. (Thanks to this, in 2000, saccharin was removed from U.S. National Toxicology Program’s list of substances that might cause cancer. The next year, both the state of California and the U.S. Food and Drug Administration removed it from their list of cancer causing substances.  In 2010, the Environmental Protection Agency concurred, stating that “saccharin is no longer considered a potential hazard to human health.”)

But being a supposed cancer causing agent wasn’t the only issue with saccharin as a sugar substitute, it also left a metallic taste in people’s mouths, leading to other sugar substitutes being developed. People still had a sweet tooth, but didn’t want the calories and other potential issues with sugar.

This all brings us to the first diet soda, No-Cal.

In 1904, Hyman Kirsch opened his first soda store in the Williamsburg neighborhood of Brooklyn. An immigrant from Crimea, Kirsch thought his primarily Jewish neighborhood would be delighted by the fruit-flavored seltzer he used to make while still in the old country. He was right and Kirsch Beverages Inc. was born. (Incidentally, “Kirsch” is Yiddish and it loosely translates to “juices of black morello cherries.” So, naturally their signature flavor was black cherry.)

This regional soda sold well enough to provide Kirsch and his family a small fortune. He became a prominent member of his community and nearly fifty years later, helped found the Jewish Sanitarium for Chronic Disease in Brooklyn, New York. (It is still there today, now known as the Kingsbrook Jewish Medical Center).

What does this have to do with diet soda? While vice-president at this institution, Kirsch noticed that many of the patients at the Jewish Sanitarium were diabetic. Considering he was a soda man, he wanted to provide a sweet treat for these patients by creating a beverage that was sugar-free. However, he didn’t want to use saccharine to sweeten, for the reasons mentioned above. So, as explained in a 1953 New York Times article about him and his son Morris, the two

“got together in their own laboratories with Dr. S. S. Epstein, their research man, and explored the field of synthetic sweeteners. Saccharin and other chemical sweeteners left a metallic aftertaste. Then, from a commercial laboratory, they got cyclamate calcium, and No-Cal was accepted by the diabetic and those with cardiovascular illnesses who could not tolerate salts in the sanitarium.”

No-Cal, of course meaning “no calories,” was born.

At first, they only offered a mild ginger ale flavor and sold it at dietetic counters. Soon, they realized it wasn’t just diabetics who were buying the soda, but people who wanted a tasty carbonated beverage, but none of the calories that normally go with it. They initially diversified to two other flavors, root beer and their traditional black cherry, and then later added lime, cola, and chocolate flavors. They started marketing it to “weight-conscious” women, with ads featuring a woman attempting to zip up a skirt with the words, “Time to Switch to No-Cal. Absolutely Non-Fattening.” By the end of 1953, mere months after introducing the drink to diabetic patients, the soda was pacing for five million dollars per year in sales (about $42 million today).

Canada Dry was the next company to get involved in the diet soda craze. They put a no calorie ginger ale on the market called “Glamour” (also pretty obviously aimed at women) in 1954. Between No-Cal and Glamour, by 1957, over 120 million bottles of diet soda were being sold per year.

In 1958, Royal Crown Cola got into the game and introduced Diet Rite. As was the case initially with No-Cal, the cola was aimed at diabetics and was sold at medical supply stores. Three years later, in 1961, Diet-Rite appeared on Chicago grocery shelves and diet cola became the new fad there. One year later, Diet-Rite was being sold across the country. The biggest soda companies, Coca-Cola and Pepsi, rushed to develop their own diet colas – Coca-Cola’s Tab and Pepsi’s Patio Cola. By 1965, diet cola accounted for 15% of the entire soft drink market.

With the major players now in the game, Kirsch’s No-Cal rapidly faded to nothing in market share, but not before starting a revolution in carbonated beverage drinks.