June 20, 2014 Matt Blitz
Aaron asks: Why is Rhode Island called an island when it is not? 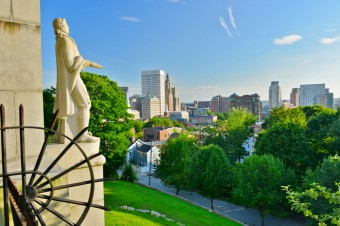 Most think the history of Rhode Island starts with Roger Williams, but the state’s “discovery” (at least by Europeans) dates back about hundred years before that to approximately 1524 and the Italian explorer Giovanni da Verrazzano (though he did most of his exploring in the name of King Francis I of France, rather than in the name of Italy). Originally making his way to Florida in an effort to find a sea route to the Pacific Ocean and trade passage to Asia, he was forced to stop at Cape Fear, North Carolina owing to the need for ship repairs.

After the repairs were complete, instead of continuing further south, he decided to head north. Verrazzano made his way past the Hudson River, Long Island, and New York Bay, before reaching Narragansett Bay, a bay that opens into the north side of the modern-day Rhode Island Sound. There, he was received by a delegation of Wampanoag people.

Later, this Native American tribe would be decimated by field fever (See: Why Native Americans Didn’t Wipe Out Europeans With Diseases), often carried by rodents that made their way to the New World on the boats from Europe, and then King Philip’s War. By the end of the 17th century, most of Wampanoag people were either dead or had been sold into slavery.

As Verrazzano explored the bay and the islands that dotted it, he kept a record of his findings. In a letter he wrote back to France, dated July 8, 1524, Verrazzano wrote, “discovered an Ilande in the form of a triangle, distant from the maine lande 3 leagues, about the bignesse of the Ilande of the Rodes.”

Though, Verrazzano actually named the island “Luisa” after the Queen Mother of France, his letter comparing the size of this small island he observed to the beautiful island of Rhodes in Greece stuck. Verrazzano’s letter, for almost one hundred years, was one of the only written descriptions in Europe dealing with this specific part of the New World.  The letter was printed in Italian in 1556, then in English in 1582, and reprinted at the turn of the 17th century in order to be accessible to those thinking of their own passage to the New World.

It is debated what island Verrazzano actually was referring to. For years, it was thought that he was talking about “Aquethneck Island” (named by the Wampanoag), now commonly called Aquidneck Island. This is the largest island in Narragansett Bay and part of the state of Rhode Island as well as officially being named Rhode Island. That said, today many scholars believe he was referring to the modern-day Block Island, which is also part of the state of Rhode Island. Either way, when the English, more specifically Roger Williams, arrived in the 17th century, they thought it was Aquetheneck Island that he was referring too.

Roger Williams arrived in Boston in February 1631 and immediately began to stir up controversy. Despite his reverend status, he disagreed with the Church of England on a variety of matters, and also felt that the Puritan church in the New World held too many ties to the old. So, when the Puritan Church of Boston offered him the position of minister, he turned it down. As he put it himself, “I dared not officiate to an unseparated people.”

Also around this time, he began missionary work with the local natives. Soon, he realized that what the European people were doing to these native peoples, taking their land without proper compensation, was wrong. By December of 1632, he was writing openly against the King’s charters and the perceived right Plymouth had to the land. As one could imagine, this did not sit well with the powers that be. He continued to speak out against the church and state’s affiliation and in 1635, he was convicted of heresy and sedition and banished from the settlement.

In the winter of 1635, Williams and a group of followers hiked 105 miles until they arrived at Narragansett Bay, where they were met by the ever-friendly and not-yet-decimated Wampanoag people, who provided them shelter. A few months later, Williams offered the local peoples goods in trade for some of the land. They accepted and “Providence Plantation” was born, named so because Williams believed he was in the protective care of God.

In 1637, a colony was established on Aquetheneck island and Williams first referred to the now well-known name, “at Aquednetick called by us Rode Island.” There is little doubt he was influenced by Verrazzano’s letter that had been studied previously by those settling near this part of the New World. The name was officially given to the island in 1644 with the declaration: “Aquethneck shall be henceforth called the Isle of Rodes or Rhode-Island.”

On July 15, 1663, English King Charles II granted a Royal Charter to the colony, “by the name of The Governor and Company of the English Colony of Rhode-Island and Providence Plantations.”  Eventually the name of the region was colloquially shortened to just “Rhode Island,” despite the main part not being an island at all. That said, officially the full name is still very nearly the same as it was in 1663: “State of Rhode Island and Providence Plantations.”  In 2009, a referendum was put to the voters to change the name, getting rid of the “Plantations” part, but was overwhelmingly voted down.