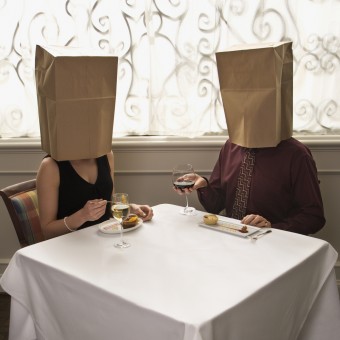 Anyone who has been in a crowded bar around closing time would agree that the higher your alcohol consumption, the more attractive you seem to find whoever you happen to be flirting with at last call. Their smile is radiant; their eyes are sparkling- everything about them is sexy, alluring and irresistible. However, if you were stone-cold sober, you might not give them a second glance, and if you get carried away and spend the night with your new friend, you may wake up the next morning and wonder just what the hell you were thinking – and seeing.

This is called the Beer Goggles phenomenon, and most of us that partake have fallen into its trap to one degree or another. The first question that comes to mind is whether or not the individuals you’re looking at are really more attractive to you or if your judgment of things is simply being impaired by alcohol.  So perhaps they really look the same to you as later, but when drunk you just don’t care, with alcohol increasing your desire for sex and suppressing your inhibitions.

Other studies have shown similar trends. For instance, another study done at the University of Bristol with 84 college students showed that, on average, they rated people’s attractiveness 10% higher a mere 15 minutes after drinking a moderate amount of alcohol, as little as 24 U.S. ounces of beer. Further, the sex of the individual the students looked at didn’t matter. Yes, guys will rate guys more attractive and women will rate women more attractive after drinking too, regardless of their normal sexual preferences.

Interestingly enough, this boost in attractiveness is not universal. In a study done at the University of Leicester in 2011, it showed that adults actually find the faces of 10 years old, less attractive when drunk, not more as when looking at adult faces.  Further, these individuals were able to accurately judge the ages of the people whose faces they were looking at pictures of.  So while attractiveness varied based on whether one has been drinking or not, the ability to judge age did not.

In any event, so if it’s truly not just us lowering our standards, what’s going on here to make other adult faces look more attractive? While further research still needs done, the leading theory currently is that it has something to do with bilateral symmetry. This simply means that if a human body was split down the vertical center, humans typically find people more attractive the closer each side of the individual is to being a mirror of the other.

A series of studies, such as one done at the London’s Roehampton University, suggest that alcohol impairs our ability to perceive asymmetry, and this could potentially be the reason for people appearing more attractive when one is under the influence.

The researchers described the experiment thusly:

We tested the hypotheses that acute alcohol consumption decreases ability to detect asymmetry in faces and reduces preference for symmetrical faces over asymmetrical faces. Twenty images of a pair of faces and then 20 images of a single face were displayed on a computer, one at a time. Participants were instructed to state which face of each of the face pairs displayed was most attractive and then whether the single face being displayed was symmetrical or not. Data were collected near campus bars at Roehampton University. Sixty-four self-selecting students who undertook the study were classified as either sober (control) or intoxicated with alcohol. For each face pair or single face displayed, participant response was recorded and details of the alcohol consumption of participants that day were also obtained.

What this boiled down to was that the sober test participants were more drawn to people with symmetrical faces, and were better at picking them out, which supported the researchers’ hypothesis. Further, intoxicated individuals were less able to notice asymmetry. An unexpected discovery was that males proved better than females at determining whether faces were asymmetrical or not. It is theorized that this perhaps has something to do with the fact that, in general, men are more sexually stimulated visually than women are, so whether consciously or not, naturally pay more attention to such things.

The researchers concluded: “The reduced ability of inebriated people to perceive asymmetry may be an important mechanism underlying the higher ratings of facial attractiveness they give for members of the opposite sex and hence their increased frequency of mate choice.”

Interestingly enough, it would seem that beer goggles work both ways. Not only will alcohol make those around you become more attractive to you, it can also turn you into a vision of epic awesomeness… at least in your own mind. (Where have you been your whole life?) That said, the alcohol in this case isn’t strictly necessary; you just need to think you drank some.

Apropos, Laurent Begue at the Pierre Mendes-France University conducted an experiment to explore the phenomenon of The Drunker I Am, The Hotter I Get Syndrome. She asked 19 patrons in a French bar to rate their attractiveness on a scale of one to seven. Their alcohol levels were then measured with a breathalyzer test. Not surprisingly, the participants who were more biffed were also more full of themselves.

That was an extremely limited sample-size, though, so as a follow-up, Begue performed a balanced placebo test with 96 male volunteers. They were told they were conducting market research for fruit cocktail, and that half of the group would be given an alcoholic drink while the other would test the non-alcoholic version. After giving the booze enough time to work its magic, all the guys recorded a fake advertising spot for the fake beverage company. Immediately after, they watched a playback and rated their own wonderfulness.

As alluded to, not just those who had alcohol, but those who believed they had alcohol, gave themselves the best reviews. Those who hadn’t had anything to drink – or had but didn’t know that they had – were the humblest among the bunch. So what have we learned? At least according to this study, in part we feel happier and more attractive after a few cocktails seemingly because we assume that we will be in the first place.

There is a definite downside here though. When a panel of impartial, sober judges took a look-see at the advertising spots, the segments done by the guys that gave themselves top marks were voted the least appealing. That, perhaps, explains why it’s so hard to impress that hot number who just showed up at the bar, when you’ve had more beers than you can count. You need to seek out someone who’s been at it as long as you – and has their outward facing beer goggles on.

So in the end, it would seem from the studies to date that, while it’s not yet fully understood, the “beer goggle” effect is probably real beyond being partially influenced by the simple fact that when your standards and inhibitions are lowered while your libido is increased, you’re going to partner up with those you might not otherwise have. But beyond that, attractiveness based on bilateral symmetry may be coming into play as well, literally making certain people seem more attractive than they otherwise would to you.