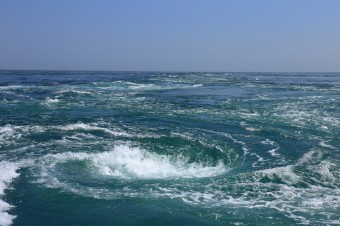 One of the Naruto Whirlpools

Where a unique combination of strong currents and geography meet, maelstroms, enormous and powerful areas of swirling water, dangerous currents and whirlpools, can be found across the globe. Although many form (and die) in a relatively short period of time in response to catastrophic events (like a tsunami), others have existed for centuries.

Found in the strait between Naruto (in the Tokusima Prefecture on Shikoku Island) and Awaji Island, the Naruto whirlpools reside in the strait of the same name. As the strait connects large inland seas with the Pacific Ocean, the significant tide moves from anywhere from 8 MPH up to 12 MPH twice daily, producing a strong current. In fact, the super-speedy Naruto current is considered one of the fastest in the world and can pose a hazard to unwary ships.

Meaning the “cauldron of the plaid,” Scotland’s Corryvreckan is the world’s third largest maelstrom. Found off the country’s west coast, this maelstrom is formed when 10 MPH tides flood a narrow strait between two islands and butt against a deep hole and tall pinnacle. A collection of standing waves (some 30 feet high) and whirlpools are created and together they produce a roar that is audible 10 miles away.

According to Scottish myth, the maelstrom is formed when the goddess of winter uses the waters to wash her plaid clothes (which turn white when clean to become the region’s seasonal blanket of snow).

To study this beast, documentary makers put a life jacket and a depth meter on a mannequin in 2006 and threw her into the maelstrom. When she was finally found, she showed evidence of being dragged along the bottom, at a depth of 262 feet.

Otherwise known to the world as Charybdis, the whirlpool that sucked in Odysseus’ boat, Garofalo is found in the strait between Italy’s mainland and Sicily. Not technically a whirlpool, Garofalo occurs when the winds and tides meet at cross-purposes in the less than two-mile wide (but over 800 feet deep) Strait of Messina. The rough seas produced are known to be very hazardous for small vessels, and occasionally, even dangerous for large ships.

Perhaps the most famous of the maelstroms, and the monster that inspired the name, Moskstraumen’s might inspired both Jules Verne and Edgar Allan Poe when they wrote of fearful and deadly whirlpools. Located off of Norway’s northern coast, Moskstraumen, unlike its brothers that occur in rivers and straits, is found in the open sea.

To form Moskstraumen, strong currents combine with semi-diurnal tides (two high-tides and low-tides each day) and powerful winds where deep and shallow water meet between two islands to create a collection of eddies and whirlpools to catch the unwary. With its largest whirlpool about 130-160 feet across and currents that can exceed 17 MPH, some claim Moskstraumen is the most destructive of all the maelstroms.

Abutting Norway’s mainland, nestled in one of its many fjords, lies the strongest maelstrom in the world, Saltstraumen. With tidal currents that reach speeds of 25 MPH, Saltstraumen boasts whirlpools that are 33 feet across and 16 feet deep, and has been around for at least two thousand years.

Created when the tide enters the Skjerstadfjorden, the Saltstraumen renders its strait impassable, although fishermen enjoy its plethora of cod, halibut and coalfish (the strong currents suck in the microscopic life at the bottom of the ocean food chain, ultimately drawing in the larger fish). Later, when the tide turns and the water rushes out, the strait becomes navigable.

Over four thousand years old, the Niagara whirlpool is formed downstream from the falls, as the fast-moving current (at 20 MPH) rushes out of the Niagara Gorge and meets an ancient underwater depression. This latter, called Saint David’s Buried Gorge, sits nearly cross-wise with the Niagara River and when they meet, a maelstrom is formed that usually produces a counter-clockwise whirlpool, although when significant water is diverted upstream, the circular current reverses.

Situated in the Bay of Fundy, in the Western Passage of Passamaquoddy Bay in between New Brunswick, Canada and Eastport, Maine, Old Sow may be perhaps the most unpredictable of the maelstroms. Depending on her mood, she presents eddies (called piglets), spouts, holes, troughs, fast currents, and the occasional whirlpool. At one point, one of her vortices was recorded along the southern end of Deer Island with a diameter of 250 feet.

As with other maelstroms, under the ocean’s surface, tidal waters travel up a deep trench (about 400 feet), meet an underwater peak (here, at about 119 feet) and dive again to about 350 feet. The strong ocean tide meets with currents coming in from other straits, creating this fickle leviathan.

Her unique name is attributed to two distinct sources: (a) the Old Sow makes sounds that sometimes mimic the grunts of a pig; or (b) it reflects a misunderstanding of the world “sough” which refers to a drain or a sucking noise.