The True Story Behind The Appalling Tuskegee Syphilis Experiment 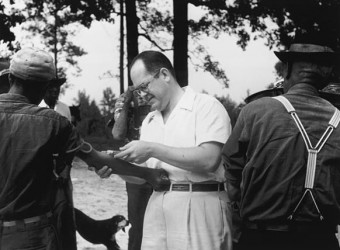 Controversial research programs, unethical experimentation, and human trials have been part of the medical field for centuries. It doesn’t make it any less wrong, but certain scientists with questionable ethics have gotten away with a lot in the name of, well, science. The more (in)famous examples of wayward science include eugenics sterilization, electroshock therapy, ionizing radiation experiments, and the CIA program MKULTRA. But the government sponsored Tuskegee syphilis experiment, a program that ran for forty years in Macon County, Alabama during the mid-20th century, is one of the more appalling and deceitful of the bunch.

In 1932, the medical community still did not know a whole lot about treating syphilis. This was the case despite documentation of the disease dating all the way back to just after Columbus made his famous jaunt across the big blue.

According to the Oxford Journal, syphilis was a “cultural embarrassment” and had many different names that exemplified prejudices of different nationalities. The German and English called it the “French Pox.” The Russians referred to it as the “Polish sickness” and the Poles as the “German sickness.” The Japanese called it the “Chinese ulcer.”

In the 16th century, Europe experienced a syphilis epidemic likely caused by the abundance of sailors traveling from sea port to sea port and doing what sailors do when they come into port. In fact, there is some evidence that points to Columbus and his crew being the ones who brought syphilis back from the new world. Either way, despite the disease being around for at least 450 years (and some evidence points to longer than that), there was no one, true, successful treatment for it. One popular remedy for several centuries was the use of mercury, which is quite poisonous in it’s own right, either by ingestion or rubbing it on the skin. This led to the popular saying “a night in the arms of Venus leads to a lifetime on Mercury.”

In 1908, Japanese scientist Sahachiro Hata (working in Germany) discovered the drug Salvarsan was somewhat effective as a treatment for syphilis. It was also quite toxic, as it came from the arsenic family. There were instances of patients losing limbs after taking the drug. Eventually, in 1912, Hata and Nobel Prize winner Paul Ehlric developed a easier-to-administer, but still toxic, drug called Neosalvarsan—which became the standard treatment for syphilis until the late 1940s.

Tuskegee University was established in 1881 as a school for former slaves to pursue higher education after the Civil War. It was the brainchild of Lewis Adams, a former slave, and George W. Campbell, a former slaveholder. A year later, in 1882, the great Booker T. Washington became president of the school and expanded the University by buying the grounds of a former plantation near by. The school was located in Tuskegee, Alabama, which was part of Macon County. As stated by Tuskegee.edu, this region was often referred to as the “Black Belt” because of “its rich soil and vast number of black sharecroppers who were the economic backbone of the region.”

In the early 20th century, the United States Public Health Service (PHS) was in charge of monitoring, identifying, and figuring out ways to treat ailments, diseases, and conditions that were impacting all US citizens. They were divided into divisions, with one division completely focused on venereal diseases. In 1957, this particular division would be transferred over the Center for Disease Control (CDC), but in 1932 the PHS covered sexual transmitted diseases.

Between 1929-1931, the Rosenwald Fund, an organization that promoted the education and health care of poor African-American farmers, sponsored a study with the PHS to identify the Southern counties with the highest rate of syphilis among African-American males. Their original intention was to identify and treat the disease. Macon County, Alabama had the highest rate, with over thirty five percent of the male population infected with the disease. By 1931, the Great Depression was at it’s height and the Rosenwald Funds were short. Despite the need to continue research, the Rosenwald Fund stopped operating in this capacity.

So, the PHS approached the Tuskegee Institute (located in Macon County) about forming a research group in order to study the effects of untreated syphilis on a black male population for a duration of six to nine months and then follow-up with a treatment plan. The Institute agreed, along with the head of the University’s hospital Dr. Eugene Dibble, and was complacent through the first year, thinking treatment was the ultimate goal. Later, they would claim they were deceived themselves and just as much victimized as the men in the study.

The study, during the first year, was led by Dr. Taliafero Clark. The PHS enrolled six hundred Macon County men, 399 with syphilis and 201 who weren’t infected, to be part of the study. None of the men actually knew what the study was for. They were lured in with the promise of “free health care,” something that none of them had, and treatment of “bad blood,” a general localized term that encompassed several different afflictions, including anemia, fatigue, and other venereal diseases.

The men were told that they were going to get free medical exams, meals, and burial insurance. For those who actually had syphilis, they were never informed of their diagnosis nor given any treatment for it. Additionally, very painful and unnecessary spinal taps were performed on many in the study.

It was said that the reason for the deception was that it would be the only way the men would stay in the study and the researchers wanted to closely observe the course of the disease over a large sample-size to see the effects as the disease progressed, even to death. But not to worry, as long as the ones that died allowed autopsies to be performed, their funeral expenses were covered…

It was actually not an uncommon practice at the time of taking the government’s consent in medical manners, rather than the individual. But in part, the deception seemed to result from the lack of respect the doctors had for the men’s intellectual capabilities (most were illiterate, which the researchers thought was helpful as it would be harder for the subjects to figure out what was going on); there was also less than subtle hints of racial prejudice.

In a letter to a colleague, according to a Michigan State 2005 medical ethics curriculum, Dr. Clark wrote that “these negroes are very ignorant and easily influenced by things that would be of minor significance in a more intelligent group.”

Dr. Raymond Vonderlehr was the on-site director of the study. He actually supported partial treatment for the men for the sole purpose of making sure they remained in the study (as in, stayed alive). He was the one who gained “consent” of the men for the painful spinal taps by framing them as a “special free treatment.” In letters he sent to the men with the header from the Macon County Health Department, it read,

You will now be given a last chance for a second examination. This examination is a very special one and after it is finished you will be given a special treatment if it is believed you are in condition to stand it.

The study, originally only intended to go nine months, went beyond a year and then, due to breakthroughs, extended. In 1934, two years after the study began, the first major medical paper was published detailing health effects on untreated syphilis. By 1936, according to the CDC, a medical paper was published criticizing the treatment plan for the men. 1940, once again according to the CDC website, brought efforts “to hinder the men (in the study) from getting treatment ordered under the military draft effort.”  You see, about 250 of them had registered for the draft and been found to have syphilis and ordered to be treated.

In 1928, Nobel laureate Alexander Fleming discovered penicillin. 1930 was the first recorded medicinal use of penicillin to treat infections. After penicillin was used to treat the survivors of the Boston Cocoanut Grove fire in 1942, it became the medicine of choice for the United States military for infections. By 1945, penicillin was the accepted treatment for syphilis.

Despite this, the subjects of the Tuskegee Syphilis Experiment were never administered nor offered penicillin as treatment. The study administrators wanted to watch the progression of the disease as the men got sick and, in many cases, died for the forty years the study went on even though for much of it a relatively effective treatment was available.  All total it’s estimated that 128 of the men died either directly from syphilis or complications related to it, 40 infected their wives (and in some cases possibly others), and there were 19 of the men’s children born with congenital syphilis.

Finally, on July 25, 1972, Jean Heller of the Associated Press broke the story that uncovered the truth about the study. A government panel ruled that the study was “ethically unjustified” and it ended. In the summer of 1973, attorney Fred Grey filed a class-action suit on behalf of the men against the PHS and it ended with nine million dollars (about fifty million dollars today) being handed out to the participants as settlement.