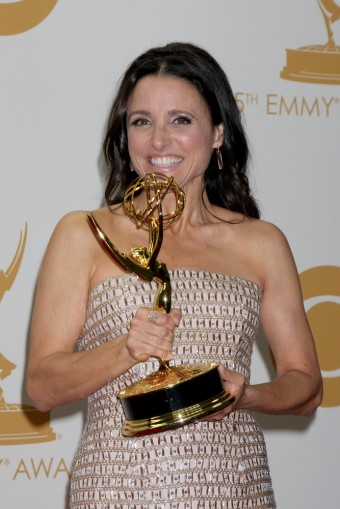 Today I found out that the father of Julia Louis-Dreyfus is a billionaire.

Seinfeld would have been a lot different with another actress playing Elaine, and that’s what would have happened if Julia Louis-Dreyfus had decided to live the life of an heiress rather than pursue acting. And that wasn’t out of the realm of possibility. Julia’s father is multi-billionaire Gerard Louis-Dreyfus and her family tree is littered with extremely wealthy and successful (in business) individuals going back over a century- as such Julia probably didn’t need to work a day in her life.

You wouldn’t know it from listening to her, though. In an interview conducted on the Howard Stern Show in 2003, Julia denied that she was brought up “rich” and didn’t need to worry about money, saying:

No, my father’s not a billionaire. And I work mainly for money… [My dad runs] this company in France called the Louis-Dreyfus Corporation. It’s a company that does well, but it isn’t the Dreyfus Fund.

While it’s true that the company isn’t the “Dreyfus Fund,” today Forbes estimates Gerard’s net worth at $3.2 billion. The company was founded by Julia’s great-great-grandfather, Léopold Louis-Dreyfus, in 1851, so the business has been kept in the family for generations.

Of course, she might not have been “raised rich” all the same—at least not billionaire rich. Julia was born in 1961, and just a year later her parents divorced. The separation undoubtedly caused some splitting of the family’s assets.  Further, the family fortune, which at one time was called one of “the five greatest fortunes in France” was diminished quite a bit due to WWII.  However, it’s something of an understatement to only say the “company does well.” Today, the Louis-Dreyfus Group has about $120 billion in gross annual sales, and is estimated to be worth about $46 billion.  “Well” indeed.

Besides Julia’s father doing OK for himself, her now deceased cousin, Robert Louis-Dreyfus was at one point the CEO of Adidas and was extremely successful in his own right in various business ventures.  His wife inherited that branch of the family fortune in 2009, also taking over management of her husband’s various companies, and today she is considered to be the wealthiest woman in Russia, with a net-worth of about $6 billion.

On top of that, there are several other members of the Louis-Dreyfus family tree, descended from Léopold Louis-Dreyfus, that have similar accomplishments in the business world.  One can only imagine what their family reunions are like.

That said, Julia is a successful, wealthy actress in her own right. She certainly earned the respect of her father for making her own way in the world rather than depending on the family fortune. In the last few years of Seinfeld, she was earning $600,000 per episode. But Julia started off acting in relatively humble beginnings—as a theatre student at Northwestern University. After she finished her education there, she became involved in the Practical Theatre Company in Chicago, which her husband had helped to start. She also worked as part of the Second City comedy troupe.

Afterwards, she auditioned for Saturday Night Live, which she was on from 1982-1985. Following that, she was cast in a couple of sitcoms and starred in two Woody Allen films before her big break: Seinfeld.

Elaine Benes was not originally included in the Seinfeld script, but producers pushed for a female character to balance out the testosterone on the show. The character of Elaine was developed and is reportedly a combination of creators’ Larry Davis and Jerry Seinfeld’s past girlfriends. Not only was the character a huge hit, but Julia was recognized for her excellent portrayal with her first major awards, a Golden Globe in 1993 and an Emmy in 1996.

When Seinfeld ended in 1998, it was said that the cast was “cursed” with not getting any other prominent roles in TV or films. It’s true that Jerry Seinfeld, Jason Alexander (George), and Michael Richards (Kramer) haven’t been seen in much, relatively speaking, since starring in the 90s sit-com. Julia, however, shrugged off the “curse” when she starred as the title character in The New Adventures of Old Christine in 2006. The show ran for five seasons, and when she won an Emmy for being an Outstanding Lead Actress in a Comedy Series, she said, “I’m not somebody who really believes in curses, but curse this baby!”

Most recently, of course, Julia has been playing Vice President Selina Meyer in HBO’s Veep, which has been another raging success. She won another Emmy award for Outstanding Lead Actress in a Comedy Series in 2012 for the role, and won in the same category the next year as well. All in all, she’s been nominated for 13 Emmy awards and won 4 of them, making her one of the most nominated actresses for an Emmy in the award’s history.

In addition, Julia has done a variety of films and voice acting for which she has won many other awards. Not exactly your stereotypical heiress. 🙂