April 1, 2014 Melissa
John asks: Why are vitamins named via the alphabet? 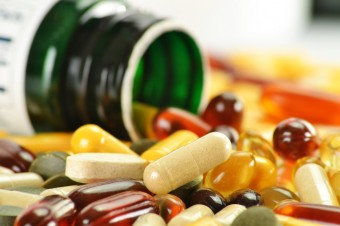 Easily identifiable by simple terms, the vitamins we recognize today were only recently isolated, identified and named.

Scientists studying why animals failed to thrive (deficiency diseases) were the first to discover vitamins. One of these early researchers, Cornelius Adrianus Pekelharing, opined in 1905 that milk had “some unrecognized substance . . . in very small quantities [that] was necessary for normal growth and maintenance.”

In 1912, while studying rice, Casimir Funk isolated an organic “factor,” which he described as amine (like an amino acid). Because it was vital to life, he combined the two words to coin the term vitamine.

The idea to use the now-familiar lettering system can be traced to Cornelia Kennedy who, in her master’s thesis in 1916, was the first “to use ‘A’ and ‘B’ to designate the new dietary essentials.” Over time, others, including Kennedy’s mentor Elmer McCollum (credited with discovering vitamin A), began incorrectly citing McCollum’s early work as the original source for the nomenclature.

At first, in addition to their alphabet letters, the vitamines were also identified as either fat- or water- soluble (e.g., “fat-soluble A and water-soluble B”). In 1920, Jack Cecil Drummond suggested dropping the “e” from vitamine to distinguish vitamins from amines and discarding the adjective “soluble”:

It is recommended that the somewhat cumbrous nomenclature . . . be dropped, and that the substances be spoken of as Vitamin A, B, C, etc. . . .

The five first vitamins discovered, between 1910 and 1920, were named A, B, C, D and E. Interestingly, D had originally been lumped together with A until it was later discovered that “two separate factors were involved.”

When a second, similar property to the vitamin originally named B (Thiamine) was discovered in 1920, both were renamed to B1 (Thiamine) and B2 (Riboflavin). The remaining B vitamins were lumped together under the designation “B complex” due to:

Loose similarities in their properties, their distribution in natural sources, and their physiological functions, which overlap considerably . . . .

Today’s vitamins skip from E to K because, like several of the Bs, substances that were once thought to be vitamins were reclassified. For example, vitamin F is today known as the essential fatty acids (omega 3 and 6). Similarly, vitamin G was reclassified as B2 (Riboflavin), and vitamin H is now Biotin.