Where the Word “Wiki” Comes From 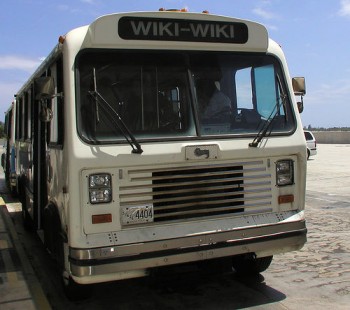 Today I found out where the word “wiki” comes from.

Howard G. Cunningham, the developer of the first wiki which was launched in 1995 called WikiWikiWeb, upon his first visit to Hawaii was informed by an airport employee that he needed to take the wiki wiki bus between the air port’s terminals.  Not understanding what the person was telling him, he inquired further and found out “wiki” means “quick” in Hawaiian; by repeating the word, it gives additional emphasis and thus means “very quick”.

Later, Cunningham was looking for a suitable name for his new web platform. He wanted something that was unique, as he wasn’t copying any existing medium, so something simple like how email was named after “mail” wouldn’t work.   He eventually settled on wanting to call it something to the effect of “quick web”, modeling after Microsoft’s “quick basic” name.  But he didn’t like the sound of that, so substituted “quick” with the Hawaiian, “wiki wiki”, using the doubled form as it seemed to fit; “…doublings in my application are formatting clues: double carriage return = new paragraph; double single quote = italic; double capitalized word = hyperlink.”  The program was also extremely quick, so the “very quick” doubling worked in that sense as well.

The shorter version of the name, calling a wiki just “wiki” instead of “Wiki Wiki” came about because Cunningham’s first implementation of WikiWikiWeb named the original cgi script “wiki”; all lower case and abbreviated in the standard Unix fashion.  Thus, the first wiki url was http://c2.com/cgi/wiki.  People latched on to this and simply called it a “wiki” instead of a“Wiki Wiki”.

It should also be noted that the proper pronunciation of “wiki” is actually “we-key”, rather than the way most today pronounced it, “wick-ee”. However, given the popularity of the mispronunciation of the word, Cunningham and others have long since stopped trying to correct people on the matter.