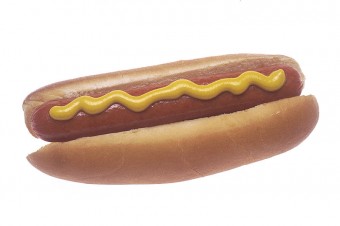 You’ll often hear that the name “hot dog” comes from a cartoon drawn by T.A. Dorgan during a New York Giants baseball game at the Polo Grounds around 1902-1906 (date varies depending on who’s telling the story). At this game, he supposedly observed a vendor, Harry Stevens, selling “hot dachshund sausages”. Dorgan, being inspired by this, drew a dachshund in a hot dog bun, but didn’t know how to spell dachshund, so just wrote “hot dog”.

As nice of a “word origin” story as this is, it’s completely false. To date, no record of the cartoon in question has ever been found, but whether it ever existed or not doesn’t matter; the term “hot dog”, referring to a form of sausage in a bun, had been commonly known at least 10 years before Dorgan supposedly drew that cartoon. Specifically, the first documented references to “hot dogs” were in a September 28, 1893 Knoxville Journal and in an October 19, 1895 edition of the Yale Record that contained a reference to “The Kennel Club”, which was a lunch wagon on campus that sold hot sausages in buns, which were referred to as “hot dogs”.

So where did the term “hot dog” actually come from? Dating back at least as early as the 1880s, it became common to call sausages “dogs”, due to the fact that people never knew exactly what meat was included in the sausages they were buying. Around that time, there were a lot of rumors that horse and dog meat were being commonly used to make sausages (there was even a song about this written in 1860 and the first documented accusations of dog meat being used in sausages is from 1845).

Though the university student’s clearly didn’t invent the name, it is thought that it was college students that popularized the name as referring to hot sausages in buns. Around this time, lunch wagons serving hot sausages in buns became common on college campuses (the bun being added so people could eat the hot sausages while they walked between classes). These lunch wagons were somewhat similar in quality of food to modern day “roach coaches”, so the students took to calling them “dog wagons” with their product being “hot dogs”, referring to the rumor that low-quality sausages were made from dog meat.