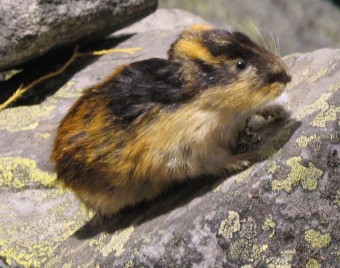 So when did this myth get started? Well, nobody knows exactly, but it was a 1958 documentary by Disney, which won an Academy Award, by the way, that appears to have popularized the myth. In the wildlife documentary White Wilderness, a few dozen lemmings were imported to Alberta, Canada so that they could be filmed in their “natural” habitat.

The film makers used close up shots to make it seem like there were thousands of lemmings migrating. They had the lemmings on a snow covered lazy-Susan style turntable and just filmed them as they ran. They also filmed them crossing a little stream. Once they got all the shots they needed, they then used the turntable to launch the lemmings over a cliff into a river and filmed this in the same way, making it seem like a mass lemming suicide was taking place. The next scene was of the dead lemmings floating in the water.

The theory behind why they would commit this mass suicide, as explained by narrator Winston Hibler, is that they get worked up from the frenzy of running with all the other thousands of lemmings: “A kind of compulsion seizes each tiny rodent and, carried along by an unreasoning hysteria, each falls into step for a march that will take them to a strange destiny.” He then proceeds to explain how they are approaching the sea, which is actually just a river because Alberta is landlocked; at which point, driven by their hysteria, they cast themselves into the sea.

None of this is true. Lemmings actually prefer to be on their own, only getting together to mate when food is plentiful. However, lemmings can literally go from massively overpopulated in a certain area to near extinction within a couple year period and then back to massively overpopulated very quickly. This actually happens in a semi-regular cycle of about three to four years and, to date, nobody knows exactly why. The standard theory is that it simply has to do with available food sources, predators, and the harsh environment they live in (often in extremely cold regions like Northern Alaska and the like).

When the lemmings are in the upswing where they are massively overpopulated, they tend to go into a phase where they like to spread out and disperse to new areas where food is more plentiful and there is less competition for that food. When this dispersal to new areas happens, they can sometimes appear to be traveling in large groups. But this is just because there are so many of them, they aren’t actually traveling together. It’s a dispersal, not a migration.

When they are dispersing, they often do find themselves in the water. But here’s the thing. Lemmings can swim. And actually, given their size (about the size of a mouse or hamster), they can swim a pretty incredible distance (about 200 meters or around 600 feet). So in their quest to spread out, they will occasionally choose to try to swim to another place and many die in the attempt, only to be washed up on shore later. There are even documented cases of this where massive numbers of them will drown in the attempt to reach a shore that was too far for them or if the water was too choppy, they can die from that, even though the distance wasn’t too far. When enough of them try to disperse to whatever far shore and fail, the dead lemmings will pile up on the beach, perhaps giving the impression they committed mass suicide in some sort of frenzied group migration. In addition, shortly after this population explosion happens, their population begins a very steep decline to near extinction, probably giving credence to the fact that all the lemmings banded together and migrated to their deaths in the water.

In any event, it is often cited that it was this Disney documentary that started the myth, but that is not the case either. There is a reference to huge numbers of lemmings jumping off cliffs from a 1954 American Mercury article, which is a full four years before Disney’s documentary came out. On top of that, there was a 1955 comic by Carl Barks titled “The Lemming with the Locket” that portrayed the same type of thing.

All of that aside, the people working on the documentary took their job very seriously, so they wouldn’t have just made something up like that; they clearly thought it was true. It was very common back then, and to a much lesser extent today, for people making nature documentaries to simulate or force actual wildlife events like this by making the animals do what was needed of them for the shot. This was just a case of the film makers thinking this was true about lemmings, so making it happen so they could film it. As to how far back the myth goes before the Disney documentary, nobody knows, but it is pretty clear that at least it was around before this documentary began filming.