The Secret Code of Hobos 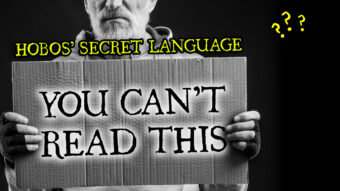 The Great Depression of the 1930s brought sweeping changes to American life and culture, not least to the American vocabulary. As Americans increasingly blamed freefalling wages and skyrocketing unemployment on president Herbert Hoover, more and more common objects were derisively renamed in his honour. Sprawling “Hooverville” shanty towns popped up in nearly every city, the homeless slept under newspaper “Hoover Blankets,” mules were hitched to broken-down cars to create “Hoover Wagons,” and turned-out pockets bereft of money became known as “Hoover Flags.” As the Dust Bowl turned vast swathes of Midwest farmland into arid wasteland, millions of “Okies” or “Gasoline Gypsies” fled for greener pastures in California, and from coast to coast the country was awash with Bums, Tramps, and Hobos.

While the exact distinction between these three groups is a matter of some debate, the most common definition is that Bums are sedentary and do not work, Tramps travel but do not work unless forced to, while Hobos both travel and work. Though widely associated with the Great Depression, hobos had been a fixture of the American landscape for decades prior, their numbers swelling during periods of economic turmoil such as the Panic of 1893. Aided by the expansion of the railroads, which allowed for faster cross-country travel and access to new work opportunities, by 1911 the number of hobos in the United States had grown to an estimated 700,000. With the unprecedented hardships of the Great Depression, these numbers exploded to over 4 million – over 250,000 of whom were under the age of 18.

Immortalized by characters like George Milton and Lennie Small in John Steinbeck’s 1937 novel Of Mice and Men, Depression-era hobos roamed the country by foot or freight train in search of work, often taking temporary or seasonal jobs like construction, ranching, or crop harvesting or doing odd jobs for private households in exchange for a meal and a place to sleep. Though often romanticized as a life of total freedom, it was a hard and often dangerous existence. Many families, struggling to make ends meet themselves, did not take kindly to the appearance of strangers claiming to be hungry and offering to work for a meal. Though many were honest people down on their luck, some were con men, thieves, or dangerous criminals on the run. Hobos were often shot at by suspicious farmers, or run out of town by municipal or railroad police. To survive in such a hostile environment, hobos developed a strong sense of solidarity and brotherhood, as well as an ethical code of conduct that emphasized self-reliance, honesty, and compassion. A hobo who abided by this code and was particularly good at finding work and evading arrest was known as a “profesh,” short for “professional.” The Code itself, established at the Hobo National Convention of 1889 – and yes, there is such a thing – read, in part:

#1: Decide your own life; don’t let another person run or rule you.

#3: Don’t take advantage of someone who is in a vulnerable situation, locals or other hobos.

#4: Always try to find work, even if temporary, and always seek out jobs nobody wants.

#8: Always respect nature, do not leave garbage where you are jungling.

#11: When traveling, ride your train respectfully

#14: Help all runaway children, and try to induce them to return home.

#15: Help your fellow hobos whenever and wherever needed, you may need their help someday.

On way of helping out fellow hobos was to pass along information on where work, food, and lodgings could be found and what areas to avoid. However, as hobos were constantly on the move, this information could not always be passed on by word of mouth, and so a complex system of symbols was devised, also known as the “Hobo Code.”

Scratched on walls, fence posts, and bridges with chalk, coal, or whatever material was available, the elaborate hieroglyphics of the Hobo Code conveyed the most essential information about a particular location, warning the “next guy” what awaited them when they wandered into town. Though varying from place to place, over time the Hobo Code coalesced into a basic alphabet of around 40 symbols, representing the most common dangers and opportunities a hobo faced on the road. Some were extremely literal, while others evolved over time to be more abstract, mirroring the development of actual logographic writing systems like Ancient Egyptian Hieroglyphs and Chinese characters. But whatever their origins, they were ideally suited to their purpose, allowing often illiterate hobos to communicate while appearing innocuous and meaningless to outsiders.

Some symbols, like the circle and arrow, served as directional markers, pointing hobos towards the location of work, food, and shelter. For example, an arrow outside a circle indicated a good road, while an arrow crossing a circle – or sometimes just a plain circle – indicated meant there was nothing to be gained in that direction.

Other symbols served to indicate the presence of certain amenities, such as an open-topped square for a good campsite, waves for clean drinking water, a rooster for a free telephone, a cross and face for a doctor, double shovels for available work, and a double arch and triangle for a hayloft you could sleep in. Still other symbols indicated the character of the people living at a particular address and how best to obtain money or a meal from them. Some methods were less scrupulous than others. For example, a top hat indicated the residents were rich, a cat or a caricature of a woman indicated a kind woman who could be moved by a sad story, a christian cross meant that religious conversation would get you a free meal, two intersecting rectangles meant the residents would give food or money just to get rid of you, while three circles connected by double lines meant a town or house was full of “suckers” or “easy marks” who were easy to manipulate.

The vast majority of the Hobo Code, however, was devoted to warnings. Some were mild, like an inverted triangle indicating that other hobos had gotten there first and that work or food was likely scarce. Others were far more dire. A box with an arch over it, for example, meant a dangerous neighbourhood, while a triangle with raised hands stood for a man with a gun, a four-legged stick figure in a box warned of a vicious dog, handcuffs stood for the police, a nightstick for a beating, and crossed bars a jail. A hashtag was often added to regular symbols to underscore the urgency of the warning.

Not all hobo graffiti was devoted to warnings. Many hobos adopted “monikers,” alter-egos which they scrawled on rail yard or box car walls, often with a date and an arrow indicating their direction of travel.

Carrying on a long tradition of graffiti stretching back to antiquity, monikers announced to the world “I was here” and marked the route of a hobo’s travels across the country. Some of the more colourful examples include “Connecticut Shorty”, “Slo Freight Ben,” and “Grandpa Dudley,” but by far the most famous moniker of all time was “A-No.1,” alter-ego of Leon Ray Livingston, “King of the Hobos.” Born in 1872, Livingston became a hobo not out of financial necessity but simply because he preferred the rambling life to staying in one place. Riding the rails for over 40 years, Livingston quickly became a legend in the community and briefly travelled with author Jack London, inspiring the 1907 memoir The Road. Livingston himself would pen 12 popular books on the hobo lifestyle, collecting stories and lore and helping to perfect the system of symbols that made up the Hobo Code.

So how widespread was the use of the Hobo Code? This isn’t fully clear. Outside of Livingston’s writings, unsurprisingly given the nature of the thing, there is little evidence of how commonly used it actually was. Even contemporary media accounts of the symbols’ use and meanings were pulled directly from the works of Livingston and other writers. Such is the case with much of hobo culture and lore, for as much as it was romanticized by others, nobody was better at mythologizing hobo life than hobos themselves. According to historian Bill Daniel:

“Hobos used their mythology as a kind of cover. The tall tales, the drawings, even the books were ways to project an image of themselves that both blew them up, but also kept them hidden.”

While Hobo Code was a real practice, the true extent of its use is difficult to gauge as the symbols were typically scrawled in hidden, obscure places, using temporary materials like chalk which have long since worn away. But whatever the truth of the matter, the Great Depression was to prove the last golden age of the American hobo. The outbreak of the Second World War and the sudden explosion of available jobs in the armed forces and industry lead to a sharp decline in migrant labour, and many of the subculture’s traditions – including the Hobo Code – faded into the realm of myth and legend. But one tradition did endure: hobo monikers, which continue to appear in rail yards and freight cars to this day. While most are the work of regular graffiti taggers, at least a few are left by the estimated 20,000 modern hobos who still ride the American rails. And so, even a century later, the freewheeling nomadic spirit of “A-No.1” lives on.

Ostler, Rosemarie, Dewdroppers, Waldos, and Slackers: a Decade-by-Decade Guide to the Vanishing Vocabulary of the Twentieth Century, Oxford University Press, 2003