The O.G. Fascist Symbol That is Still Found Everywhere 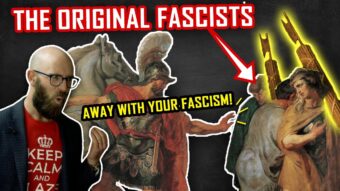 If you are the sort of person who spends a lot of time staring at old buildings, you may have noticed a strange symbol cropping up again and again: a bundle of rods bound together with criss-crossing straps, often topped by an axe head. This motif shows up just about everywhere, from theatres, universities, courthouses, and government buildings to the flags, seals, and coats of arms of countries like Ecuador, Cameroon, France, and Cuba and organizations like the Knights of Columbus. Yet for all its ubiquity, this seemingly innocuous symbol actually has a dark and controversial past. Known as the fasces [“Fass-ease”], it is the symbol which gave us the name of the authoritarian political ideology known as fascism, and from the 1920s through the 1940s was the primary symbol of Italian dictator Benito Mussolini’s Fascist Party and several other groups who emulated his regime. So why is such a symbol still prominently displayed on flags and public buildings the world over, and why did it not gain the same notoriety as that other prominent fascist symbol, the swastika?

The fasces, more correctly pronounced “fass-kiss,” means “bundle” in Latin, and is thought to have originated with the Etruscan civilization which occupied the Italian Peninsula from around 900 to 27 BCE. The earliest known example is a miniature iron version dating from the 7th Century BCE, excavated from an Etruscan tomb at Vetulonia. The fasces is believed to have been used as a symbol of power and authority by Etruscan kings, with the bundle of rods symbolizing the concept of strength through unity –  for while a single rod can easily be broken, a bundle of rods bound together cannot. Like many aspects of Estruscan civilization, the fasces was later adopted by the Romans, who called it the bipennis and refined it into a powerful political symbol with its own elaborate set meanings and rules.

The classic Roman fasces lictoriae measured around 1.5 metres in length and consisted of 13 birch or elm rods or vergae bound together with criss-crossing red leather straps. A single-headed axe was bound in among the rods, with the blade protruding either out the top or side of the bundle, while a central handle protruded out the bottom to make the whole affair easier to carry. In this form  fasces served as symbols of a Roman magistrate’s power and jurisdiction, and were carried by an attending corps of subordinate officials known as lictors, the number of lictors and fasces corresponding to the rank of the magistrate. The lowest-ranking officials, curule aediles, were allowed two, propraetors five, praetors six, proconsuls eleven, consuls twelve, and the highest rank of magistrate, the dictator, a full twenty-four.  Roman generals and emperors also often decorated their fasces with a laurel wreath, especially during triumphs, ceremonial processions celebrating military victories. And according to Roman scholar Cicero, lesser regional magistrates were not even permitted to display a full fasces, making due instead with the bacilli, a smaller version with only two rods and no axe.

While on official duty magistrates would be preceded by their lictors, who would announce his arrival and remind those present of his authority. When one magistrate met another of a different rank, the lictors of the lesser magistrate would lower their fasces as a form of salute or deference, and when a magistrate died, he had the exclusive right to include fasces on his tomb. Conversely, if a magistrate was convicted of a criminal offence, his fasces would be ceremonially broken to symbolize his disgrace and loss of authority.

By the time of the Roman Republic from 509-31 BCE, the fasces’s meaning had expanded beyond the original Etruscan concept of strength through unity and came to symbolize its bearer’s judicial power or imperium via their ability to mete out corporal and capital punishment. This often went beyond mere symbolism, as magistrates could and often did physically use the birch vergae rods of their fasces to flog petty criminals and the axe to behead more serious offenders. As the Roman Empire expanded across the classical world, the fasces became a feared symbol of conquest, with Julius Caesar carrying one through the streets of Alexandria in Egypt after defeating his rival Pompey. Closer to home, fasces displayed in public areas were often primary targets for vandalism by angry mobs during periods of civil unrest.

But there were limits to the power of magistrates, and when carried within the Pomerium – the traditional boundary of the sacred inner city of Rome – all fasces had their axe heads removed. This was to symbolize that within the cities, the power over life and death rested not with the magistrates but rather the Roman people and their assemblies, and that every citizen had the right to launch an appeal or provocatio against a sentence of death. During times of emergency, however, the Republic could choose to elect a dictator, who held absolute authority and whose lictors could carry bladed fasces even within the sacred Pomerium.

Long after the fall of Rome, the fasces persisted as a symbol of state authority and imperial power. Over time, however, the symbol became more closely associated with the Roman Republic and the concept of justice, and was widely used by nations and other groups seeking to emulate the Republic and its ideals. Following the French Revolution, the First French Republic adopted an official seal bearing the figure of Liberty holding the fasces and a coat of arms displaying the fasces topped by the Phrygian cap or Pileus, the brimless hat worn by freed Roman slaves and a traditional symbol of liberty. This same image appears in the modern-day coat of arms of Cuba. The First Republic coat of arms was redesigned in 1905 by painter-engraver Maurice de Meyere and features the fasces surrounded by olive and oak leaves representing peace and justice and a scroll bearing the Republican motto Liberté, Fraternité, Egalité. While never officially adopted by the French government, a modified version of this coat of arms bearing the letters RF for République Française still appears on modern French passports.

In the late 19th and early 20th Centuries, however, the fasces began to take on a more radical meaning, especially in Italy, where the derived term fascio, also meaning “bundle,” came to be used by various revolutionary movements to mean “group,” “union,” or “league.” This use of the term first appeared in Sicily, where in the 1880s a number of revolutionary democratic and socialist movements known as Fasci Siciliani sprung up across the island. Composed mainly of poor tenant farmers and sharecroppers, for five years from 1889-1894 the Fasci fought for higher wages, fairer rents, and land redistribution until the movement was put down by the mainland Italian government. But the revolutionary connotations of the fasces stuck, and the symbol was widely used by various independent nationalist groups both in the lead-up to and the aftermath of the First World War. Among these scattered groups was the Fasci D’azione Rivoluzionaria or “Revolutionary Action League”, founded in Milan in 1914 by a young journalist named Benito Mussolini. In 1915 the leaders of the various fasci met in Milan and agreed to join forces, creating a national organization which in 1919 became known as the Fasci Italiani di Combattimento, or “Italian League of Combatants” and in 1921 the Partito Nazionale Fascista, or “National Fascist Party”. In 1922, following his infamous March on Rome, Benito Mussolini was appointed Prime Minister of Italy by King Victor Emmanuel III. Within five years Mussolini established an absolute autocracy and declared himself “Duce” or dictator of Italy, and the terms “fascist” and “fascism” became indelibly linked with right-wing authoritarianism.

Mussolini saw his new fascist Italy as a spiritual successor to the Roman Empire, and thus appropriated a great deal of Roman iconography including the Aquila or legionary eagle, the Capitoline Wolf, the Senatus Populusque Romanus or ‘SPQR’ motto, the raised-arm Roman Salute, and – of course – the Fasces.  The flag of fascist Italy comprised the traditional Italian tricolour with the fasces superimposed over the white centre stripe, while the flag of the National Fascist Party featured a black background. The colour black was widely used in Fascist iconography, most famously by Mussolini’s paramilitary blackshirts who participated in the 1922 March on Rome. This was in turn inspired by the elite WWI Italian shock troops known as Arditi, who wore black uniforms to symbolize death. The fasces was also prominently featured on aircraft of the Italian Regia Aeronautica Air Force, on Mussolini’s personal monogram and tomb, and dozens of public buildings constructed during the fascist era including the Foro Mussolini – now the Foro Italico – in Rome. Several other groups who sought to emulate Mussolini also adopted the symbol, including Oswald Mosley’s British Union of Fascists, which used the fasces as their primary symbol before switching to their more iconic flash and circle. Following the Nazi invasion of France in 1940, the collaborationist Vichy regime of Marshal Philippe Pétain also made use of the fasces, with a double-headed axe or fransisca derived from Petain’s personal banner.

Mussolini’s fascist regime began to crumble in 1943 as Allied forces steadily pushed their way up the Italian peninsula. On July 24, the Fascist Grand Council dismissed Mussolini as Prime Minister, replacing him with Marshal Pietro Bagdolio. Mussolini was arrested and shuffled between various secret locations before being rescued by the Germans and installed as leader of the Italian Social Republic, a Nazi puppet state in the north of the country. The end finally came for Il Duce on April 28, 1945 when he and his mistress Clara Petacci were captured and shot by leftist partisans in the town of Giulino.

Yet despite its intimate association with Mussolini’s 23-year reign, the fasces never acquired the notoriety of its more infamous cousin, the Nazi swastika or hakenkreuz. The symbol continues to be prominently displayed on public buildings, flags, and crests around the world, with few being aware of its dark past. The most common explanation for this is that the symbol has simply too long been associated with republican and democratic values to be tainted by its brief association with Mussolini. However, the swastika was also a widespread and innocuous symbol long before its appropriation by the Nazis. Originating in Indian Hinduism and Buddhism as a religious icon, in the late 19th and early 20th centuries the swastika became a popular symbol of good luck, being widely used in clothing, jewelry, architecture, and as a company trademark. Several sports teams and even two towns in New York State and Ontario, Canada were even named after the symbol. A more plausible explanation for the fasces’ lack of notoriety is that Allied propaganda during the Second World War tended to focus far more on Nazi Germany and Imperial Japan, with Mussolini’s Italy often being depicted as the ineffectual third wheel of the Axis tripartite pact. The average Allied citizen was thus likely far more familiar with the swastika than the fasces as a symbol of hate and tyranny.

Unfortunately, the fasces as a hate symbol appears to be making something of a comeback. In many western nations, the open display of nazi flags and symbols is banned, forcing many neo-nazi and white supremacist groups to use more obscure symbols such as the flag of pre-Nazi imperial Germany and the fasces. According to the Anti-Defamation League, Youth for Western Civilization, Southern White Alliance, Vanguard America, Patriot Front, and the National Socialist Movement are among the many American ultra-white-wing-group which have used the fasces as part of their iconography. This all goes to show that symbols are mutable, ambiguous things, and whether a given symbol represents justice and democracy or hate and authoritarianism very much depends on who you ask.