Are All Snowflakes Actually Unique? 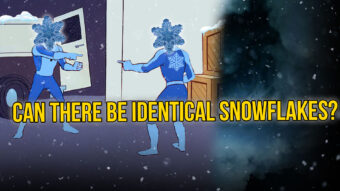 If you’ve ever spent any amount of time discussing snowflakes with almost literally anyone, you’ve probably at one point or other heard that snowflakes are all unique. But… are they? Like many widely-believed notions such as the “fact” that sugar makes children hyper (it doesn’t at all, though in controlled studies where parents are told their kids have been given sugar, the parents will often say their kids are acting extra hyper, despite no discernible change in behavior and regardless of whether the researchers actually gave the kids sugar or not) or that mice like cheese (they don’t and will actively avoid many types), the idea that all snowflakes are unique is commonly accepted as true without any supporting evidence being presented.

So, then, what does the actual evidence tell us? Are all snowflakes actually unique? Well, as ever, the universe resists simplistic black and white answers like “yes” and “no”. So let’s dive into it shall we?

The idea that all snowflakes are unique originated with a pioneering American naturalist and photographer named Wilson A. Bentley. Born in 1865 in Jericho, Vermont, Bentley spent nearly his entire life working on his family’s farm. An inveterate tinkerer fascinated by nature, in 1885 Bentley worked out how to rig up a camera to a microscope and took some of the first clear photographs of individual snowflakes. To prevent the snowflakes from melting, Bentley set up his photographic equipment outside in the dead of winter and caught the flakes on a chilled metal plate. Over the next 46 years until his death in 1931, Bentley would photograph over 5,000 individual snowflakes, no two of which, he discovered, were exactly alike. From this observation Bentley and William J. Humphreys, a physicist with the US Weather Bureau, concluded that all snowflakes must be unique – a notion which has persisted to the present day.

While Bentley and Humphreys’s conclusion was merely an inference based on a very small sample size, it is largely supported by physics. Snowflake formation is an extremely complex process, affected by a large number of subtle environmental factors. A snowflake begins life as a speck of dust or pollen known as a nucleus or seed which gets sucked up into a cloud. Here, water exist in an unstable supersaturated state – that is, as liquid droplets at a temperature well below their regular freezing point. The nucleus or seed particle disturbs this equilibrium, causing these droplets to freeze around it. This begins a chain reaction as more and more water droplets accumulate and freeze, causing the snowflake to steadily grow until it becomes too heavy to stay in the cloud and begins falling to earth. But the process isn’t quite done yet, for on its journey earthward the snowflake can continue to accumulate ice, branching into ever-more complex shapes. It may also partially melt and refreeze, collide and fuse with other snowflakes, or become coated with rime frost forming “soft hail” or graupel.

The six-fold symmetry popularly associated with snowflakes derives from the hexagonal crystal structure of ice, itself a result of the bond angle between hydrogen and oxygen in water molecules. Normally 104.4º in liquid water, this angle spreads out to 120º as water freezes to minimize the bond energy, resulting in a hexagonal crystal lattice. However, contrary to popular depictions, not all snowflakes exhibit the classic branching hexagonal shape. In fact, back in the 1930s Wilson Bentley and William Humphreys classified snowflakes into 21 basic shape categories. Over the next century this ballooned from 42 categories in the 1950s and 80 categories in the 1960s to a staggering 121 categories in 2013, with exotic names like stellar dentrites, spatial dentrites, sectored plates, hollow columns, bullet rosettes, and capped columns. However, for the sake of simplicity these elementary categories are typically grouped into 39 intermediate and 8 general categories, which are as follows:

The formation of each of these shapes depends on a complex combination of environmental factors, including humidity and atmospheric temperature. For example, simple shapes like columns and granules tend to form at low temperatures and humidity, when there is little atmospheric moisture available to make snowflakes grow. Needles form around -5 degrees Celsius, while between -2.8 and 0 degrees at low humidity snowflakes tend to take the form of flat hexagonal plates without any branches – though under rare conditions triangular plates can sometimes form. The classic multi-branched hexagonal snowflake typically forms at temperatures around -15 degrees Celsius and high humidity, a combination which both furnishes plenty of moisture with which to construct the snowflake and reduces the risk of temperature fluctuations which could cause the forming snowflake to melt and re-freeze in an irregular shape. Under the right conditions snowflakes can grow to truly impressive sizes, with the largest on record being the 38-centimetre monsters which reportedly fell on Montana in 1887.

Given the staggering number of factors involved in snowflake formation, it is exceedingly unlikely that any two snowflakes will encounter exactly the same sequence of temperature and humidity changes as they tumble through the atmosphere. This is borne out by even the most conservative definition of “uniqueness.” The average snowflake has around 100 unique features identifiable through a regular microscope, and the number of ways in which these features can be rearranged is 10 to the power of 158 or a 1 followed by 158 zeroes – larger than the number of particles in the known universe. Indeed, scientists estimate that there are 10 to the power 36 or 1 trillion trillion trillion different types of snowflakes, and a 1 in 10 to the power 18 or 1 million trillion chance of two snowflakes being alike.

However, under the right conditions, two identical snowflakes can be created. Kenneth Libbrecht, a professor of physics at the California Institute of Technology, uses a special freezing chamber to study the dynamics of ice crystal formation. Using this chamber, Libbrecht slowly cools humid air until tiny seed ice crystals start to form. He catches these crystals on a chilled metal plate and then, by carefully varying the atmospheric temperature and humidity, causes them to grow into complex branching snowflakes. By exposing two identical seed crystals to the same growing conditions, Libbrecht is able to create pairs of snowflakes that are practically indistinguishable to the naked eye. Says Libbrecht:

“I like to call them identical twin snowflakes because, like identical twin people, they’re not absolutely exactly the same but they’re very, very similar.”

Indeed, closer microscopic inspection of such “twins” is likely to reveal irregularities and differences at smaller and smaller scales – even at the atomic level. In nature, the element hydrogen exists as two stable isotopes: protium or “light hydrogen” with a single proton and electron, and deuterium or “heavy hydrogen” with an extra neutron in the nucleus. Water containing deuterium in place of protium is known as heavy water, and in purified form is used as a neutron moderator and coolant in certain nuclear reactors. Heavy water makes up around 0.156% of the molecules in regular water, meaning that even if two snowflakes are structurally identical, some 1.56 trillion of the approximately 1 quintillion water molecules which make up the flakes will be heavy water, and it is vanishingly unlikely that these molecules will be identically distributed throughout the crystal lattice. The freezing point of heavy water is also 4 degrees warmer than that of light water, meaning that the particular concentration and distribution of heavy water molecules within the crystal lattice can also have a significant impact on its development and final shape. However, at this point we are rather splitting hairs, as the original question of snowflake uniqueness centred on whether two snowflakes could be told apart by the regular human eye. Thus the answer to the question “are any two snowflakes alike?” is yes – but only under carefully controlled conditions unlikely to be found in nature.

Kennell, Joanne, Snowflakes Are Not as Unique as We Thought, The Science Explorer, December 3, 2015, http://thescienceexplorer.com/nature/snowflakes-are-not-unique-we-thought

Zentile, Catherine, The Science of Snowflakes: Are Two Snowflakes the Same? The Naked Scientist, December 22, 2007, https://www.thenakedscientists.com/articles/science-features/science-snowflakes-are-two-snowflakes-same

Libbrecht, Kenneth, The Physics of Snow Crystals, Reports on Progress in Physics No.68, 2005, http://www.its.caltech.edu/~atomic/publist/rpp5_4_R03.pdf