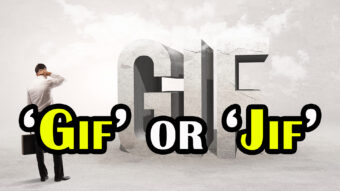 It is the single most profound question of the 21st Century, a debate which has dominated intellectual discourse for more than three decades. Some of the greatest minds and institutions in the world have weighed in on the issue, from top linguists and tech giants to the Oxford English Dictionary and even the President of the United States. Yet despite 30 years of fierce debate, controversy, and division, we are still no closer to a definitive answer: is it pronounced “gif” or “jif’?

At its face, the answer might seem rather straightforward. After all, the acronym G-I-F stands for Graphics Interchange Format. “Graphics” has a hard G, so G-I-F must be pronounced “ghif.” Case closed, right? Well, not quite. As is often the case, things aren’t nearly as simple as they might appear.

The Graphics Interchange Format was first introduced in June of 1987 by programmer Steve Wilhite of the online service provider Compuserve. The format’s ability to support short, looping animations made it extremely popular on the early internet, and this popularity would only grow over the next two decades, with the Oxford English Dictionary declaring it their ‘Word of the Year’ in 2012.

As its creator, Wilhite should be the first and final authority on the word’s pronunciation. So how does he think we should say it?

Yes, that’s right: despite all arguments to the contrary, the creator of everyone’s favourite embeddable animation format insists that it is pronounced with a soft G. According to Wilhite, the word is a deliberate reference to the popular peanut butter brand Jif; indeed, he and his colleagues were often heard quipping “choosy developers choose JIF” – a riff on the brand’s famous slogan “choosy mothers choose JIF.” And he has stuck to his guns ever since. When presented with a Lifetime Achievement Award at the 2013 Webby Awards, Wilhite used his 5-word acceptance speech – presented, naturally, in the form of an animation – to declare: It’s pronounced ‘jif,” not ‘gif’

In a subsequent interview with the New York Times, Wilhite reiterated his stance: “The Oxford English Dictionary accepts both pronunciations. They are wrong. It is a soft ‘G,’ pronounced ‘jif.’ End of story.”

While the debate should have ended there, language is a strange and fickle thing, and despite Whilhite’s assertions a large segment of the population continues to insist that the hard “G” pronunciation is, in fact, the correct one. In 2020 the programmer forum StackExchange conducted a survey of more than 64,000 developers in 200 countries, asking how they pronounce the acronym. A full 65% backed the hard G and 26% the soft G, with the remainder spelling out each individual letter – “G-I-F.” This seems to agree with a smaller survey of 1000 Americans conducted by eBay Deals in 2014, in which hard G beat soft G 54 to 41%. However, as The Economist points out, people often base their pronunciation of new or unfamiliar words on that of similar existence words, and the prevalence of the hard or soft G varies widely from language to language. For example, Spanish and Finnish have almost no native soft G words, while Arabic almost exclusively uses soft Gs. Those in countries that predominantly use hard Gs make up around 45% of the world’s population and around 79% of the StackExchange survey respondents. Nonetheless, even when these differences are corrected for, hard G still narrowly beats out soft G by 44 to 32%.

In the wake of Wilhite’s Webby Award acceptance speech, many prominent figures and organizations have publicly come out in favour of the hard-G pronunciation. In April 2013 the White House launched its Tumblr account with a graphic boldly announcing that its content would include “Animated GIFs (Hard G),” while during a 2014 meeting with Tumblr CEO David Karp, U.S. President Barack Obama threw his hat into the ring, declaring: “[It’s pronounced GIF.] I’m all on top of it. That is my official position. I’ve pondered it a long time.”

Many backers of the hard-G pronunciation, like web designer Dan Cederholm, focus on the pronunciation of the acronym’s component words, with Cederholm tweeting in 2013: “Graphics Interchange Format. Graphics. Not Jraphics. #GIF #hardg”

However, this argument ignores the many other instances in which the pronunciation of an acronym does not line up with that of its components. For example, while the A in “ATM” and “NATO” stand for “Automatic” and “Atlantic,” respectively, we do not pronounce them as “Awe-TM” or “Nah-tow.” Many also point out that there already exist words such as “jiffy” in which the same sound is produced using a J, but this too ignores exceptions such as the now-archaic spelling G-A-O-L for “jail.”

So if common sense and everyday usage can’t settle the debate, then how about the rules of the English language? As noted by the good folks at the Daily Writing Tips, words in which the G is followed by an e, i, or y – like giant, gem, or gym – are more often than not pronounced with a soft G, while all others are pronounced with a hard G. According to this rule, then, “G-I-F” should be pronounced the way Steve Wilhite originally intended: as “jif.” However, there are many, many exceptions to this rule, such as gift, give, anger or margarine. In an attempt to clear up the matter, in 2020 linguist Michael Dow of the University of Montreal conducted a survey of all English words which included the letters “G-I,” grouping them according to pronunciation. The results seemed to indicate that the soft G is indeed more common as many state, with about 65% using this pronunciation rather than the hard G. However, one thing missed with this argument is that many of these soft-G words, like elegiac, flibbertigibbet, and excogitate, are rarely used in everyday communication. When the actual frequency of a word’s use is corrected for, the number of hard and soft-G words commonly used becomes about equal.

The fundamental problem with such rules-based approaches is that unlike many other languages, English evolved rather chaotically without the guidance of a central regulatory authority like the Académie Française. Consequently, English has little in the way of consistent set of pronunciation rules, and the pronunciation of any given word depends largely on its specific etymology, common usage, or even the geographic region where it is spoken. Thus, so as far as the gif/jif debate is concerned, the linguistic jury is still very much out.

But of course, it wouldn’t be America without a major corporation weighing in on the issue. On May 22, 2013, shortly after Steve Wilhite received his Webby Award, Jif brand peanut butter took to Twitter with a post reading simply: “It’s pronounced Jif® .”

Seven year later, the brand teamed up with gif website GIPHY to release a limited-edition peanut-butter jar labeled “GIF” instead of “JIF.” In an interview with Business Insider, Christine Hoffman explained: “We think now is the time to declare, once and for all, that the word of Jif should be used exclusively in reference to our delicious peanut butter, and the clever, funny animated GIFs we all use and love should be pronounced with a hard ‘G’”.”

Alex Chung, founder and CEO of Giphy, agreed, stating in a press release: “At Giphy, we know there’s only one ‘Jif’ and it’s peanut butter. If you’re a soft G, please visit Jif.com. If you’re a hard G, thank you, we know you’re right.”

Yet despite such efforts to force a consensus, the debate continues to rage and shows no signs of stopping anytime soon. While deferring to Steve Wilhite’s originally-intended pronunciation might seem like the most logical solution, that just isn’t how language works – as John Simpson, Chief Editor of the Oxford English Dictionary, explains: “The pronunciation with a hard g is now very widespread and readily understood. A coiner effectively loses control of a word once it’s out there.”

As evidence, Simpson cites the example of “quark,” a type of subatomic particle. The word, derived from a passage in James Joyce’s 1939 novel Finnegans Wake, was coined in 1963 by physicist Murray Gell-Mann and originally rhymed with “Mark.” Over the years, however, the word evolved and is today pronounced more like “cork.”

More close to the web, the creator of the world’s first Wiki, WikiWikiWeb, Howard G. Cunningham, also pronounced this word differently than most people today. As for the inspiration for the name, during a trip to Hawaii, Cunningham was informed by an airport employee that he needed to take the wiki wiki bus between the air port’s terminals.  Not understanding what the person was telling him, he inquired further and found out “wiki” means “quick” in Hawaiian; by repeating the word, it gives additional emphasis and thus means “very quick”.

Later, Cunningham was looking for a suitable name for his new web platform. He wanted something that was unique, as he wasn’t copying any existing medium, so something simple like how email was named after “mail” wouldn’t work.   He eventually settled on wanting to call it something to the effect of “quick web”, modeling after Microsoft’s “quick basic” name.  But he didn’t like the sound of that, so substituted “quick” with the Hawaiian, “wiki wiki”, using the doubled form as it seemed to fit; as he stated, “…doublings in my application are formatting clues: double carriage return = new paragraph; double single quote = italic; double capitalized word = hyperlink.”  The program was also extremely quick, so the “very quick” doubling worked in that sense as well.

The shorter version of the name, calling a wiki just “wiki” instead of “Wiki Wiki” came about because Cunningham’s first implementation of WikiWikiWeb named the original cgi script “wiki”; all lower case and abbreviated in the standard Unix fashion.  Thus, the first wiki url was http://c2.com/cgi/wiki.  People latched on to this and simply called it a “wiki” instead of a “Wiki Wiki”.

So how was Wiki originally pronounced? “we-key”, rather than the way most today pronounced it, “wick-ee”. However, given the popularity of the mispronunciation of the word, as with “gif” now being popularly pronounced differently than the creator intended, Cunningham and others have long since stopped trying to correct people on the correct way to pronounce wiki.

Going back to gif vs jif, in the end, the choice is entirely a matter of personal preference, and as with all language and as many a linguist will tell you, how you use a word ultimately doesn’t matter as long as you are understood, and few are going to get confused on this one. But if you’d like to pronounce it the way its creator intended, go with jif, and if you’d like to follow the crowd like sheep, go with gif.

Biron, Bethany, Jif is Rolling Out a Limited-Edition Peanut Butter to Settle the Debate Over the Pronunciation of ‘GIF’ Once and For All, Business Insider, February 25, 2020, https://www.businessinsider.com/jif-campaign-settle-debate-pronunciation-of-gif-2020-2

McCulloch, Gretchen, Why the Pronunciation of GIF Really Can Go Either Way, WIRED, October 5, 2015,

Belanger, Lydia, How Do You Pronounce GIF? It Depends on Where You Live, Entrepreneur, June 20, 2017, https://www.entrepreneur.com/article/296674