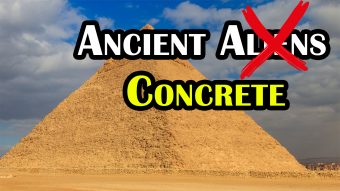 The Egyptian pyramids at Giza are among the most famous and storied monuments in the world. The oldest  of the seven wonders of the ancient world – and the only ones still standing – they have awed and inspired travellers, scholars, poets, and artists for thousand  of years. Yet despite this timeless fascination, relatively little is known about who built the pyramids or why. Few records survive of the pharaohs Khufu, Khafre, and Menkaure, and while the pyramids are assumed to be tombs, there is surprisingly little evidence of anyone actually being buried within them. Yet the greatest mystery of all is how the pyramids were actually built. The Great Pyramid of Khufu stands 146 metres tall, weighs 6 million tons, and is composed of nearly 2.3 million granite and limestone blocks weighing up to 80 tons each. Yet the structure is nearly perfectly level and square, the blocks so close-fitting that a piece of paper will not fit between them. And most astonishing of all, the work appears to have been completed in less 20 years. How such precision construction on such a massive scale could be completed so quickly by people possessing only bronze and stone tools is a question that has baffled egyptologists for centuries. While the obvious answer is, of course, as ever, Aliens, in 1974 a French geochemist named Joseph Davidovits forwarded a radical new theory- that the pyramid blocks were not cut, but poured.

Thanks to evidence left behind at ancient quarry sites like Aswan, Ancient Egyptian stonecutting techniques are fairly well-understood. Large stone blocks were hewn by first cutting a line of holes using a bow drill, into which were inserted wooden wedges. These wedges were then soaked in water, causing them to expand and fracture the stone.The rough-cut block would be carved to shape using bronze chisels and polished smooth using stone burnishers, the finished block being transported to the building site using barges sailing along the Nile. How the blocks were then moved from the river to the pyramid site itself, however, is a mystery. The traditional theory is that they were dragged on wooden sledges, but the only known depiction of this technique comes from the tomb of Djehutihotep, a provincial governor who died around 1900BC. A carving on the tomb wall depicts a giant stone statue of Djehutihotep mounted on a sledge being pulled by 172 workers, while other workers pour water or oil on the ground to lubricate its path. While calculations have shown that the statue’s weight would have been comparable to the Great Pyramid blocks and that such a lubricated sledge would have worked, no trace of Djehutihotep’s statue has ever been found – nor has any other depiction of this technique. It is thus unknown whether the use of sledges to move heavy stone objects was ever a common practice. An alternative theory is that the ancient Egyptians used log rollers, which were continuously carried forward as the block rolled along. But this explanation presents a different problem: based on the average rate of wear for such rollers, moving the 2.3 million blocks used in the Great Pyramid would have required so many trees that all of Egypt would have had to have been deforested.

The next problem is how the stones were lifted to the upper levels of the pyramid. Here the traditional explanation has the Egyptians using giant ramps – either a single linear ramp or a spiral ramp winding around the outside of the pyramid. But both these theories have serious flaws. A linear ramp would have required nearly as much stone as the pyramid itself, doubling the construction time and the material to be quarried, and a spiral ramp would have made maintaining the pyramid’s precise shape extremely difficult. In his chronicle of his travels through Egypt in the 5th Century BCE, Greek historian Herodotus describes a crane-like device used in the construction of stone monuments, but this account was written more than 2000 years after the construction of the Great Pyramids of Giza, and no other evidence of such a device has ever been found.

The final riddle of the pyramids’ construction is how the whole structure was kept square and level. One theory posits that a trench was dug around the foundation of the pyramid and filled with water, the surface of which was then used as a guide for levelling the base. While certainly plausible, this does not account for the highly precise fit and alignment of all the blocks, as a carving error of even a fraction of a degree in a single block would have been amplified down the row of stones, throwing off the alignment of the entire structure. Thus, given our current knowledge nearly every accepted theory of the pyramids’ construction suffers from at least one major flaw. Enter Joseph Davidovits.

Born in 1935, Davidovits has an impressive resume, holding a French degree in Chemical Engineering, a German PhD in chemistry, and a Professorship of Applied Archaeology at Barry University and Penn State, and was made Chevalier de l’Ordre National du Merite by French President Jacques Chirac in 1998. When in the early 1970s Davidovits turned his eye to the pyramids, he immediately noticed something strange: the limestone in the pyramid blocks did not match that of the quarries where they supposedly originated.

Natural Egyptian limestone contains around 96-99% calcite and 0.5-2.5% quartz, dolomite, gypsum, and iron-alumino-silicate, but the pyramid blocks contain only 85-90% calcite as well as extra minerals such as opal, hydroxyl-apatite, and silico-aluminate. Furthermore, the microstructure of the stone is strangely amorphous or glass-like, with large numbers of tiny air bubbles not found in natural limestone. Stranger still, many of the blocks are oddly stratified, with large fossil fragments concentrated at the bottom and lighter grains at the top – rather than distributed in alternating bands as in regular limestone. The final clue was a block found on the Giza plateau that appeared to be composed of two different kinds of stone – one half of which had eroded faster than the other. From this evidence, Davidovits drew an astonishing conclusion: the pyramid blocks are composed not of natural limestone, but rather a reconstituted geopolymer – a type of ancient Egyptian concrete.

According to Davidovits’ theory, the blocks were not quarried and transported to Giza but rather cast in place in wooden molds. This would account for the extreme precision of the pyramid’s construction, as the initial liquid state of the limestone concrete would have made the blocks self-levelling and allowed for extremely thin seams between blocks. This technique was also ideal for use on the Giza plateau, which has abundant supplies of soft, crumbly limestone otherwise unsuited to large-scale construction.

In his laboratory, Davidovits succeeded in creating a reconstituted limestone concrete using only four ingredients readily available to the ancient Egyptians: water, crushed limestone, quicklime, and natron, a mixture of salt and sodium bicarbonate found on the banks of the Nile and widely used in mummification. When Davidovits sent out samples of his lab-made concrete for blind analysis along with pieces of actual pyramid stone, every laboratory reported that the two samples were identical in composition. The result appeared definitive: Davidovits had finally cracked the age-old riddle of how the pyramids were built. In 1988 he published his results in a book titled The Built the Pyramids.

Yet despite the chemical evidence backing Davidovits’ theory, it immediately attracted overwhelming scorn and hostility from mainstream egyptologists. Among Davidovits’ greatest critics is Zahi Hawass, former Egyptian Minister of State for Antiquities Affairs, who of the theory stated:

“It’s highly stupid. The pyramids are made from solid blocks of quarried limestone. To suggest otherwise is idiotic and insulting.”

Many geologists were also dismissive of the theory, with a 2007 study by Dipayan Jana of Columbia University concluding that contrary to Davidovits’ claims, the pyramid casing blocks are in fact chemically and geologically identical to natural limestone quarried at Tura and other sites and distinct from Davidovits’ lab-made geopolymer. In turn Davidovits accused Jana of not analyzing an actual pyramid stone, while in 2006 an analysis by Michel W Barsoum of Philadelphia Drexel University independently confirmed that the pyramid and quarry stones were geologically distinct. And so the debate rages on.

Davidovits himself admits that there are still several gaps in his hypothesis, such as the 8000 tons of granite blocks used to construct the core of the pyramid. These match stone from quarries in Aswan and unlike the limestone would have to have been cut and moved by hand. But as this stonework accounts for only 0.3% of the pyramid’s weight, it does not preclude the use of cast limestone to expedite the rest of the structure’s construction. Also missing is any evidence of the infrastructure required to mix such vast quantities of concrete, but as the village that housed the pyramids’ construction force was only discovered in 1988, Davidovits is confident this evidence will eventually emerge. For now, however, his ideas remain on the fringes of archaeological discourse, naturally secondary to the more widely accepted theory of Ancient Aliens.

Berninger, Sheila & Rose, Dorilona, The Surprising Truth About How the Great Pyramids were Built, Live Science, May 18, 2007, https://www.livescience.com/1554-surprising-truth-great-pyramids-built.html

Davidovits, Joseph, They Built the Pyramids, Geopolymer Institute, May 2008