Did the Warrior Women Known as the Amazons Ever Actually Exist? 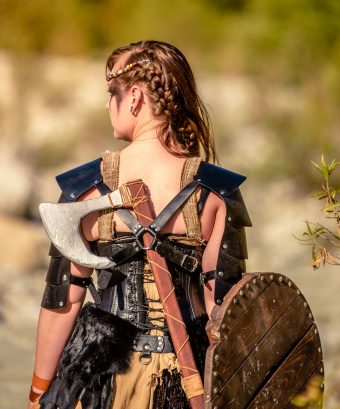 They are mentioned time and again by the ancient Greeks in both their history and mythology, going all the way back to around the 8th century B.C. They were described as formidable warriors who were so dedicated to their craft that they cut off one breast to be better archers. They lived in female-only communities, taking male lovers only once a year, solely for the purpose of procreation. These ferocious, independent, goddess-worshipping women were called the Amazons.

Their name has since been synonymous through the ages with warrior women in general, including a group supposedly living on the Amazon River in South America who explorer Francisco de Orellana engaged in a battle with. This led to the re-naming of the river to Rio Amazonas.

But did the formidable women who inspired the Greek legends and later archetype ever actually exist?

Until fairly recently, it was believed that the Amazons were created from scratch by the patriarchal Greeks as a device to highlight things like the supposed inherent superiority of males. For example, in the myths, while the Amazons were frequently praised for their skill as warriors, they usually lost to the Greeks in the end. (After all, Theseus made Antiope his concubine, and when her Amazon friends came to Athens to free her, they were defeated as well.)

However, in the early 1990s, archaeologists Renate Rolle and Jeannine Davis-Kimball independently discovered evidence that began to challenge the traditional beliefs about the Amazons. Later research by Stanford historian Adrienne Mayor would go on to use this and other evidence to rather convincingly argue that there really was a group of warrior women that inspired the legends.

As to Rolle and Davis-Kimball’s discoveries- in the Ural Steppes in a remote Russian outpost, they found the graves of over 1,000 warriors, almost 1/3 of which were women. For example, one grave contained the remains of a woman holding a baby to her breast. Nothing odd there, but her finger bones left evidence that she was indeed at the least a skilled archer- you see, these bones were worn from bow pulling. She was also buried with a dagger and a quiver filled with bronze-tipped arrows.

As for the women in general, much like the legendary Amazonians, they were extremely tall for the era- with average heights around 5 feet 6 inches (1.68 meters).

On top of that, some of the women were also bowlegged, similar to the men of the region- an artifact of their frequent and lengthy periods of horseback riding. Further, they were often buried dressed for battle. On top of that, much like the previous example, they were also generally buried with various weapons, such as bows and arrows, as well as sometimes things like swords, daggers, spears and forms of armor. As Mayor states,

More than 1,000 ancient Scythian kurgans, or burial mounds, have been excavated, containing skeletons and weapons. Archaeologists had previously assumed that weapons could only belong to male warriors. But modern DNA analysis so far has revealed that about 300 skeletons buried with weapons belong to females ranging in age from 10 to 45, and more are being found every year. The women’s skeletons show battle injuries: ribs slashed by swords, skulls bashed by battle-axes, and arrows embedded in bones.

So who were they and what is their potential connection to the Amazon legends? It was determined that these women had been Scythians- the horse-riding people named by the 5th century historian Herodotus as descendants of the Amazons.

Of course, this group definitely had men around, so how was this accounted for by Herodotus? He reported a group of captured Amazons managed to free themselves and killed off the Greeks on the ship they were being transported on.  Not knowing how to sail, they ended up running the ship aground, at which point they encountered the Scythians. One thing led to another and the Amazon women became the wives of some of the Scythian men. This new group became nomads, traveling northeast until they reached the Steppes where they began a new group known as the Sarmatians. Herodotus wrote:

As for a more modern scholar’s account of this group, Mayor states,

They [were] tribes of nomads, of the steps. They roamed the vast territory of the region known in antiquity as Scythia. That was a land stretching from the Black Sea all the way east to Mongolia… these were fierce warlike tribes. They were the first people to domesticate and then ride horses, and they perfected the invention of the recurve bow. So their lives centered on horses and archery. And they taught boys and girls how to ride and shoot from childhood so that everyone in the tribe could hunt and defend the tribe…. a female mounted archer could be as fast and as deadly as a male… [So] women hunted and fought alongside men, using the same weapons. The harsh landscape and their nomadic lifestyle created its own form of equality. This amazed the ancient Greeks, whose women led restricted indoor lives.

Mayor also argues these likely weren’t just the descendants of some group that inspired the Amazon legends, but actually potentially were the inspiration for many of the legends themselves, as this group dates back to about the 8th century BC- around the time the first mention of the Amazonian warrior women popped up. She further states, “Their tattoos of deer and geometric designs resemble the tattoos and patterns on Amazons depicted in ancient Greek vase paintings”. On top of that, “Early depictions of Amazons showed them with Greek weapons and armor. But in later representations, they wielded bows and battle-axes, rode horses, and wore pointed caps and patterned trousers characteristic of steppe nomads.”

She sums up, “a wealth of archaeological discoveries… show that there were women who behaved like Amazons—who wore the same clothes, who used weapons, who rode horses, and who lived at the same time as the ancient Greeks.”

Thus it’s possible, if not probable, that it was these Scythian tribes and the women who fought and hunted alongside the men who ultimately inspired the Greeks to develop various myths and legends about them and their ancestors, with the tales becoming more fanciful over time, such as lopping or burning off a breast to aid in archery.

And as to that, Mayor states,

It’s a fake fact that has stuck like super glue for more than 2,500 years. If people think they know anything about Amazons, it’s that supposed fact. That story first surfaced in about 490 B.C. A patriotic Greek historian attempted to force a Greek meaning on the word Amazon. Amazon is not a Greek word originally, and it was borrowed from some other ancient culture. We don’t know which, but because it sounded a little bit like the word for breast — ‘mazos’ — and if you put an ‘A’ in front of it, it means ‘without.’ So they thought he suggested it meant ‘without breast’ and that demanded a story. So people said, ‘Well, maybe they cut off one breast so they could draw a bow, shoot arrows.’ And that’s a physiologically silly idea. And in fact, it was rejected by other Greek writers in antiquity, and even more significantly, not one ancient artist ever bought that idea. All Amazons in Greek and Roman art are double-breasted, and anyone who practices archery knows that breasts are not a hindrance.