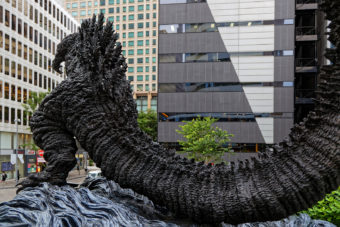 Godzilla’s roar has long been considered one of cinema’s most iconic and recognisable sounds. Oft-copied or otherwise homaged, the original and rather unique roar terrified audience goers in the 1950s and has been built upon to dramatic effect in the numerous sequels and remakes since. So how did they actually make the original sound and where did the idea for Godzilla come from in the first place?

As for the idea behind the monster, producer Tomoyuki Tanaka was looking for a project to work on after another film he was involved with got scrapped. Given the popularity of such films as King Kong among Japanese audiences, he decided to create a similarly themed movie. Except in this case, the monster would function as a not so subtle metaphor for the devastation of nuclear destruction and its radioactive aftermath- hence Godzilla being a prehistoric creature awakened and energized by atomic explosions, and who in turn shoots a radioactive heat beam out of its mouth, leaving a wake of death and destruction, with many survivors in turn suffering from radiation sickness.

As for the final version of the creature itself (and, yes, while in Western versions Godzilla is generally referred to as a “he”, in the Japanese versions the creature is an “it”), before the iconic design we know today was settled on there were differing ideas on how to best realise the monster. An idea that was proposed early on before being eventually rejected was to make Godzilla resemble a large gorilla/whale hybrid, more or less mimicking the whole King Kong thing, but making the animal somewhat amphibious too. (Note here, the name Godzilla ultimately derives from the Japanese name “Gojira”, which is in turn a portmanteau of “whale” and “gorilla”.)

This whale/gorilla hybrid idea was initially proposed by Tanaka. However, when an artist was brought in to create a design for the creature based on this general idea, it was quickly rejected because the results ended up looking too human-like; they wanted something much more unique and ancient looking.

Switching it up, sculptor Teizo Toshimitsu and art director Akira Watanabe decided to base the design of Godzilla on that of dinosaur, specifically the T-Rex, with elements of other dinosaurs such as the Iguanodon and modern reptiles like the alligators thrown in. On top of that, to double down on the atomic radiation association, they put keloid scars all over its body, which would have been familiar to Japanese audiences, with these scars commonly showing up on survivors of the nuclear blasts.

As for Godzilla’s exaggerated dorsal fins, these originally were not meant to serve any purpose in the 1954 film, and were simply added to give the creature a more distinctive silhouette. However, it would ultimately be established that they can be used by Godzilla to absorb nearby radiation or even as a weapon.

After creating the monster, Godzilla needed a voice. As it was designed to be an unnatural combination of various creatures both alive and dead, the sound crew found it especially difficult to come up with something that worked for its roar. According to famed composer Akira Ifukube, who created both Godzilla’s roar, the sound of its footsteps, and composed the film’s soundtrack, sound engineers went to a local zoo and recorded the roars and cries of virtually every animal there to try to come up with something usable.

They then tried a number of combinations of these sounds to create something distinct, failing each time because the resulting roar always sounded too familiar. Ikufube notes that the engineers eventually got so desperate they even tried distorting the cries of random animals like herons to the point that they were unrecognisable, but nothing was satisfactory.

The problem, at least in Ikufube’s eyes, was that the roars of other animals, even when heavily distorted, still sounded too natural. What they really wanted was a unique sound like nothing ever heard from an animal before, but still animal-like, and a little terrifying. Thus, scrapping all the previous sounds, despite working under an incredibly tight deadline, Ikufube decided to look at other potential means to make the roar. For the solution, he states, “For the roar of Godzilla, I took out the lowest string of a contrabass and then ran a glove that had resin on it across the string…. The different kinds of roars were created by playing the recording of the sound that I’d made at different speeds.”

And just as a brief aside here when talking about the tight deadline in scoring movies in Japan at the time, when asked about whether his now iconic music for Godzilla was among his favorite compositions, Ikufube stated,

Unlike American film score composers, Japanese film score composers are given only three or four days in which to write the music for a movie. Because of this, I have almost always been very frustrated while writing a score. I therefore can’t select any of my scores as favorites.

Going back to the roar, the resin on the glove helped create the added friction needed while being dragged across the string to make a noticeably grating sound that would hopefully cause a feeling of unease in those who heard it- akin to nails on a chalkboard, but with a lot more depth.

Attempting to recreate some version of Ikufube’s sounds for the 2014 version, Erik Aadahl and Ethan Van der Ryn, who created the new roar, stated, “We dissected that original roar and figured out exactly which key musically it was in, which is a C to D on the piano, and the finishing bellow that has the same notes on a lower octave. We figured out the timing, cadence and musical pitch of that original roar, and then started to experiment with different ways to re-create it.”

After a whopping six months of experimenting, they settled on a combination of sounds, though as to how they came up with them, they’ve promised to take that secret with them to the grave. Said Aadahl, “I think more so than any other sound effect we’ve designed, we have a certain protectiveness over that sound. It’s when you’re giving voice to something, you’re giving it its soul. And if we tell everybody exactly how we did it, people will think of that when they hear the roar, and we want them to think of Godzilla.”

That said, what little they have revealed is that the sound, much like Ikufube’s, was the product of friction using something man-made, rather than modifying an animal sound. They also note that over the course of their experiments they played with things like car doors with rusty hinges, as well as rubbing the heads of drums, among other things. They further state they found that using the plastic sole from a hiking boot on the strings of a double bass produced the closest they could get to the original roar in their experiments.

During the course of all of this, to get an even more unique sound, Van der Ryn states, “We bought a microphone that was able to record above the range of human hearing. We started experimenting will all different types of sounds — sounds that we couldn’t actually hear when we were recording. But when we slowed them down into the human range of perception, we had an incredible palette of normally invisible sounds that people normally don’t get to hear.”

Finally, to get proper echo sounds, as well as what it would sound like from within a building or a car, etc. (basically different ways it might be heard in the final film), they managed to convince the band Rolling Stones to let them use their tour speakers. They then set everything up outside at various locations at Warner Brothers studios, and simply blared the roars at high volume and recorded the result from various other locations nearby.

Naturally, they got some complaints about this, with Aadahl stating, “The neighbors started tweeting, like, ‘Godzilla’s at my apartment door! And we were getting phone calls from Universal Studios across town, because tour groups were asking, ‘What’s all that commotion going on down in the valley?’ The sound that we were playing actually traveled over 3 miles… 100,000 watts of pure power.”

Going back to the original Godzilla, if you’re wondering about the aforementioned footstep sounds, according to Ikufube, the story behind those was,

One of Toho’s electrical engineers made a simplistic amplifying device some time before production on GODZILLA – KING OF THE MONSTERS got underway. It was just a box that had several coils connected to an amplifier and a speaker in it. When you struck it, the coils would vibrate, and a loud, shocking sound would be created. I accidentally stepped on the device while I was conducting the score for a movie that was produced shortly before GODZILLA – KING OF THE MONSTERS was made. I said, “What the heck is that?” when I heard the noise that was produced. When I was asked to create Godzilla’s footfalls, I decided to use the device.

Ever wonder how they made the sound effect for the lightsaber? Well, wonder no more, sound engineer Ben Burtt states, “In the booth where we projected the films… Those projectors would make a hum. They weren’t running, they were idling, the motors would just sit there with this kind of magical, mysterious humming sound that I thought was musical in a way and I thought that’s probably what a lightsaber would sound like… And I was searching for some other element, and I had a tape recorder with a broken mic cable that the shielding had come off of and when I walked passed a television set in my apartment it picked up the hum from the picture tube directly into the broken wire, and that made a buzz, and I thought, that’s a great buzz, that sounds dangerous… normally a sound person doesn’t want a buzz or a hum, but in this case a buzz and a hum was the answer.”

Moving on to the famous “Star Wars scream”, more properly known as the “Wilhelm Scream”, heard in hundreds of movies, this was created via the vocal talents of Sheb Wooley, perhaps better known for his hit 1958 song “Purple People Eater”. The genesis of the scream was that Wooley had an uncredited part in the first film the scream was heard in, a 1951 film called Distant Drums. At one point during the film, Captain Quincy is leading his soldiers through a swamp when one of them gets attacked and dragged under by an alligator, screaming in the process. During post-production recordings, Wooley recorded various vocal sound effects for the film, including a batch of screams.

So why was it dubbed the “Wilhelm Scream” if the man who did the scream was named Sheb Wooley? After being plucked from the Warner Brothers stock sound library, the scream was used in the 1953 film The Charge at Feather River, starring Guy Madison as Private Wilhelm. The sound effect is used when Private Wilhelm is shot in the thigh with an arrow. The scream was nicknamed “Wilhelm” from then on.

The Hollywood tradition / inside joke of purposefully using the Wilhelm scream in a variety of films began with aforementioned sound effects designer Ben Burtt, who worked on numerous films, including Star Wars as noted. He noticed the scream being used in certain Warner Brother’s films, such as Them in 1954, Helen of Troy in 1956, and The Green Berets in 1968. Burtt then began slipping the Wilhelm Scream into every movie he worked on, beginning with George Lucas’s Star Wars: A New Hope. And it just sort of caught on from there.