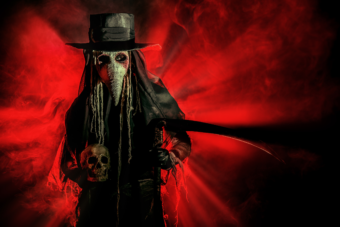 In mid-2005 players logging on to play the popular online multiplayer game World of Warcraft found themselves besieged by a virulent virtual plague nobody knew how to cure or effectively combat. For around a month the plague spread unchecked throughout the kingdom of Azeroth, killing tens of thousands of players’ characters and intriguing experts who’ve since used the plague as a model for real world bioterrorism and epidemic research.

Known as the Corrupted Blood Incident, the plague’s genesis can be traced to a September 13th World of Warcraft update that introduced a new dungeon and super-boss for high-level players to test their mettle against- an ancient blood god called Hakkar the Soulflayer.

While felling the powerful foe, any player who got too close to Hakkar while he was in the throes of death would be afflicted with potent debuff called Corrupted Blood which, in addition to considerably initial damage, would cause additional damage every 2 seconds for a total of 10 seconds.

As an idea of how dangerous this debuff was, it’s noted that this single attack could near instantly kill any low-level player. On top of all this, the debuff was also highly contagious and could be spread to any nearby player if they similarly got too close while a given player was still being affected by it.

Further, because of the way the debuff worked, a player who survived an initial infection could be re-infected by an ally and in turn, pass the debuff on to others, with this process potentially being repeated until the player either died or left the vicinity of Hakkar’s corpse or another who was infected.

Now the original intention on behalf of Blizzard (the makers of World of Warcraft) was for this debuff to be limited exclusively to the encounter with Hakkar and by extension the special high-level dungeon he resided in. However, as with many plagues, it turns out there was a very simple way to spread this to the wider world- animals.  You see, players (and eventually Blizzard) realised that a character’s pet could similarly be infected with Corrupted Blood, and it didn’t take long for players to notice that this could be spread to other places if they dismissed their pet within a few seconds of it being infected. Why was this important? Because the player could then recall the still infected pet at any time, including, say, in the middle of a populated city.

Exactly who first noticed this isn’t clear and Blizzard themselves have since admitted they have no idea who the virtual patient zero was or if the initial spread was intentional or just by accident via recalling a pet the person didn’t know would still be infected.

Whoever it was, the first server known to be struck by the virtual plague was the Realm of Archimonde, which was devastated when an unknown player unleashed the Corrupted Blood on the city of Iron Forge. Because, as noted previously, those afflicted with Corrupted Blood would immediately receive significant damage, Corrupted Blood was potent enough to outright kill some low-level players while many higher level characters were killed by the resulting drip feed of damage caused by the debuff’s secondary effect and the ability to get it again from others around.

You might think that this would burn itself out quickly with no widespread damage, but here’s the thing- while NPCs (Non Player Characters) could be afflicted with Corrupted Blood, because they couldn’t die, they would act as carriers of the disease, facilitating the spread of the plague and ensuring that after everyone died and respawned, the reaping of life would begin anew.

For days after, the cities throughout Archimonde were littered with skeletons and news of the virulent, deadly plague sweeping across the server caused quite the commotion in the spheres of gaming and tech journalism. Initially, most assumed that the plague was an in-game event of some kind, perhaps to celebrate the recent update, and some even applauded Blizzard for their ingenuity in creating what one player described as “the first proper ‘world event’” ever seen in World of Warcraft.

Internally, however, Blizzard employees were initially baffled by the spread of the virtual disease and it took some time to figured out that Hakkar the Blood God was responsible for the untold death and destruction being rained down upon the denizens of Azeroth.

During this time, the plague spread to other servers and before long entire cities were devoid of life- the streets paved with the bones of the dead.

Frustrated with a lack of communication from Blizzard, as Blizzard’s chief of staff, Shane Dabiri, would later discuss, without instruction players began setting up their own quarantines around major population centres to halt the spread of the plague. In addition, higher-level players who were capable of surviving the effects of the Corrupted Blood began venturing into the cities to seek out clues as to what was going on, while lower levels players who couldn’t, would stand guard outside, warning approaching players not to enter the infected area.

On top of this, players with characters that had access to healing magic rushed to help in any way they could, working in shifts to heal infected players and stem the flow of virtual blood. Again, nobody told anyone to do this, the players did it of their own volition, and by the time Blizzard released an official statement about the plague that also asked players to voluntarily quarantine themselves while they fixed the problem, players in the most severely infected areas had already done exactly that.

Unfortunately for everyone, Bilzzard’s first few attempts to put a stop to the plague failed spectacularly thanks to a small, but equally as dedicated subsection of players who actively resisted Blizzard’s attempts to eradicate the plague. This began a game of cat and mouse between Blizzard and players who wanted to keep spreading the disease, apparently just for their own amusement- just as in real life, some people just like to watch the world burn.

A shadowy cabal of players intent on spreading the plague further and further spent their time hiding in the mountains, periodically returning to cities to break quarantines and ensure NPCs remained infected, as well as hopping between realms to avoid server purges. All in all it took Blizzard around a month to fully rid the game of the plague and they were forced to quite literally reset the entire world, as well as issue a patch to get rid of the bug that allowed pets to spread the disease beyond its intended original boundary.

Along with being a frankly amazing story, the Corrupted Blood incident has endlessly intrigued experts on infectious diseases and bioterrorism who feel the reactions of players and Blizzard can serve as a useful model for real world pandemics and terrorist attacks.

For example, in 2008, epidemiologist Nina H. Fefferman noted that the Corrupted Blood incident closely (though not perfectly) mirrored a real world epidemic, pointing specifically to how many players initially ignored Blizzard’s warnings to stay away from populated areas and the fact that opportunistic players quickly used the situation to break long held in-game taboos, all especially similar to how real people react in a comparable real world situation. Fefferman also noted that the origins of the Corrupted Blood plague and it’s spread were eerily similar to modern epidemics, noting of the virtual disease:

it originated in a remote, uninhabited region and was carried by travelers to urban centers; hosts were both human and animal, such as with avian flu; it was spread by close spatial contact; and there were asymptomatic individuals – in this case, invulnerable NPCs

Likewise terrorism experts have also noted that there could be some value in studying the response of players to the Corrupted Blood incident. For example, in a 2008 interview with Wired Charles Blair of the Center for Terrorism and Intelligence Studies explained that the game and the mentality of players who willingly engaged in spreading a virtual plague could potentially be used “to study how terrorist cells form and operate”.

As to why players’ behaviors in many cases mimicked real life, Dr. Sherry Turkle of MIT noted, “It’s not that it’s not part of your real life just because it’s happening on the screen. It becomes integrated into really what you do every day. And so where you have loss of that part of your life that was involved in the habits and the rituals and the daily life, it’s very traumatic. It is play, but it’s very serious play.”

Unsurprisingly, Blizzard weren’t happy about these types of comparisons, releasing a statement that read, in part:

As we have always stated, World of Warcraft is first and foremost a game. It’s never been designed to mirror reality or anything in the real world.