One Down, Five to Go 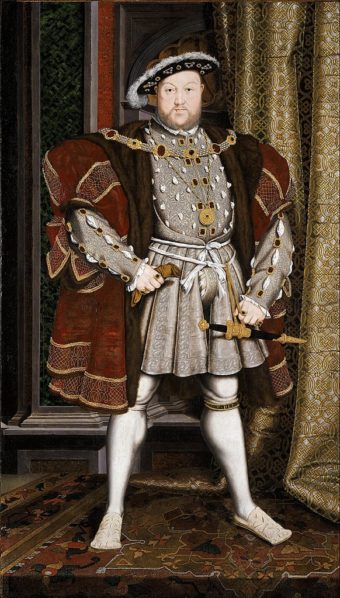 Exactly when King Henry VIII first began contemplating having his marriage to Catherine of Aragon annulled isn’t clear, though court gossip from the time suggests that the thought possibly entered the King’s mind as early as 1520. More concrete sources suggest that the king began to seriously consider giving his first wife the old heave ho in 1524, upon learning from court physicians that Catherine could no longer bear children.

You see, as with so many monarchs, King Henry was obsessed to an almost comical degree with having a son, something he was apparently unable to do with Catherine who stubbornly gave birth to a girl in 1515 after suffering several miscarriages.

As Kings, and indeed many men of standing in the era, were wont to do, beyond hitting the hay with his wife, Henry on the side took a mistress, one of Catherine’s ladies-in-waiting, Mary Boleyn, in the 1520s. While this affair is rumored to have resulted in at least two children being sired by the King, Henry himself wouldn’t acknowledge either of Mary’s children as his own.

When two is deemed better, surely three is best and in 1527, King Henry began trying to woo Mary’s younger sister, Anne.  Anne reportedly rebuffed Henry’s advances, taking advice from another future queen called Beyonce and refusing to give him what he wanted unless he put a ring on it.

And so it was that Henry tasked his finest biblical scholars with finding a loophole in the Bible that would let him divorce Catherine so as to be able to have his way with Anne.

Eventually such a loophole was found in the form of Leviticus Chapter 20 Verse 16, which reads in part: “If a man shall take his brother’s wife, it is an impurity; he hath uncovered his brother’s nakedness; they shall be childless.”

If you’re wondering how this applied to Henry, we should probably mention that Catherine was his dead brother, Arthur’s, former wife who ultimately became Henry’s wife in part because of a dispute over returning the rather large dowry her parents had sent when she married Arthur…

Henry took this to mean that his marriage was cursed, pointing to his offensive lack of male heirs as proof. The pope remained unconvinced and refused to grant Henry the divorce. Annoyed, Henry had the archbishop of Canterbury declare his marriage to Catherine null and void on May 23, 1533 anyway, though before this in secret he married Anne Boleyn in January of 1533.

This, unsurprisingly, caused a schism between the King and the Pope and set in motion events that would eventually see Britain break free from Catholic rule– all because King Henry had the hots for his wife’s friend.

In the end, this did not work out for poor Anne, however. While she dutifully became pregnant seemingly immediately upon their secret marriage (or perhaps got pregnant before, which is why the date of the supposed secret marriage took place long before his divorce), she had the audacity to give birth to a girl and then had a series of miscarriages.

In the meantime, Anne had made a lot of enemies at court, and they started to plot against her. She was arrested in 1536 and brought up on charges of, ironically, adultery (nobody seemed to mind the King doing the same, of course- it’s good to be the King) and incest (one can only imagine if there was even a smidgen of truth to that, the King, who had previously had her sister as a mistress, was no doubt happily involved…). Along with this, she was also accused of plotting to murder the King for good measure. Which, to be fair, if that one’s true, we’re not really sure we’d blame her for it.

Her true crime, of course, was not giving birth to a son. In the end, she was found guilty and sentenced to beheading.

Interestingly, shortly before the sentence was carried out on May 19, 1536, her marriage to King Henry was annulled as he claimed that he had never been legally married to her. After all, how could you marry someone when you were already married to someone else?

Anne’s head was removed during a private execution with one quick and clean stroke of a sword and the King moved on to the next woman in line.