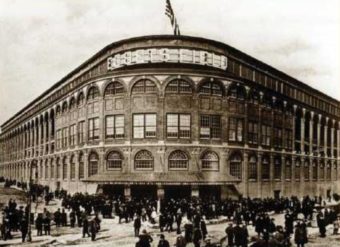 Nobody likes to move—it’s a hassle to pack up all your stuff and head for someplace new and unfamiliar. But sports teams do it all the time, and perhaps no other team move was as shocking as when the Brooklyn Dodgers left for Los Angeles in 1957. Here’s why the team skipped town after decades in Brooklyn.

When the Brooklyn Dodgers first started playing at Ebbets Field in 1913, baseball wasn’t yet the popular sport it became a decade or two later. The stadium, located in the Brooklyn neighborhood called Flatbush, sat 18,000 fans when it opened, but was slowly expanded to a maximum of 32,000 seats by the mid-1950s—which, as far as Dodgers owner Walter O’Malley was concerned, was still too small to host a team of such stature; the Dodgers had appeared in nine World Series by that point.

So, much like professional sports team owners do today, O’Malley started considering the possibilities of a new stadium—and he wanted the City of New York to pay for it. The commissioner of the New York City Parks Department, Robert Moses, was happy to oblige…provided that he and the municipal government got to decide where the stadium would be built. Moses wanted to put the new ballpark in Flushing Meadows in Queens. The city would pay for it, and the city would own it. What a deal!

Not for O’Malley. Before owning the Dodgers, he’d made his fortune as a real-estate developer. He knew that part of the financial benefits of owning a sports franchise was owning the stadium, so he rejected Moses’s offer. His counteroffer: He wanted Moses to condemn a large parcel of land along Brooklyn’s Atlantic Railroad Yards under a federal law called Title I, which allowed the city to condemn unused land for public works projects.

Then, O’Malley figured, he could buy the land from the city at a bargain rate. Moses wasn’t having any of it, in part because he thought (correctly) that O’Malley was just trying to get a good deal on the land, but also because he didn’t believe a baseball stadium fell under the category of “public-works.” Moses had a stricter interpretation—he defined public works to mean projects like playgrounds, bridges, and subsidized housing.

But O’Malley simply didn’t want to move the Brooklyn Dodgers to Flushing Meadows. He told Moses, “If my team is forced to play in the borough of Queens, they will no longer be the Brooklyn Dodgers.” Apparently that didn’t matter to Moses, and he basically gave O’Malley an ultimatum: the only way the city would pay for a new ballpark was if it was the one in Flushing Meadows.

Moses didn’t want a gigantic new stadium anywhere in Brooklyn, citing concerns over traffic and a need to redo subway and streetcar schedules and routes. Also factoring into Moses’s rejection of O’Malley’s plan was that on those four city blocks of abandoned land in downtown Brooklyn, O’Malley wanted to build a domed stadium—the first domed stadium.

Domed stadiums became the rage in professional sports after the Houston Astrodome opened in 1965. It was a way to host outdoor sporting events for tens of thousands of spectators in regions where rain, snow, or heat were a factor. Some of the most famous domes in sports history: the Kingdome in rainy Seattle, the Metrodome in snowy Minneapolis, and the Astrodome in scorching Houston. In the 1950s, the idea of building a domed ballpark was scoffed at. It would be an architectural novelty—maybe even an impossibility.

In May 1955, after architect Norman Bel Geddes politely rejected O’Malley’s request to devise an Ebbets Field renovation plan that included building a roof over it, O’Malley wrote to quirky architect and inventor Buckminster Fuller. Fuller was known for creating domed structures, and at one point proposed building a dome over midtown Manhattan. But when given the chance to build one over a stadium, Fuller jumped at the idea and turned the task over to students in the graduate-level architecture class he taught at Princeton University. Led by a budding architect named T. William Kleinsasser, the students designed a plan for a domed stadium in Brooklyn.

Among the proposed features of the dome, which would have opened on O’Malley’s favored site in 1960:

Moses was right to have reservations about squeezing all of that into four city blocks in the heart of Brooklyn. The city wouldn’t permit it, and O’Malley had no choice but to move the team, especially after he’d already made a deal to sell Ebbets Field to a real-estate developer, in part to force action on the new stadium.

Moses and the City of New York essentially called O’Malley’s bluff. The city council of Los Angeles, following the news of the new stadium developments, reached out to the Dodgers owner in 1955 and again in 1956, suggesting he make the Dodgers the first Major League Baseball team to play in Los Angeles. After the dome deal fell through, O’Malley accepted the offer and the Dodgers played their last game in Brooklyn on September 24, 1957. In the 1958 season, the Brooklyn Dodgers became the Los Angeles Dodgers.

What New Yorkers didn’t count on was that at the same time the Dodgers left New York, the New York Giants were moving to San Francisco. (The owner, Horace Stoneham, was planning to move to Minneapolis, but O’Malley and others convinced him to move to the West Coast instead.) Suddenly, the biggest city in the United States, which had once fielded three Major League Baseball teams, had only one, the New York Yankees.

Major League Baseball quickly scrambled to fill that void, and in 1962 awarded the city an expansion team, the New York Mets. Initially, the Mets played in the Giants’ old stadium, the Polo Grounds, but two years later they were playing in Shea Stadium—a stadium built by the city and owned by the city. It was built on the exact parcel of land in Flushing Meadows that Moses had offered O’Malley as a new stadium for the Dodgers.

Oddly enough, right across the street from where the Brooklyn dome would’ve sat is the Barclays Center. The arena is home to the Brooklyn Nets of the NBA.