August 2, 2017 Melissa
Tristan N. asks: What are the longest odds on a sporting event that ended up having to be paid out? 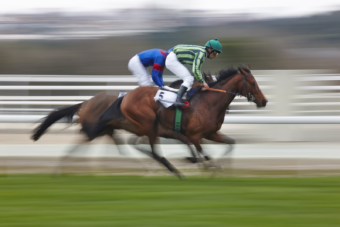 Given the nature of sports gambling and so little publicly available documented evidence in the field throughout history, it’s impossible to know for sure what the longest odds were on a sports bet that ended up having to be paid out.  However, as far as known documented instances are concerned, it would seem the longest odds paid out on any sports bet were probably what ultimately amounted to 2,800,000-1 odds on a 50p ($0.66) bet placed by one Fred Craggs of the UK.

The bet in question was an eight horse accumulator bet (meaning all eight horses had to win their respective races) in 2008.  They did and the 60 year old Craggs, who was celebrating his birthday at the time, should have won £1.4 million (~$2 million), but the institution he placed the bet at had a rule in place that capped the winnings on Craggs’ bet at £1 million.  Technically they could have even reduced it to £100,000, owing to more fine print they had in place, but it would have been a tenuous argument ripe for litigation and would have also been something of a PR nightmare for them, whether they won or lost the case. So they went ahead and just paid the £1 million and also submitted the win to Guinness World Records for consideration.

As for the longest odds paid out on a bet where multiple people bet on a sporting event and won, this *seems* to have occurred when Leicester City won soccer’s Premier League in 2016. They had so little shot at the title that the odds of them attaining it were 5,000 to 1 when the season began. According to reports, bookmakers paid out in excess of $14 million to various individuals on that long shot.

Other notable underdogs who won despite long odds include the 1980 U.S. Men’s Olympic Hockey Team, which took the gold medal from Finland despite being huge underdogs with 1,000 to 1 odds against them.

My St. Louis Baseball Cardinals also beat long odds to win the 2011 World Series. With just 15 games left to play in the regular season, the Cards were 4.5 games behind the Atlanta Braves for the last Wild Card spot, which led bookmakers to set their odds of winning the National League pennant at 500 to 1, and their chances of winning the whole shebang at 999 to 1. The Cardinals then went 11-4 down the last stretch, beat out Atlanta on the final day of the regular season for the Wild Card, and then went on to duke out two nail-biters (literally, I bit off all of my nails that fall) against the Philadelphia Phillies (winning 3-2), and then the Milwaukee Brewers (4-3). The Cards then went on to battle with the Texas Rangers over another seven games, prevailing on October 28, 2011 with a 6-2 win at Busch Stadium before a crowd of 47,399.

Going back a little, in 1981, England defied 500 to 1 odds to defeat Australia in cricket by 18 runs in the Third Ashes Test.

Similarly, Ben Curtis defied 300 to 1 odds in 2003, and the fact that this was his debut at any major championship, to win the British Open Golf Championship.

The odds against Scotland’s Robert Thornton winning the 2012 UK Darts Open were 250 to 1 before he defeated a string of big names, including Phil Taylor in the final.

Defying odds of 11 to 1, an aptly named horse named Upset defeated the famous Man o’ War at the 1919 Sanford Memorial Stakes. Another horse, Mine That Bird, was in last place when field turned for home at the 2009 Kentucky Derby; and yet despite 50 to 1 odds against, Mine That Bird rallied and won the race by 6.75 lengths.

On to boxing, Mike Tyson was considered nearly unstoppable when he faced Buster Douglas in 1990, with odds against Douglas at 42 to 1. Douglas knocked Tyson out in the 10th round.

The most remarkable UFC upset, at least in terms of odds, came on May 24, 2014 when TJ Dillashaw beat +710 odds and Renan Barao in the Bantamweight division when he knocked out the heavily favored Barao in the fifth round.

One of the largest upsets in college football history came on November 14, 2015 when the New Mexico Lobos beat the Boise State Broncos and a 31-point spread, to win 31-24.

One of the most notable upsets in professional football’s championship game happened on January 12, 1969, when the New York Jets defeated the heavily favored Baltimore Colts in Super Bowl III. Well-remembered for Broadway Joe Namath’s improbable boast that the Jets (predicted to lose by at least 9 points) would prevail: “We’re gonna win the game. I guarantee it,” in Super Bowl III, the Jets not only beat the spread, they beat the Colts 16-7.

More recently, when the New England Patriots trailed the Atlanta Falcons 28-12 at the opening of the fourth quarter in Super Bowl LI, the odds against them winning the game were 11 to 1. Throughout the next quarter and-a-half, as the Patriots narrowed the score to 28-20, the odds improved, but soon declined to 16 to 1 when Atlanta took the ball to the Patriots 22 and had a first down and just minutes to go. And yet, in what has been termed by many the greatest (or worst) choke in sports history, rather than scoring the Falcons ended up having to punt after a sack and a holding penalty pushed them out of scoring range. The Patriots then tied the game, pushed it to overtime and scored, winning Super Bowl LI 34-28.