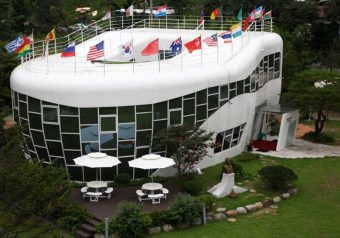 Sim Jae-duck is probably the only person in history who was born in a toilet, lived in a toilet, and died in one, too. Here’s his fascinating story.

In 1996, FIFA, soccer’s international governing body, awarded the 2002 World Cup to co-hosts South Korea and Japan. It had taken decades for South Korea to rebuild after the Korean War (1950–53), and the country had only recently emerged from nearly 40 years of brutal dictatorship. Not many people thought of it as a tourist destination, and hosting the World Cup offered a chance for South Korea to present a new face.

One man who was determined to make the most of the opportunity was Sim Jae-duck, the mayor of Suwon, a city about 20 miles south of Seoul and home to one of the stadiums where the games would be played. Sim thought one of the best ways for outsiders to get to know South Korea would be to live in the homes of its citizens, so he recruited more than 4,000 local families to offer free room and board to visitors during the games. To manage the large crowds that would descend upon the city, he recruited a force of 3,000 security guards and gave them special training on how to deal with the foreign guests. Most famously, he launched a multimillion-dollar campaign to upgrade the city’s public restrooms, a program that earned him the nickname “Mr. Toilet.”

Suwon had more than 700 public restrooms scattered around the city, some operated by the city and others provided by private businesses. Mr. Toilet upgraded them all, providing fresh coats of paint, installing artwork, replacing old fixtures with new ones, and piping in soothing music and perfume-scented air. (He also switched traditional squat toilets to sit-down toilets that Westerners were more used to.) Sim also built more than 30 brand-new restrooms and spent so much money on their design and construction—the restrooms closest to the stadium, for example, were shaped like soccer balls—that 26 of the facilities were designated as tourist attractions in their own right.

Mr. Toilet may have literally been born for the job. South Korean toilet humor is as bawdy as it is anyplace else in the world (which might explain Korean proverbs like “Toilets are like mothers-in-law: the farther away the better”). But tradition also has it that bathrooms are lucky places. Sim’s grandmother was so sure that anyone born in a bathroom was destined to live a long life that she convinced Sim’s mother to give birth in hers. Sim’s mom went through her labor just outside grandma’s bathroom, and when the moment of truth arrived, she stepped inside just long enough for the future Mr. Toilet to pop out.

Improving Suwon’s restrooms proved so rewarding that Sim decided to expand his efforts. In 1999, he created the Korean Toilet Association to push his modernization drive nationwide. Later, he joined the World Toilet Organization, a group dedicated to improving public access to bathrooms around the globe. Then, when Sim concluded that the WTO wasn’t effective enough, he broke away to form his own World Toilet Association in 2006.

As Mr. Toilet campaigned for better bathrooms, he came to believe that some of the taboos associated with toilets were barriers to the improvements he was trying to achieve. That’s why, in 2007, he decided to tackle the problem head on (so to speak), by demolishing the house he’d lived in for 30 years and replacing it with one shaped like a giant toilet.
Sim had made a lot of money in business before going into politics, and had no problem spending more than $1.6 million building his two-story glass and concrete dream house. It’s not an exact replica of a toilet, but it is shaped like a giant toilet bowl and painted white. Just in case anyone misses the point, he named it Haewoojae (“a place of sanctuary where one can solve one’s worries”), a Korean euphemism for the bathroom. For those who were unfamiliar with the expression, Sim put a sign in front of the house that read in English, “Mr. Toilet House.”

ROOM WITH A VIEW

The most prominent feature on the main floor is—you guessed it—a toilet, one of four inside the Mr. Toilet House. This bathroom boasts a floor-to-ceiling clear-glass door that seems to offer no privacy at all. But as soon as a person enters the bathroom, the same electronic sensors that lift the toilet lid and turn on the soothing music also cause the bathroom door to become opaque, giving the user all the privacy he or she needs.
The bathroom opens directly onto the living room, which features a grand staircase that leads to the second floor and the roof balcony, where visitors can peek out over the rim of the Mr. Toilet House.

Because limited access to power, water, and sewage treatment can be barriers to toilet construction around the world, Sim decided to address these issues in the design of his home:

The Mr. Toilet House was completed in November 2007, but before Mr. Toilet and his family moved in, they offered to let anyone spend a night in the house, in exchange for $50,000 in contributions to his toilet-related charities. No takers, but for $1.00, Mr. Toilet offered to let admirers take a quick peek inside (and, if necessary, use the toilet). He raised quite a bit of money for his toilet charities with that offer.

Though Sim was certainly public in his promotion of “Toilet Culture,” as he called it, there were parts of his life that he kept private. Few people knew it at the time, but even as he was building the Mr. Toilet House, he was battling prostate cancer. It was a fight that he would not win: Sim only lived in his giant toilet for about a year before succumbing to the disease. He died at home in the Mr. Toilet House on January 14, 2009. At his request, his family agreed to preserve the home “as a symbol of South Korea’s new toilet culture” by donating it to the city.

In October 2010, the Mr. Toilet House reopened as a museum dedicated to Toilet Culture. Two years later, the city developed the surrounding land into a Toilet Culture Park, featuring exhibits that show the various ways people went to the bathroom before toilets were invented and a gift shop that sells toilet- and poop-themed souvenirs. A sculpture garden filled with statues of squatting men, women, and children also features a reproduction of Rodin’s The Thinker sitting—of course—on a toilet.

In its first four months, the Toilet Culture Park attracted more than 40,000 people, and at last report, it was still drawing huge crowds every month.

But perhaps the greatest honor to Sim Jae-duck’s memory is the fact that the Toilet Culture he created in the city of Suwon is sill thriving. The city spends $14 million a year on its 100 “flagship” public restrooms—that comes to $140,000 per restroom per year, or nearly $12,000 per month.

The immaculate restrooms of Suwon—which to this day bills itself as a “Mecca of Toilet Culture”—must be experienced to be believed. Electronic displays tell visitors which stalls are free, and along with the ubiquitous artwork, soothing music, and perfumed air are “etiquette buttons” that produce pleasant noises when they’re needed to cover…less pleasant ones. Those tiny urinals in the ladies rooms? They’re for mothers with little boys. Some restrooms have floor-to-ceiling windows inside each stall that provide a view of a beautiful bamboo garden beyond; the garden is walled off from the outside world so that it can be enjoyed without fear of anyone peeking into the toilet stalls.

It may seem that $12,000 a month is a lot of money to spend on a public rest-room, but if Mr. Toilet were still around he’d say it was worth it. “At first people asked why I was putting so much money into toilets,” Sim told an interviewer in 2006. “But today they are proud and we have few people complaining.”