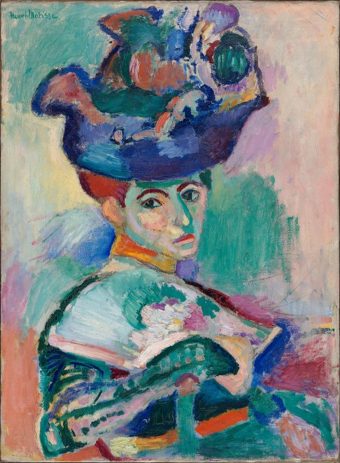 In 1905, a painting shown in Paris shocked the public. Critics reviled it; religious and conservative moralists made speeches against it. The artist who painted it was vilified as a “wild beast” and a victimizer of women. But the painting could hardly be called pornographic. It wasn’t even a nude; it was only a portrait of a fully clothed woman with hat.

While a group of nontraditional painters prepared for a fall exhibit in Paris, their president, Monsieur Jourdain, urged them not to show Woman with Hat. Jourdain considered himself a forward thinker who fought against the narrow-minded traditions of France’s powerful art establishment. But he also knew trouble when he saw it. He warned the group that this modernistic work, by a struggling artist named Henri Matisse, would ruin their exhibition.

When Le Salon des Independants opened its doors and Parisians got their first look at Woman with Hat, they either howled with laughter or gaped in horrified shock. The entire exhibition was derided. Matisse’s painting became the star clown in a three-ring joke. The verdict of the public, and most of the art critics, came in loud and clear. Woman with Hat was outrageous “barbouillage et gribouillage” (smears and scribbles). It was called barbaric. It was an insult to women as well as to art. Matisse and the rest were nothing but fauves…wild beasts.

Woman with Hat was a portrait of Matisse’s wife, Amelie, wearing an enormous, feathered hat. Critics thought the portrait looked strangely unfinished and crude. What shocked them most were those odd, clashing colors that decorated the feathers of Madame Matisse’s hat and illuminated her face. Parisians might be sophisticated, but this painting confused and repelled them. Amelie Matisse was a respectable brunette, but in the portrait she sported brick red hair, an unnatural slash of dark green creasing her forehead, and mint green shading on the bridge of her nose. How could a man paint his wife in such a fashion? Rumors began to fly that all was not well in the marriage of Henri and Amelie.

For Henri Matisse, the scandal was just another dark episode in a painful struggle. Born in Bohain, a poor unlovely, industrial town in northern France, Henri was already a lawyer when he dismayed his working-class parents by deciding that art was his life’s true calling. Painting never came easily to Matisse; he studied constantly. When he failed to break into the prestigious mainstream of French art, his family labeled him an embarrassment with no talent. But Henri, uncertain and depressed as he was, had bigger worries than rejection. By 1905, he was 35, a married man with three children—and he was broke.

He’d pinned his hopes on the 1905 exhibition. A hardworking perfectionist, Matisse believed that at last he was bringing something new and valuable to art—the joy of bright color. He painted Woman with Hat to communicate his own emotions and, he hoped, the soul of his subject. Matisse didn’t portray the true colors of nature because he was determined to paint the colors of the heart.

Amelie Matisse was a rebel with a cause, and her cause was her hubby’s genius. Madame Matisse might not know art, but she knew Henri; whatever he did had to be great. Born in Toulouse in southwestern France, Amelie took Henri to her birthplace. When she showed her husband—a child of the cold, gray north—the hot colors of the south, she changed their lives, and the future of painting, forever.

Henri kept going back to the exhibit, fretting over the jeers and insults. But Amelie stayed at home. She never lost faith in Woman with Hat. The world must change; she would not! And sure enough, slowly, the world changed.

Two American art lovers, Gertrude Stein and her brother, Leo, visited the exhibition again and again, mostly to see Woman with Hat. They knew it was a complete break with tradition, but while others were horrified, they were impressed. A week before the exhibition closed, Leo offered to buy the painting for 300 francs. Henri could hardly wait to get rid of the unlucky canvas. His morale and his funds were very low. But Madame Matisse held out for 500 francs. The extra 200 would buy their daughter’s clothing for the winter. She told her husband to sit tight.

Amelie’s faith in the painting proved justified. Woman with Hat became a turning point for Matisse. Leo Stein not only paid the 500, but he and Gertrude also promoted Henri Matisse among the people they knew (along with another artistic upstart named Pablo Picasso).

The artists of Le Salon des Independants eventually took on the term wild beast with pride, calling themselves the fauve movement. The fuss over Woman with Hat made Matisse famous as well as notorious, and he became a leader of the French avant-garde. In time, the world became excited by Matisse’s revolutionary vision of art. Critics praised him as the creator of modern painting, the liberator of color. In fact, Matisse was so famous and well loved, that some young artists found him too respect able, too bourgeois.

As for Madame Matisse, she later said that she was at her best in crisis, “when the house burns down.” It never surprised her that the world came around to her point of view. Years after her death visitors at the San Francisco Museum of Modern Art still cluster around her portrait, the delightful Woman with Hat.