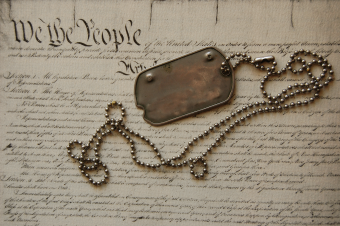 Only 58 percent of the soldiers killed in action during the American Civil War were positively identified. Soldiers had a legitimate concern that if they were killed, their families would never know what happened to them—other than that they were missing in action. As a result, soldiers started writing their name on a piece of paper or a handkerchief and pinning it to their clothing before going into battle. Some soldiers went to the trouble of carving small wooden disks with their names on them, then drilling a hole in the disk and hanging the disk from their necks with a piece of string. Others made their own ID tags by grinding off one side of a coin and then etching their name on it.

Voila! The first modern military ID tags (the Ancient Romans had their own version known as the signaculum)—not called dog tags yet, though.

IF YOU MAKE IT, THEY WILL BUY

Eventually, retail merchants started producing and selling metal disks to soldiers. During the Civil War, Harper’s Weekly Magazine advertised “soldier’s pins” made of silver or gold and etched with the soldier’s name and unit, but some soldiers still made their own ID tags by grinding off one side of a coin and then etching their names on it. Dogs wore similar identification tags, so it wasn’t long before soldiers began referring to their ID tags as dog tags.

The history of tags for dogs goes back to Thomas Jefferson, who wrote the first dog-licensing law for his home state of Virginia—not because dogs were leaving “presents” on his lawn, but because dogs were killing his sheep. The idea was to identify the dog’s owners and make them pay for the sheep they’d killed.

By the 1850s, most localities had dog-licensing laws that required dogs to wear a collar with the owner’s name and license number. Eventually, small wooden or metal disks were used and referred to as dog tags.

By the 1890s, the U.S. Army and Navy were experimenting with metal identification tags for recruits. During World War I, each French soldier wore a bracelet with a metal disk called a plaque d’identité that was engraved with the soldier’s name, rank, and formation. When America entered the war in 1917, all soldiers were issued two aluminum tags that were stamped by hand with their name, rank, serial number, unit, and religion. The tags were suspended from their necks by cord or tape.

HEARST IS THE WORST

In the 1930s, when the government was considering ways to assign Social Security numbers, someone whose name is lost to history suggested that the numbers be stamped on a metal plate and worn like a dog tag by civilians. The idea was quickly shot down by the powers that be. But that didn’t stop Franklin D. Roosevelt’s adversary, William Randolph Hearst, from claiming during the very heated 1936 election campaign that the Roosevelt administration was planning to require everyone to wear dog tags.

World War II dog tags were rectangular with rounded ends and a notch at one end (now stamped by machine). It was rumored that the notch was put in the tag so that the tag could be placed in a dead soldier’s mouth to hold it open so that gasses would escape and the body wouldn’t become bloated. Fortunately, the truth was a lot less gruesome. The stamping machine required a notch to hold the blank tag in place while it was being stamped. The tags were first made of brass and later of a corrosion-resistant alloy of nickel and copper. By the end of the war, all tags were made of stainless steel. They were suspended from the neck by a thin rope, a beaded chain, or a stainless steel wire with a plastic cover.

During the Vietnam War, new stamping machines were used, and the notch was eliminated. Soldiers started taping their tags together so that they wouldn’t make any noise and give away their position. By the end of the war, rubber covers were issued to keep the tags silent. A soldier often put one tag in his boot, in case his body were dismembered so that normal means of identification were impossible.

American-style dog tags are a worldwide phenomenon, thanks to the post-WWII export of blanks and stamping machines by the United States. In fact, during the two Persian Gulf wars, Iraqi soldiers wore dog tags that were identical to their American counterparts—except that the printing was in Arabic.

THE FUTURE IS NOW

The soldier of the future will wear dog tags that hold a microchip containing his or her medical and dental records, and which will be called a Personal Information Carrier (PIC). The U.S. Marines have developed their own version, called the Tactical Medical Coordination System (TacMedCS) that can pinpoint the location of a wounded soldier using the Global Positioning System (GPS).