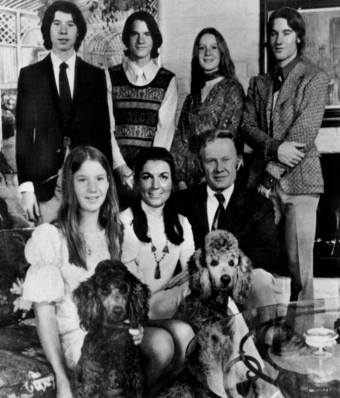 Survivor and The Real World may have seemed innovative at the time they debuted, but they owe a huge debt to a show that hasn’t aired since 1973 and has largely been forgotten, despite being named one of the greatest shows of all time by TV Guide. Here’s the story of the show that started it all.

In 1971 a documentary film producer named Craig Gilbert came up with a novel idea for an educational TV show: film the lives of four American families in four different parts of the country—the West Coast, the Midwest, the South, and the East Coast. A different film crew would be assigned to each family and would film their lives for four straight weeks, from the moment the first person got up until the last person went to bed. Many hours of footage would be filmed, then it would be edited and condensed into four one-hour documentaries, one on each family. The documentaries would be broadcast on PBS.

Television programming was a lot different in those days—for years viewers had been fed a steady diet of decidedly unrealistic family shows like Ozzie and Harriet, Father Knows Best, The Waltons, and The Brady Bunch. Gilbert figured viewers might be interested in a new aspect of American family life: reality.

For the West Coast family, Gilbert chose the Louds, an upper middle-class family living in Santa Barbara, California—parents Bill and Pat, and their five teenage children: sons Lance, Kevin, and Grant, and daughters Delilah and Michele. “They basically said, ‘How would you like to star in the greatest home movie ever made?’” Lance Loud remembered. “We didn’t have to do anything, just be our little Southern California hick selves.”

Gilbert hired two filmmakers, Susan and Alan Raymond, to film the family. Shortly after production got underway, he decided to dump the four-family concept and focus exclusively on the Louds—for a longer time period. To this day it is unclear whether Craig Gilbert knew it at the time, but the Louds’ marriage was in serious trouble (thanks to Bill’s philandering), and their son Lance, who lived in New York, was gay. The Louds had assumed that keeping their family secrets for four weeks wouldn’t be that difficult; but now Gilbert was asking them for permission to film for months on end. Could they withstand this invasion of their privacy?

Bill and Pat thought it over…and decided to take a chance. “I thought I might get away with just saying, ‘These are my children and my kitchen and my pool and my horses, over and out.’” Pat Loud recalled years later. “What naifs we were!”

Bill and Pat need not have worried about protecting Lance Loud’s privacy—he was completely open about his sexuality, even when the film crew was present. He was the very first openly gay teenager ever shown on American television; for many viewers, he was the first out-of-the-closet homosexual they had ever seen.

As for the Louds’ marital problems, they proved both impossible to hide and impossible to repair. As the weeks passed and Pat became more comfortable around the cameras, she began to open up about the problems she was having with Bill. Their marriage continued to deteriorate until finally, a few months into filming, Pat threw Bill out of the house. The Raymonds were there, and they captured it all on film.

By the time the Raymonds wrapped up production, they’d been filming the Louds for seven solid months. They had so much raw footage—more than 300 hours worth—that it took them the better part of two years to edit it down to the 12 one-hour episodes that would air as An American Family beginning in January 1973.

One of the reasons the Louds agreed to allow the film crew into their home in the first place was because they didn’t think many people would ever see the finished product. This was a documentary, after all, and one being made for educational television at that. PBS wasn’t even broadcast in Santa Barbara in 1971 (by 1973, it was); besides, Pat didn’t watch much educational television and she didn’t think anyone else would, either. “We erroneously believed the series would be a simply interminable home movie that no one in their right mind would watch for more than five minutes,” she recalled in 2002. Lance Loud thought of the film as “a very odd, never-to-be-noticed project.”

But when An American Family finally hit the airwaves in January 1973, more than 10 million people tuned in, making it one of the most-watched series in PBS history. The viewers were there for episode 2, when Lance’s sexuality was revealed; they were there for episode 9, when Pat Loud asked Bill for a divorce; and they stayed glued to their sets until the series came to an end in episode 12.

Overnight, the Louds became one of the most famous families in America. They were on the cover of Newsweek (underneath the banner “Broken Family”), they made the national television talk shows, appearing with Dick Cavett, Dinah Shore, Mike Douglas, and Phil Donahue, and their problems were discussed around the water coolers of every workplace in America. Everyone knew who they were.

Today, more than 30 years later, the Louds may be remembered with fond nostalgia, but that wasn’t the case in 1973. Many viewers were stunned by what they saw. The Louds were an upper middle-class family, more affluent than most of the viewers who watched them. Like the fictional TV families people were used to seeing on the tube, the Louds seemed to have it all: They lived in a big, beautiful house in sunny Southern California; they had steady, high-paying jobs; they had four cars, five beautiful children, three dogs, two cats, a horse, a swimming pool—seemingly everything that anyone could possibly want. So why weren’t they happy? Why couldn’t Bill and Pat save their marriage? Why was Lance Loud gay? What on Earth was wrong with these people?

Many viewers—not to mention pundits and TV critics—came to see Bill and Pat Loud as unfit parents and their family as the personification of everything that was wrong with American families in the early 1970s. Newsweek called the Louds “affluent zombies” and described the series as “a glimpse into the pit.” The New York Times Magazine called Lance Loud a “flamboyant leech,” the “evil flower of the family,” and an “emotional dwarf.”

We thought people would be on our side and sympathize with a family responding to all the different moods and trends of the times. But they didn’t sympathize; they misunderstood, thinking that we were arrogant in our stupidity. They were totally wrong.

In the end, nearly everyone associated with the film ended up regretting ever getting involved. Bill and Pat accused the Raymonds of distorting their family life, zooming in on problems and controversies at the expense of everything else. “It seemed that the entire series was all about Lance being homosexual and my husband and I divorcing,” Pat Loud says. “My other four children and their friends seemed to be of no real interest to the editors.”

The Raymonds had their own regrets. Though they did make two more films about the Louds—in 1983 and 2003—they swore off making documentaries about any other family. “It was too brutal,” Susan Raymond says. “We made films on policemen, on a prison warden, on a principal of a school—people who are public officials. But we didn’t do anything on ordinary people or families. We didn’t think they could handle that kind of scrutiny.”

After the show ended, Lance Loud spent several years as the lead singer of a punk rock band called the Mumps, but though his fame brought the band some notoriety, it also made it harder for them to be taken seriously. The Mumps broke up in 1980 and Lance returned to Southern California, where he worked as a freelance journalist, published in magazines like The Advocate, Interview, and Vanity Fair. He also abused intravenous drugs for nearly 20 years, which caused him to become infected with hepatitis. In 1987 he learned that he was HIV positive.

In late 2001, his health failing, Lance checked into an L.A. hospice and called the Raymonds to see if they would document his relationship with his family during this final phase of his life. They agreed. Why did Lance want to do it? Felled by years of unsafe sex and drug addiction, he’d come to see his life as a cautionary tale. But he also wanted to show viewers that for all the problems the Louds had gone through, 30 years later they still loved each other and were close. “He could have asked for a priest or a minister, but he called for his filmmakers,” Susan Raymond says.

Alan and Susan Raymond, credited with filming the first-ever reality TV show, are still making documentaries…but they refuse to watch any of the shows their work has inspired. Anthropologist Margaret Mead predicted that An American Family would come to be seen “as important a moment in the history of human thought as the invention of the novel,” but judging from the shows that have followed it—it’s a safe bet she was wrong.

“Like Frankenstein’s monster, it’s a mixed blessing to be considered someone who spawned this reality TV genre,” Alan Raymond says. “I think it’s a largely superficial, stupid genre of television programming that I don’t think as a documentary filmmaker I take much pride in.”

A Final Note. For all it cost them personally, how much money were the Louds paid for letting a crew film them for seven months? Not much. “The family received no compensation for their participation in the film,” Pat Loud says. “The only money we got was a check for $400 to repair the kitchen where the gaffer’s tape had pulled the paint off the walls.”