Dustbin of History: $am Upham 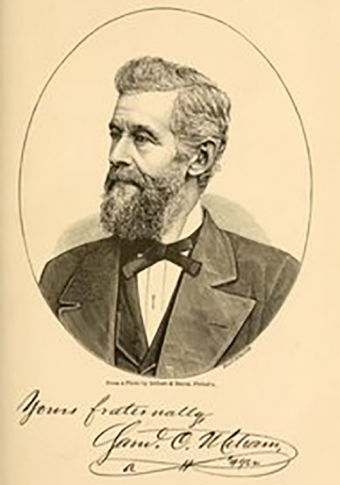 During the U.S. Civil War, New York printer $am Upham crippled the Confederacy’s economy and hindered its ability to fight the war. Yet he was never officially honored, and is all but forgotten now.

Samuel C. Upham never intended to be the most prolific counterfeiter in modern history. In fact, some people insist he wasn’t a counterfeiter at all, but a mere trafficker in souvenirs. In 1850 Upham opened a small patent medicine shop in Philadelphia, selling his own “Upham’s Freckles, Tan & Pimple Banisher” and “Japanese Hair Stain,” as well as newspapers, stationery, toiletries, sheet music, patriotic cards, and other self-published printed goods. He made a modest living for a decade, but then he got lucky: Abraham Lincoln was elected, the southern states seceded from the Union, and soon the Civil War was on. At first, Upham exploited patriotic sentiment by printing novelty cards—for example, caricatures with Confederate president Jefferson Davis’s head on the body of a jackass. They sold modestly well, but it wasn’t like he was printing money.

On February 24, 1862, though, opportunity struck. On that day, he was mystified when all of his copies of the Philadelphia Enquirer quickly sold out and people were clamoring for more. The reason, he discovered, was that the paper had printed a full-size facsimile of a five-dollar Confederate note on its front cover. Most Philadelphians, many with sons in the war, had never seen Confederate money before and were anxious to have a copy as a curiosity and keepsake.

Inspired, Upham ran to the Enquirer office and convinced someone to sell him the copper electroplate of the bill. With it, he printed 3,000 copies on high quality French paper. Upham wasn’t sure if it was legal to print copies of money, even money of a “country” that wasn’t officially recognized by the U.S. government. So to avoid confusion with the real thing (and get some advertising) Upham printed an inscription below the image: “Fac-simile Confederate Note—Sold Wholesale and Retail, by S. C. Upham, 403 Chestnut Street, Philadelphia.”

The bills sold out quickly, so Upham bought some real banknote paper to print his “fac-similes” on. He also began advertising that he’d pay good money for more examples of Confederate money and postage stamps to copy. Within months, he was offering 28 varieties, with denominations from 5 cents to $100, and selling them in his shop for a nickel each. However, his customer base was shifting from local Philadelphians buying souvenirs to mail-order buyers from all over the country, taking advantage of his bulk rate of 50 cents for 100 bills of assorted denominations, with even deeper discounts for larger quantities. One of his many ads, appearing in Harper’s Weekly, read

Upham believed the inscription protected him from prosecution, since he wasn’t fooling any of his customers into thinking they were getting the real thing. However, at some point he must have become aware that nothing stopped them from cutting the inscription off the bottom and passing the “fac-similes” as real. Upham’s bills, with the inscription removed, became very popular with cotton smugglers who bought their wares in Confederate states and illegally shipped them north. (Ironically, because paper shortages in the South had forced the Confederate government to print on flimsy rice paper, Upham’s money, printed on good-quality currency paper, was often preferred to the real thing.)

By April 1862, large quantities of Upham’s bills had been discovered in Richmond, Virginia, the capital of the Confederacy, causing a great deal of alarm in the Confederate Treasury Department. The Richmond Daily Dispatch accused the United States government of sanctioning counterfeiting, and warned its readers against “Yankee scoundrelism…of the most depraved and despicable sort.”

The Confederate Congress responded to Upham and copycat counterfeiters by making counterfeiting a capital crime. One senator denounced Upham as having done more harm to the Confederacy than Union general George McClellan’s army. But the renegade country had no extradition treaty with the United States, so Upham—who later bragged that the Confederacy government had offered a $10,000 reward for his capture or death—didn’t feel particularly endangered. In fact, he claimed that he was doing his patriotic duty by sabotaging the country’s enemy and shortening the war.

Some on both sides of the Mason-Dixon line believed that the U.S. government was behind Upham’s operation, possibly even providing the banknote paper. But in reality, Upham’s counterfeit bills were causing consternation in the U.S. Treasury as well. Some government officials feared that the Confederates would start counterfeiting American money in retaliation and wanted to close down Upham’s printing business. There were already signs that the influx of bad bills was devaluing Confederate currency and destabilizing its economy—what if the same thing happened in the United States?

There was, however, a legal loophole: Since the United States did not recognize the Confederacy as a legitimate country, copying its banknotes—especially with Upham’s disclaimer attached—wasn’t actually illegal. Or at least that was the excuse U.S. Secretary of War Edwin Stanton gave for not interfering with Upham’s business.

While cotton smugglers and others transported the notes into the Confederacy, Union soldiers also routinely carried a king’s ransom of counterfeits for when they pushed into enemy territory. One private stationed in Virginia wrote to his brother back home in Pennsylvania, asking him to send more fake $10 bills: “The boys buy a good many of them around camp for ten cents apiece and after steeping them in coffee to give them color they would take them to the Farmers and pass them for good Confederate Money.”

OUT OF THE MONEY AND INTO THE DUSTBIN

After 18 months, Upham retired from making his “fac-similes,” having printed in the neighborhood of 1,564,050 various bills, totaling nearly $15 million worth of fake Confederacy currency (nearly a half billion dollars in today’s money).

Why did he stop? He was a victim of his own success. First of all, he inspired too many counterfeiting competitors. His counterfeits made up 1–3 percent of the Confederacy’s total money supply, triggering widespread inflation and a deep suspicion about the rebel currency. By August 1863, when he quit his counterfeiting, a Confederate dollar’s buying power was so low that it took $10 to buy what once sold for $1. When Confederate cotton merchants began accepting only U.S. greenbacks for payment, Upham decided the money simply wasn’t worth counterfeiting.

Upham died in relative obscurity in 1885, leaving an estate of $4,889.97—nothing like the millions he’d printed, but still quite a bit of money at the time. And if your heirloom family cache of Confederate dollars turns out to contain only Upham fakes, should you be disappointed? Nope. Among collectors, his counterfeits often sell for more than the real thing.