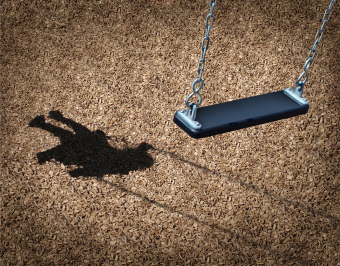 If you were around in the 1980s, you undoubtedly remember them: black-and-white photos of missing children printed on the sides of cardboard milk cartons. Here’s the story of how it all started.

On Sunday morning, September 5, 1982, 12-year-old Johnny Gosch set out from his West Des Moines, Iowa, home before dawn on his Des Moines Register newspaper route. His father often went with him on Sundays, but this time the boy did his route alone, taking only the family Dachshund with him. By 6:00 a.m. the Gosch home was getting phone calls from neighbors: Where were their newspapers? John Gosch, Johnny’s father, got out of bed and went to look for his son. Two blocks from their home he found Johnny’s wagon, full of papers, and the Dachshund standing nearby. Johnny Gosch was nowhere to be found.

Almost exactly two years later, on Sunday, August 12, 1984, an eerily similar tragedy struck the city: 12-year-old Eugene Wade Martin left his home before dawn to deliver the Register. His older brother normally went with him, but not that day. At 7:30 a.m. the route manager called the family to say that Eugene’s newspapers were found at a corner on his route. Eugene Martin had been abducted, and he hasn’t been seen since.

The story of a second boy being kidnapped shook the small Iowa city, and people there did what they could to find them: The Register ran full-page ads with the boys’ pictures and information, and a local trucking company put poster-size images of the boys’ faces on the sides of their trucks. Then, in September 1984, a month after the second abduction, an employee of Anderson-Erickson Dairy asked company president Jim Erickson if there was some way they could help, too. Erickson said yes and, influenced by what both the newspapers and the trucking company had done, he decided to run photos and short bios of the missing boys on the sides of the dairy’s half-gallon milk cartons. That, he figured, would get the boys’ faces onto kitchen tables in thousands of homes in the area every morning. A week later, Prairie Farms Dairy, also in Des Moines, decided to do the same. Tragically, Johnny and Eugene were never found, but Jim Erickson’s idea gave the issue of missing and abducted children a big publicity boost in Des Moines—and it wasn’t long before it became a national phenomenon.

TO THE WINDY CITY

In November 1984, Walter Woodbury, vice president of Hawthorne Mellody Dairy in Whitewater, Wisconsin, one of the biggest milk distributors in Chicago, saw one of Anderson-Erickson’s cartons while on a trip to Iowa. “I thought we could do it in Chicago,” he told a newspaper at the time. “I talked to Commander Mayo [of the Chicago Police Department’s youth division], and he was very enthusiastic. The police thought it was a heck of an idea.” Using the same format as Anderson-Erickson, the dairy’s half-gallon cartons would carry photos and short descriptions of two of the city’s missing children. The photos would be chosen by the police department and approved by parents, and would be changed monthly. Best of all, they would appear on roughly two million cartons every month. Shortly after Chicago’s first missing-children milk cartons appeared in January 1985, the program got the national attention it needed. Good Morning America, The Today Show, and CBS Morning News all covered the story, as did the Associated Press.

Near the end of 1984, Steven Glazer, chief of staff for California state assemblyman (and future governor) Gray Davis, read a newspaper article about the Chicago milk carton program. He thought it was a great idea, and he talked Davis into promoting it as a statewide program. Glazer contacted dairies around the state, and dozens signed up. The program kicked off in early 1985, and photos of missing kids began appearing on tens of millions of milk cartons every month.

California’s program produced results. Glazer says that in just the first few months at least 12 children, most of them runaways, returned home as a result of the campaign. One of the first was a Los Angeles teenager who’d run away to live with friends in Sacramento; she saw a local news report about the program—and saw her own photo on one of the cartons. She decided to go home the next day. And a Los Angeles Times news story on May 23, 1985, reported that of the 14 missing kids from the Los Angeles area who appeared on milk cartons, seven were returned home.

Having a state as large as California take on the program earned it national and even international press, and it was about to get even bigger.

FROM SEA TO SHINING SEA

In late January 1985, the National Child Safety Council (NCSC), a non-profit organization that had been working with police and schools around the country to promote child safety issues since the 1950s, announced that they were launching their own Missing Children Milk Carton Program nationally. The NCSC already had 100 dairies signed up and would soon begin printing information about missing children, along with a national toll-free telephone number, on cartons distributed all across the country. By March more than 700 dairies were involved—and an incredible 1.5 billion milk cartons with images of missing kids on them were being distributed nationwide. In April the NCSC announced that reported sightings of missing children had increased by more than 30 percent.

The success of the program led to many other items being used to display missing kids’ faces over the next few years, including shopping bags, soda bottles, billboards—even bills from power and gas companies.

But as big as the Missing Children Milk Carton Campaign was (and as big a piece of American culture as it remains), it was actually pretty short-lived. A combination of factors, including the fact that many parents complained that seeing the pictures of missing kids everyday was scaring their own children, led to the end of the program after just a few years. “The milk-cartons program ran its course,” said Gaylord Walker, NCSC vice president. “They had a tremendous impact and they did a great job of creating public awareness.” But how successful was the program in helping with the return of abducted kids? Nobody knows for sure—because nobody kept any hard, verifiable numbers on the program as a whole. What we do know is that many runaways and at least some abducted children were returned to their families as a result of the milk cartons—and that, most would argue, made it all worthwhile.

And the idea behind it didn’t go away: The NCSC, along with organizations such as the government-funded National Center for Missing and Exploited Children (NCMEC), continued using a variety of programs to teach parents and kids how to avoid trouble in the first place, what to do if the worst happens, and especially how to get information about missing kids to police agencies and the public as quickly as possible. One of the best-known programs is an electronic version of the milk carton program: the NCMEC’s “Amber Alert” system, implemented nationally in 2002 and named for 9-year-old Amber Hagerman, who was abducted and killed in Arlington, Texas, in 1996. It allows for extremely rapid public outreach on abduction cases via TV and radio stations, email, electronic traffic-and-road condition signs, electronic billboards, and more. So although pictures of missing kids no longer appear on milk cartons, the spirit of the program lives on.