This Day in History: October 19th- A Bust 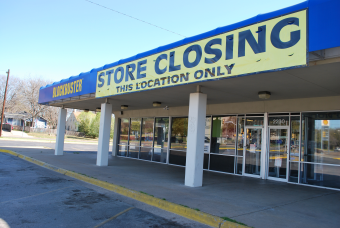 In the early 1980s, video rental stores were small-time operations that offered a very limited selection of titles. At a time when buying pre-recorded VHS movies was prohibitively expensive for many people, renting them was the perfect solution for the dedicated movie fan or couch potato. (See: The Origin and Trademarking of “Couch Potato”) Unfortunately, new releases were very difficult to come by as not only selection, but supplies of individual titles were limited in most rental stores. Waiting lists were common – and often seemingly endless.

Enter Blockbuster, mainly the brainchild of David and Sandy Cook, who ran a company that provided computer software services to the Texas oil and gas industries. When that started to go south in the 1980s, the couple began searching for new opportunities.

Cook and ex-wife Sandy saw the hole in the market left by small, local video rental stores. A little research proved more and more households were investing in VCRs, and the number was expected to double by 1990. VCR technology wasn’t about to be rendered obsolete any time soon (relatively speaking).

Sandy Cook came up with the concept of a video rental superstore, reasoning that if a small store could thrive, a larger one with a much better selection could do even better.

A location with great visibility situated near several upscale apartment buildings was chosen as the site for the first Blockbuster store. When Blockbuster opened for its first day of business on October 19, 1985, there was a long line of eager customers waiting outside. The $800,000 invested (about $1.7 million today) on that first store paid off.

Within a year, Cook had purchased a $6 million warehouse to house and serve as a distribution center for his enormous library of VHS tapes to the now four Blockbuster locations.

One of the (supposed) keys to Blockbuster’s immediate and highly profitable success was their careful attention to demographics. New stores were (supposedly) customized to their neighborhoods. Demographic profiles were conducted in advance so each location could tweak its selection geared to the tastes of the locals (although some say this is a myth created after the fact by the Cooks.)

Whether this was true or not, you couldn’t argue with the numbers. Just two years after founding Blockbuster, in 1987 Cook sold to several investors, including the founder of Waste Management Inc., Wayne Huizenga, for a whopping $18.5 million (about $34 million today). By the end of the year, Huizenga assumed full control of Blockbuster and moved operations to Fort Lauderdale, Florida.

Huizenga embarked upon an aggressive expansion plan for the company, snapping up existing small video rental stores and opening scads of new ones. Within a year, Blockbuster was America’s top video rental chain with over 400 hundred stores nationwide.

By the 1990s, Blockbuster had gone international and was bought up by the media powerhouse Viacom. But technology was changing by the late 1990s with the switch to DVDs and the rising star of Netflix. In 2000, Blockbuster had the opportunity to purchase the fledgling Netflix for $50 million, but famously took a pass, despite Blockbuster having revenues of close to $5 billion that year, with a whopping $800 million from late fees alone. Ouch. (Similarly, Excite had a chance to purchase Google for a mere $750,000 in 1998- at the time Excite’s revenues pushed $150 million per year, but likewise passed.)

Peaking in 2004 with gross revenues at just shy of $6 billion, Blockbuster soon found itself closing more and more stores and ultimately filed for bankruptcy in 2013. Today, all that’s left of the shooting star that was the mighty Blockbuster empire is the remnant “Blockbuster On Demand”, a “[email protected]” (renamed “Dish Movie Pack” in 2015) movie channel package on DISH Network, and a handful of franchise-owned stores that have somehow managed to stay in business.